The media company's share price saw its biggest gains following the announcement that AT&T's (NYSE:T) merger with Time Warner had been granted approval by a federal court judge. The court's ruling signaled a high likelihood that Sinclair will be able to proceed with its planned $3.9 billion acquisition of Tribune Media (NYSE:TRCO). Shares of Tribune Media climbed roughly 6.7% in the month. 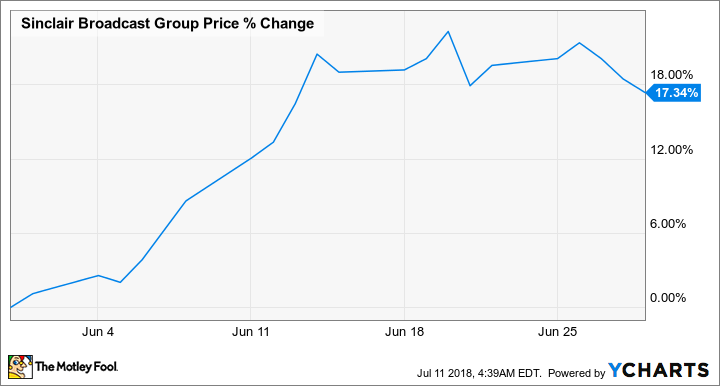 Sinclair stock climbed early in June, corresponding with some notable wins at the Chesapeake Associated Press Broadcasters Association, New York State Associated Press Association, and other regional journalism awards. However, it appears that expectations leading up to the federal district court's ruling in the AT&T and Time Warner merger and eventual granting of permission on the deal were bigger catalysts for Sinclair's rally.

The judge in the case approved the deal on the grounds that the DOJ had not sufficiently proven that the merger would substantially reduce competition, resulting in a business climate that looks much more favorable to large mergers and acquisitions. Sinclair announced its intent to purchase Tribune Media for $3.9 billion in May 2017 but quickly ran into challenges from the DOJ.

The company has since been involved in negotiations to determine how many of its local networks it would need to sell in order for the merger to be granted approval. Sinclair is the largest owner of local television networks and currently owns or operates 193 local television stations across the country and said in April that it would sell 23 stations following the completion of the Tribune deal. Moving forward with these conditions would leave the combined company with 210 local channels across 102 markets.

The Justice Department initially offered not to block AT&T's acquisition of Time Warner if the companies sold off either DirecTV or the Turner networks. However, the federal court's approval of the deal without any conditions suggests that Sinclair and other media companies seeking big deals stand a better chance of doing so successfully -- and possibly without the need to sell assets to get approval.

The chart below tracks the pricing movement of Sinclair, Twenty-First Century Fox (NASDAQ:FOX) (NASDAQ:FOXA) and Viacom (NASDAQ:VIA) (NASDAQ:VIAB) across June and shows corresponding movements that indicate that the new M&A climate was responsible for most of the big media industry stock gains in June. 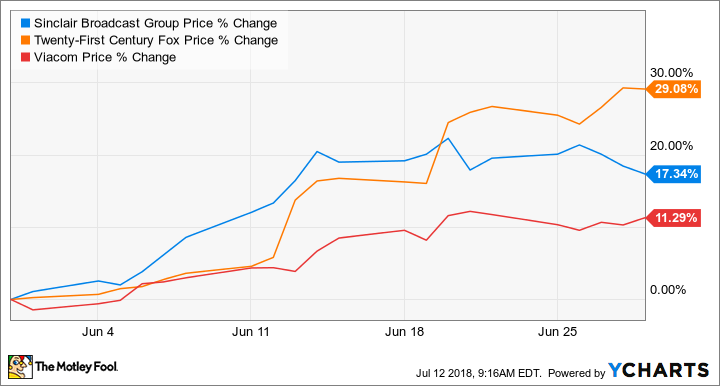 Of the major, large-cap media companies, Twenty-First Century Fox posted the biggest gains, because the AT&T-Warner merger effectively gave the go-ahead for it to be acquired as the company was being courted by two eager suitors. Both The Walt Disney Company and Comcast have pursued Fox's film and television assets (not including sports and news channels, which will be spun off into an entity referred to as New Fox) and been involved in a bidding war and corporate maneuvering to try to close a deal.

Disney opened its bid for Fox at $52 billion, but this offer was topped by Comcast's $65 billion offer in May. The House of Mouse returned to the table with a cash-and-stock offer of $71.3 billion, which Fox has accepted preliminarily. However, the deal still has yet to be approved by both Fox and Disney shareholders, and some analysts and industry watchers expect that Comcast could once again top its rival's offer. Shares of both Disney and Comcast climbed roughly 5% in June.

Viacom stock also benefited from the dramatic shift in the acquisitions climate following the June court decision. Gains were more muted compared to those seen for Fox and Sinclair, but the company's entertainment assets still make it a potential acquisition target for media and technology companies eager to expand their positions in the content space. Viacom owns major television networks, including Comedy Central, MTV, VH1, and Nickelodeon, as well as big film and television properties, including Star Trek, Mission: Impossible, Teenage Mutant Ninja Turtles, and the film rights to Transformers.

CBS (NASDAQ:VIAC) made a roughly $12.4 billion offer for the company in April, but the deal was quickly rejected by Viacom. CBS' bid actually came in nearly 4% below Viacom's market capitalization at the time it was submitted, so it's not hard to see why the offer was rejected. 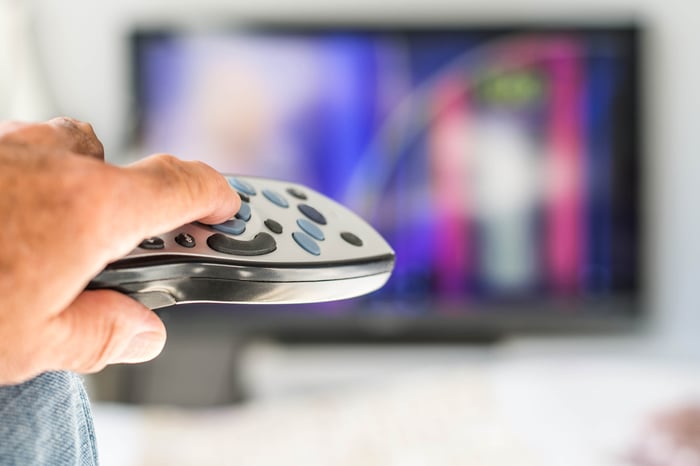 Sinclair and Tribune had previously agreed to sell off some of their television stations upon successful completion of the merger, with Twenty-First Century Fox lined up as one of the major buyers. Sinclair would also retain affiliate deals with many of the spun-off channels, something that opponents of the deal have criticized.

If the conditional deal goes through, Sinclair channels would reach roughly 59% of the country's broadcast households. A deal without sell-off conditions could reach as much as 72% of the country, but that currently appears to be an unlikely outcome. The Federal Communications Commission (FCC) has capped the national household broadcast reach at 39%, but its recent reintroduction of the ultra-high-frequency (UHF) discount rule allows broadcasters to reduce their stated UHF channel holdings by half.

As with other media companies looking to conduct larger mergers and acquisitions, one of Sinclair's arguments has been that these moves are necessary to compete with the expanding technology and media assets of companies like Alphabet and Facebook. On July 5, Sinclair defended the deal again, with a spokesperson stating:

Sinclair's acquisition of Tribune will not radically disrupt the media marketplace or impede viewers' access to quality local news, nor will it violate any FCC rules or policies.

A court decision on the deal could be reached in the very near future. However, groups including The National Association of Broadcast Employees and Technicians, The Rural Broadcast Association, and Newsmax are petitioning to have the decision delayed until an appeals court issues a ruling on the UHF discount rule.