President Donald Trump, as expected, pulled no punches at this week's NATO summit when pushing allies to spend more on their own defense. His rhetoric is likely to produce the uptick he desires, but there's still some uncertainty over how much of that additional spending will end up in U.S. contractors' coffers.

NATO countries agreed in 2010 to each spend at least 2% of gross domestic product on defense, with at least 20% of that total for modernization, by 2024. Trump, who has complained that the United States is taking on an unfairly large share of the burden in protecting Europe, at the summit called for allies to hit that number immediately instead of in 2024, and suggested countries should be seeking to hit 4% of GDP in the years to come. 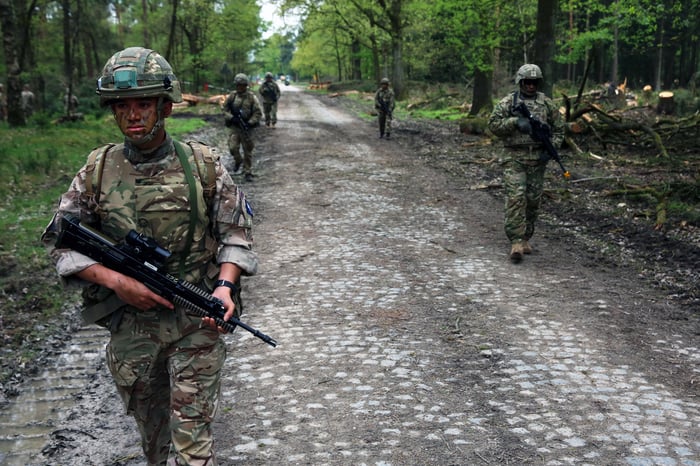 The floodgates are opening

That 4% goal seems like a stretch, as only a small number of countries around the globe spend at those levels. (The United States, for what it's worth, according to the World Bank spends about 3.1% of GDP on defense.) But the back-and-forth between Trump and other leaders made it clear that European defense spending will be increasing.

NATO Secretary General Jens Stoltenberg told reporters, "[W]e have agreed to be committed to the pledge increasing defense spending to 2 percent, and let's start with that."

A NATO report on member spending released ahead of the summit found that currently only five of 29 countries -- the U.S., Great Britain, Greece, Estonia, and Latvia -- are spending more than 2%, though the U.K. and Estonia are missing the 20% modernization target. Three other nations -- Poland, Lithuania, and Romania -- are either closing in on the target or have firm plans in place to get there.

That leaves some of the largest European economies with heavy lifting to do. Based on NATO data, European-ally and Canadian spending would have to increase by more than $100 billion annually to hit the 2% target. Even after accounting for troop spending and maintenance, the 20% modernization goal would suggest countries could eventually spend an additional $20 billion on weaponry platforms and research.

If so, Europe would be part of a worldwide surge in military spending. Trump wants to get the United States -- which already spends more on its military than the next seven biggest spenders combined -- up to that 4% target. In the Middle East, Saudi Arabia, Kuwait, Israel, and others are spending to counter Iran, while Pacific allies leery of China, including Australia and New Zealand, are buying new gear.

Increased demand helps explain why shares of U.S. contractors including Northrop Grumman (NYSE:NOC), Lockheed Martin (NYSE:LMT), Raytheon (NYSE:RTN), and General Dynamics (NYSE:GD) have all more than doubled over the last five years, and suggests that even after that surge more gains are possible. In particular Lockheed Martin and Raytheon, both strong on missile-defense, figure to be big winners in Europe. 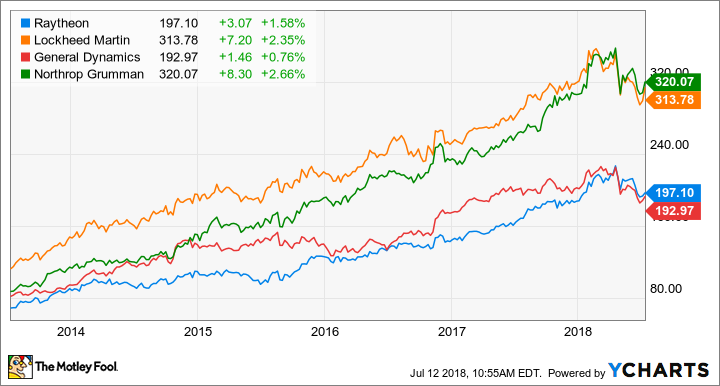 There is risk that Trump's tough talk, coupled with new tariffs on European steel and other goods, could cause NATO allies to look inward when making defense purchases instead of relying on U.S. weapons. German Chancellor Angela Merkel and other leaders could find it easier politically to sell increases in spending as a way to stimulate the domestic economy and lessen Europe's reliance on the United States.

Investors should keep a watchful eye on Germany's planned fighter competition. The country is looking to replace a fleet of 90 1960s-era Tornado jets in a deal worth more than $5 billion to the eventual winner. Lockheed Martin's F-35 is the presumed favorite, due to the plane's stealth characteristics and the desire by the Germans to seamlessly operate with their American counterparts, but local options including an updated Eurofighter made by Airbus (OTC:EADSY) with support from BAE Systems (OTC:BAES.Y) and Italy's Leonardo are also available.

The German defense ministry was already under pressure politically to support the Airbus offering and help ensure the continued production of modern fighters in Europe. Lockheed has promised to work close with German manufacturers to help nurture the local aerospace industry should the F-35 be chosen, but those assurances might mean less now than they would have prior to the tariff decisions.

Germany also has important helicopter and missile support deals on the horizon, two more situations where U.S. companies including Boeing (NYSE:BA), Lockheed Martin, and Raytheon are among the favorites but local pressures could come into play. If Germany does go local, it could encourage other European countries to do the same, potentially leading to the unintended consequence for U.S. suppliers of creating a much more robust European industry far better able to compete against American technology.

The rising tide should lift all boats

In the near term, at least, increased NATO spending should be viewed as good news for U.S. contractors. With top U.S. defense stocks trading at valuations unseen for more than 10 years, the boost would be welcome. 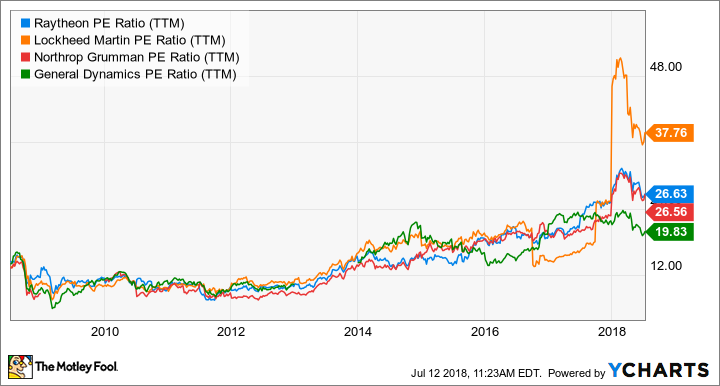 It's hard to say exactly how quickly that $20 billion or so in additional NATO equipment spending might come online, or to handicap exactly how much of it will stay in Europe. But the U.S. contractors are certain to receive some percentage of that increase. If nothing else, the boost will help justify the lofty valuations and offer a counterargument to those who worry that the sector has risen too much.

The big takeaway from the NATO summit is that momentum toward increased defense spending, both in Europe and elsewhere, continues to build. The world's a dangerous place, and the defense titans will find plenty of opportunities to sell their wares all over the globe.