President Donald Trump's decision to impose tariffs on European steel and aluminum comes at a particularly delicate time for major U.S. defense contractors Boeing (NYSE:BA), Lockheed Martin (NYSE:LMT), and Raytheon (NYSE:RTN), with each company vying for at least one of several multibillion-dollar procurement deals in Germany.

Germany is seeking replacement jet fighters and heavy-lift helicopters, and an update to its missile defense systems. For at least some of these deals, U.S. contractors will likely remain the favorites even as trans-Atlantic tensions rise because of a lack of comparable offerings from European companies. 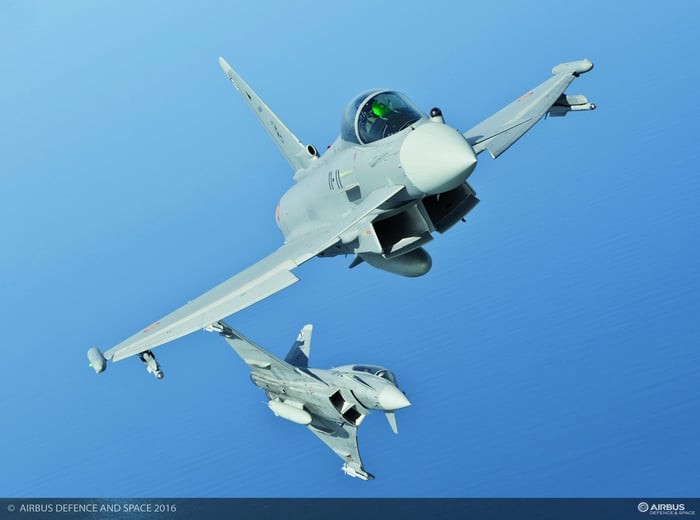 But European governments are increasingly paying attention to where their weapons are sourced from, and mindful of protecting and growing their domestic industries. That could make U.S. contractors the long-term losers no matter who wins these latest contracts.

Here's a look at Germany's shopping list, and a breakdown of how Trump's tough talk could influence decisions and lead to changes in procurement policy.

A shot in the arm for Eurofighter

Germany in April received the first round of bids to replace its fleet of 90 1960s-era Tornado fighter jets, a deal that would likely be worth more than $5 billion to the eventual winner. Lockheed Martin is pitching its state-of-the-art, but expensive, F-35 against either the F-15 or the F/A-18 from Boeing and an updated version of the Eurofighter by Airbus (OTC:EADSY) with support from BAE Systems and Italy's Leonardo.

Early handicapping had the F-35 as the favorite, due to the plane's stealth characteristics. But the German defense ministry even prior to the tariffs was under significant pressure from politicians to support the Airbus offering and help to ensure the continued production of modern fighters in Europe. Picking the Eurofighter would also help save on maintenance costs since the ministry already has a fleet of more than 100 older frames.

Lockheed has tried to counter that pressure by highlighting the strong working relationship between the U.S. and its European allies, promising to work closely with German industrials to help nurture the local industry and make sure Europe doesn't lose any capabilities. Those assurances are likely worth less now than they would have been prior to Trump's tough talk and tariffs, and Germany and all of Europe have more reason than ever to keep their domestic manufacturing base strong.

Strained relations with the U.S. might end up being the edge the Eurofighter needed in this competition.

The German government in December signed off on a plan to spend about 4 billion euros ($4.68 billion) on up to 60 new heavy-lift helicopters designed for humanitarian aid, troop transport, casualty evacuation, and related missions.

The competition was expected to be a slugfest between Boeing and Lockheed Martin's Sikorsky division, with the latter in February enlisting German industrials company Rheinmetall as a local partner in a bid to boost its CH-53K King Stallion entrant. Boeing is countering with its CH-47 Chinook.

Airbus seemed unlikely to be a major factor in this competition because German officials have said they want a low-risk helicopter with a track record, and the European aerospace giant doesn't currently offer a product that fits the need. The company has instead pushed for a management and maintenance role in the project, something that Airbus Executive Vice President Wolfgang Schoder told reporters last year was essential to "the future of the German helicopter industry."

Of all the programs Germany is considering, the helicopter remains the most likely to go to a U.S. bidder. But the risk to Boeing and Lockheed is that if relations continue to grow worse between the U.S. and Europe, the German government could be tempted to give Airbus time to develop its own competing offering. That could cost either Boeing or Sikorsky a key win in the near term, and create a strong new competitor with a ready-made European customer list to compete with over the next decade.

Lockheed and Raytheon have been jockeying for years over a German contract to replace an out-of-date version of Raytheon's Patriot missile defense system with a newer option. A consortium led by European aerospace companies pitching a system developed with $4 billion worth of funding from Germany, Italy, and the United States was selected in 2015, but the government and the contractors have been haggling over details of the program ever since.

Lockheed formed a joint venture with the consortium, known as MBDA, earlier this year, to serve as prime contractor for what would be a multibillion-dollar order. Lockheed also hopes to use success in Germany to battle Raytheon and the Patriot for other contracts in Europe.

As with fighters and helicopters, European leaders are increasingly focused on building up their domestic missile capabilities instead of relying on the United States for help. A separate short-range air defense contract worth about 2 billion euros ($2.34 billion) is expected to go to either Diehl Defense of Germany or France's Thales, with talk of more closely coordinating German and Dutch defense efforts.

If that relationship grows and countries better coordinate defenses, it could shrink the number of markets for new missile defense systems, or at least for the total number of units any one country might order. If that were to happen, it would reduce demand from a region that U.S. companies saw as primed for growth only a few quarters ago.

From friends to frenemies?

While all these potential contracts are large enough to move the needle for the eventual winner, none are make-or-break for any one individual company. The real issue isn't a single win or loss for Lockheed, Raytheon, or Boeing, but rather the risk that after decades of relying on United States-made weaponry, Europe is being pushed to venture out on its own.

New programs are expensive and filled with uncertainty, and there is no guarantee that even if European governments tried to break away from U.S. armaments those efforts would be successful. But given that U.S. defense primes are increasingly pursuing foreign sales to insulate themselves from Washington budget battles and find new sources of revenue, a vibrant and growing European aerospace sector is a long-term threat to those growth plans that investors need to be cognizant of.

Trump bills his tough talk on tariffs as a way to protect American jobs. But in the case of the defense sector, his rhetoric and actions create far more risks than opportunities. Germany will be an important battleground for investors to monitor.