The defense titan, already a leader in international sales, will need global growth if it is to sustain its lofty valuation.

Add Sweden to the growing list of customers for Raytheon's (RTN) Patriot air defense missile system, a fresh shot in the arm for the defense contractor as it searches globally for new business. 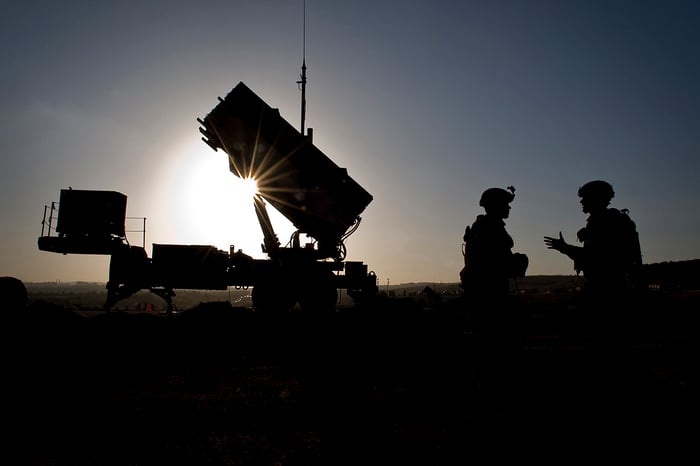 A Patriot missile battery at a Turkish military base in Gaziantep, Turkey. Image source: U.S. Army, via Flickr.

The Swedish government said Tuesday that Raytheon's system had beaten out the SAMP/T platform from Eurosam GIE, a joint venture between Airbus affiliate MBDA and Thales Group. The government valued the contract at about 10 billion Swedish crowns, or more than $1.2 billion, and expects to begin taking delivery by 2020 toward a goal of having the system operational by 2025 at the latest.

While the U.S. is by far the world's largest spender on defense -- accounting for $611 billion of the $1.686 trillion in 2016 global military expenditures, according to the Stockholm International Peace Research Institute -- U.S. contractors stung in recent years by budget battles and political gamesmanship at home have increasingly been looking to mitigate domestic risk by selling overseas.

Raytheon already stands out among its peers in this regard, with about 32% of second-quarter total sales and 35% of bookings coming from international customers. Lockheed Martin and Northrop Grumman, by comparison, generated just 27% and 15%, respectively, of total 2016 revenue internationally.

This is Raytheon's second big Patriot win in Europe this year, following a July announcement that Romania would buy the system and other U.S. armaments. Raytheon now has more than a dozen international customers for its Patriot system, providing new potential sources of ongoing revenue even after delivery is complete thanks to maintenance and upgrade opportunities.

Michael Tronolone, director of Raytheon's European missile business, at a Defense News conference in September said he is seeing increased interest from countries, including some that previously considered the Patriot to be unaffordable. He said the growing book of business for the Patriot is helping to drive down overall costs of the program, opening it up to additional customers.

Each win can make future competitions easier. The Swedish government said its Armed Forces "advocated Patriot as a new air defense system" because it's "a proven system with good delivery reliability and anti-ballistic missile capability." That assessment will surely be noted in Poland, where the Patriot system is currently under review.

Defense stocks have risen dramatically over the past year in part thanks to growing optimism that after years of partisan Washington battles, Republican control of both the White House and Congress would lead to an uptick in Pentagon spending. Raytheon in particular has had a good year, with shares up 37% in the past year.

Increased spending in future years does appear likely. But so far, revenue growth has eluded the industry. And even accounting for the long-term nature of defense contracts, there is some cause for concern that the stocks have gotten ahead of themselves and a barrage of new dollars spent on weapons systems might not materialize at the levels many are hoping for.

Raytheon is currently trading at 2.22 times sales and 26 times trailing-12-month earnings, well above historical averages and nearly twice its P/E ratio as recently as mid-2015.

Obviously, it's going to take a lot more than a couple of missile system deals in Europe to sustain such lofty valuations, but these contracts are, if nothing else, steps in the right direction. Raytheon investors should be encouraged to see the company's international momentum continuing to build.