Please ensure Javascript is enabled for purposes of website accessibility
Log In Help Join The Motley Fool
Free Article Join Over 1 Million Premium Members And Get More In-Depth Stock Guidance and Research
By Lou Whiteman - Nov 4, 2017 at 10:31AM

Defense primes are trading near all-time highs on anticipation of a Pentagon spending spree that hasn't yet occurred. Is it time to scale back expectations?

Defense stocks have rocketed to multi-year highs in 2017 on expectations of increasing revenue from a growing Pentagon budget. Nine months into the year, and most companies are still waiting. 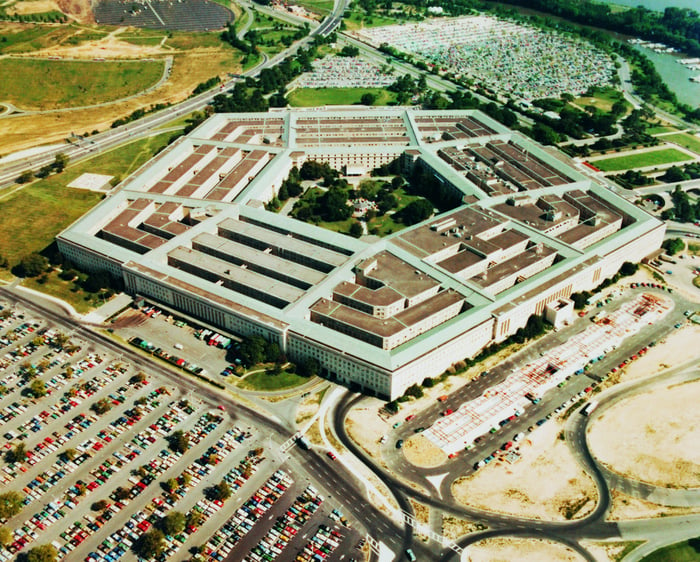 An aerial view of the Pentagon. Source: Getty Images.

After weathering years of budget battles between Republicans in Congress and the Obama White House that culminated with sequestration -- and a freeze in defense spending -- in 2013, the defense industry was expecting a bounce back following the GOP sweep of the White House and Congress last November. Stocks reacted accordingly, with shares of defense titans Lockheed Martin (LMT 0.05%), General Dynamics (GD 0.53%), Northrop Grumman (NOC 0.67%), and Raytheon (RTN) all up between 18% and 31% year to date, and Boeing, with its mix of defense and commercial aerospace, climbing more than 60%.

But for all the enthusiasm, the actual results so far have failed to match expectations. Lockheed Martin, the nation's largest defense contractor, generated third-quarter revenue that fell short of analyst estimates and predicted flat sales to modest growth in three of its four businesses in 2018. Boeing and General Dynamics, meanwhile, reported defense sales down 5% and 1%, respectively, from last year, with Boeing also using "flat" to describe next year. Raytheon's quarter included a beat on earnings per share, but a miss on revenue relative to expectations.

Have investors in defense stocks gotten ahead of themselves? 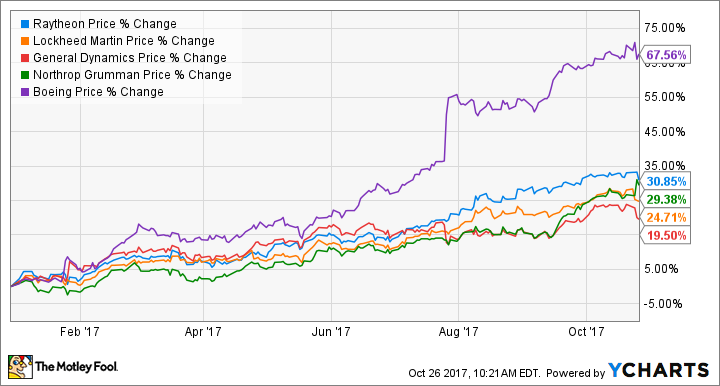 It takes time to turn a battleship

The lack of revenue growth, in part, can be explained by the complexity of the defense procurement cycle, with long, drawn-out bids and multi-year payoffs from contract wins. This year, politics has also played a part, with the transition at the White House causing the Pentagon to move slower than usual.

General Dynamics CFO Jason Aiken said during a conference call with investors that "the change in administration" was responsible, in part, for slowing execution on some new contract awards. The comments come three months after company CEO Phebe Novakovic complained that delays in the new administration filling vacancies in key positions at the Department of Defense was slowing new contracts and delaying execution on existing programs. "Without the appointments, it is difficult to process contracts and get authorized and appropriated funds obligated to contracts," Novakovic said at the time.

Since Novakovic made those comments, some of those vacancies have been filled. Most notably, Ellen M. Lord was named Under Secretary of Defense for Acquisition, Technology and Logistics in August, and is responsible for weapons purchases and overseeing the Pentagon's acquisition program.

But there are still obstacles to be navigated. While the Pentagon's fiscal 2018 budget is expected to rise, it's still unclear exactly where it will end up, with the Senate ($611 billion), House ($593 billion), and White House ($575 billion) all requesting different amounts. Those differences need to be reconciled, and thanks to the Budget Control Act's sequestration, any amount that exceeds the current caps -- which all three requests do -- will require new legislation.

On Lockheed Martin's third-quarter call, CEO Marillyn A. Hewson warned that if the current continuing resolution funding the government extends beyond its current December 8 planned sunset, she would anticipate an impact on 2018 orders. "We continue to urge our lawmakers to work toward an agreement, which modifies the budget caps, provides the defense funding required to capitalize our military assets, and delivers to our military the resources vital to our nation's security," Hewson said.

Even the Pentagon has spending limits

It's also possible that the extent of the Pentagon buying spree has been overestimated. While the Department of Defense has identified certain immediate needs, including replenishing its supply of Tomahawk missiles and smart bombs, there are limits to how much the government has to spend and competing priorities for those dollars.

The Administration proposal calls for an increase of 9.9%, or $52 billion, over the 2017 Pentagon base budget, and some of that funding is earmarked for non-procurement priorities, including reversing prior-year troop reductions. Factor in that the big-ticket weapons program awards, which move the needle for defense primes, are spaced out over multiple years and tend not to provide a huge boost to any one particular quarter.

The companies insist that even if the near-term forecast is for flat sales, longer-term confidence is still warranted. Boeing CEO Dennis A. Muilenburg forecasted on his company's call "stable to moderate growth through the decade" for the defense business.

The rise in equity values has been anything but moderate. The quarterly results and forecasts suggest that, while prospects for the defense industry will improve post-sequestration, the market likely has gotten ahead of itself in pushing valuations skyward.

It's difficult to predict when momentum will turn. At the very least, however, it would behoove investors to be more selective and try to pick winners among defense players instead of bidding up the entire sector.