Please ensure Javascript is enabled for purposes of website accessibility
Log In Help Join The Motley Fool
Free Article Join Over 1 Million Premium Members And Get More In-Depth Stock Guidance and Research
By Lou Whiteman - Feb 11, 2018 at 8:13AM

The aerospace giant partners with Rheinmetall on a potential $5 billion procurement deal.

Lockheed Martin (LMT 2.05%) is enlisting local help in a competition with Boeing (BA 5.64%) over a nearly $5 billion contract to supply heavy-lift helicopters to Germany.

Sikorsky, the helicopter company Lockheed Martin acquired for $9 billion in 2015, has signed a strategic teaming agreement with Rheinmetall (RNMBY 1.07%) to compete for the German Air Force "Schwerer Transporthubschrauber" helicopter program. The German government in December signed off on a plan to spend about 4 billion euros ($4.9 billion) on up to 60 new helicopters, with the Sikorsky CH-53K King Stallion and the Boeing CH-47 Chinook expected to be two of the main combatants.

The contract is expected to be awarded by 2020, with deliveries set to begin in 2023. The new order would replace an existing fleet of Sikorsky CH-53G helicopters for use in humanitarian aid, troop transport, casualty evacuation, support of special operations forces, and combat search-and-rescue missions. 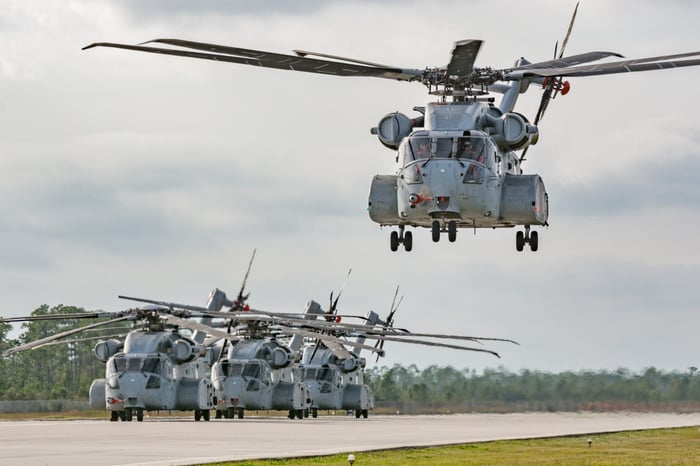 Friends on the ground

The competition comes at an interesting time for U.S. contractors, who in recent years have scrambled to build their international orders as a way to offset the risk posed by Washington budget battles. But would-be European buyers have been somewhat put off by President Trump's rhetoric demanding that NATO allies increase defense spending, leading some politicians in Europe to demand that their governments focus their spending on domestic companies and not U.S. suppliers.

Rheinmetall is an auto-parts and military supplier with 5.6 billion euros in sales in 2016. The company sells and maintains a range of air defense, military truck, and troop protection systems, generating about 147 million euros in EBIT (earnings before interest and taxes) on sales of 2.9 billion euros in 2016 from its defense operations.

"With Rheinmetall as the strategic partner for Sikorsky, we are convinced that together we provide the best possible state-of-the-art aircraft for the German Air Force as successor for the legacy CH-53G fleet," Rheinmetall CEO Armin Papperger said in a statement. "Furthermore, we stand strongly together in offering a cost-effective, reliable solution oriented to the needs of today's operations, and able to evolve with the Armed Forces as its needs change over time."

Rheinmetall will take the lead on local maintenance of the aircraft and on training, and Sikorsky said other supporting German partners would be named in the coming weeks. Boeing for its part is also talking up its local connections, noting that it already works with more than 100 companies in Germany on various programs, and saying that a CH-47 win would create additional work for its existing supply base in the country.

The German contract would be a significant spark for the CH-53K, which, although larger and more powerful than the CH-47, is also likely to cost more. Boeing is marketing the Chinook based on its familiarity, since it's already in use by eight other NATO countries, but the design is older and would likely require significant upgrades in future years.

The King Stallion, meanwhile, is a new design based on a legacy platform Germany is familiar with; it features the latest and best technologies for survivability and onboard diagnostics. The helicopter is expected to be fully operational and in use by the U.S. Marine Corps by 2019, and Sikorsky could use momentum from a win in Germany in planned competitions in Israel and in Japan.

Lockheed bought Sikorsky as part of a broader campaign to diversify itself as the F-35 fighter -- a program that could generate more than $1 trillion in revenue over the rest of the century -- ramps up production. The jet already accounts for more than one-quarter of the company's revenue, and Lockheed showed last year that delays to the F-35 could cause quarterly results to miss expectations.

The company is not forecasting much growth outside of airplane manufacturing through 2018. If that is to change in future years, Lockheed is going to have to post wins in competitions like Germany's Schwerer Transporthubschrauber. Teaming with Rheinmetall is an important step toward accomplishing that goal.