The last year has been a good one for owners of Toyota Motor Corporation (NYSE:TM). Shares are up 20% in the last 12 months, not including the current 3.4% dividend yield the company pays. While the stock may look like a good income investment, investors looking for something a little extra would be better served looking elsewhere.

A global manufacturing leader past its prime?

After a post-financial crisis boom in sales, which made Toyota the world's largest auto manufacturer, the company has struggled to gain traction ever since. Revenue is still off its 2012 peak, and share prices have been treading water for years. 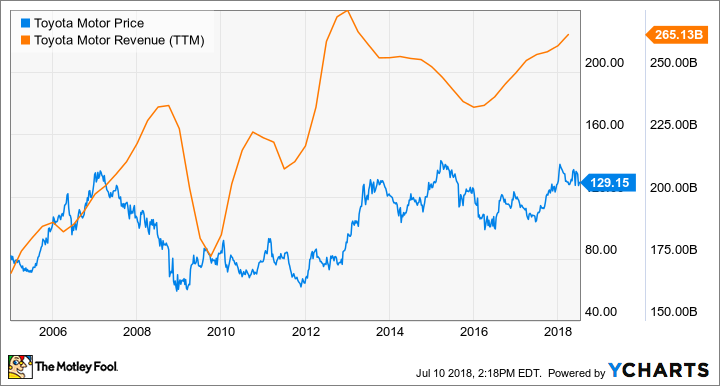 While global unit sales declined during Toyota's 2017/18 fiscal year, total revenue did increase by 6.1%, and operating income increased by 20.3%. However, it's important to note that over half of that operating profit gain was attributed to currency fluctuations to Toyota's benefit. Most of the balance could be chalked up to cost reduction efforts. There's nothing wrong with that, but with global auto sales continuing to edge higher, it's concerning that the company couldn't make some headway in a more tangible way.

For the foreseeable future, that could be as good as it gets for Toyota. Management thinks its global unit sales will be slightly down again in the year ahead, and competition has been steadily building as rivals like Volkswagen and the Renault-Nissan-Mitsubishi alliance vie for the best-selling carmaker title.

The future of Toyota

During Toyota's last earnings release, President Akio Toyoda talked about the company's strategic priorities going forward. Top of the agenda is more cost reduction. In a competitive auto industry where high manufacturing expense is always a problem, it's an important component in driving profits higher and keeping enough cash on hand to invest in new vehicle production. Controlling costs has become key for another reason, though: disruption from technology companies.

Toyoda talked about how technology companies are now the top threat to Toyota and other automakers. With the ability to change strategy quickly and with lots of funding from investors, businesses that specialize in ride-sharing, self-driving vehicles, and vehicle electrification are transforming the industry. Toyota is responding by partnering with some these companies to stay relevant in a fast-changing world and slowly transform itself into a "mobility company" rather than just a carmaker.

Some examples of that strategy in action are Toyota's $1 billion investment in Grab -- Southeast Asia's ride-hailing service -- as well as the unveiling of a concept self-driving box-on-wheels for mobile retail and transportation of goods dubbed the e-Palette. Some of those initiatives could take years to start producing any tangible results, though. In the nearer term, changes in vehicle lineup like the new Camry, the upcoming redesign of the best-selling RAV4 SUV, and the addition of all-electric vehicles will be the more visible changes at the company.

Continuing to refresh its vehicle offerings while testing the waters for the future of transportation is a strategy every other automaker out there is adopting. Toyota's sales have struggled, and much of the company's profit increases have been driven by factors outside its control. Plus, with a trailing price-to-earnings ratio of 8.6, Toyota is already valued higher than most of its peers.

That leaves the dividend payment, currently yielding 3.4%. However, even that payout can be topped by some of Toyota's industry rivals like Nissan, Ford, and General Motors. Thus, while Toyota could be a good addition to an income-generating portfolio, there don't appear to be overwhelming reasons to purchase shares at this time.