Toyota Motor Corporation (NYSE:TM), which has lagged rivals in embracing fully electric vehicles, said on Monday that it will introduce "more than 10" battery-electric vehicles worldwide by the early 2020s.

Those battery-electric vehicles are a key component of its strategy for keeping pace with the industry's transition to zero-emission drivetrains. Here's what we know. 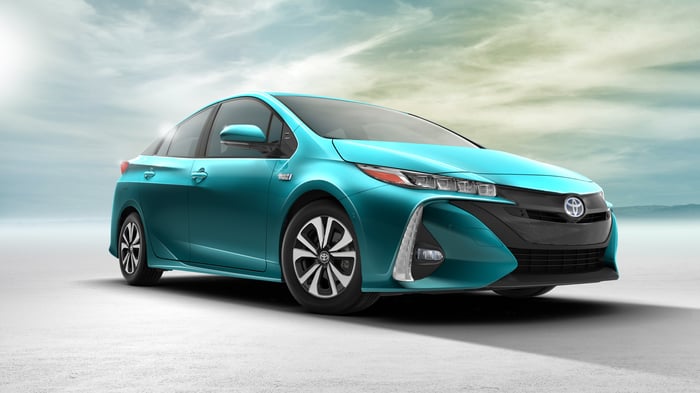 Toyota has sold more gasoline-electric hybrid vehicles than anyone, but it has lagged rivals on fully electric vehicles. Image source: Toyota Motor Corporation.

Toyota presented its new strategy as a component of its goal, first introduced in 2015, to reduce average new-vehicle carbon dioxide emissions by 90% from 2010 levels by 2050.

Toyota said that it aims to have sales of more than 5.5 million electrified vehicles by "around 2030," including more than 1 million zero-emission vehicles (BEVs or FCEVs).

Getting there will require a lot of batteries, and Toyota's strategy didn't neglect that point. As announced last week, Toyota and Panasonic (OTC:PCRFY) are exploring the possibility of a battery-manufacturing joint venture. Toyota is also working to develop next-generation solid-state batteries, and is hoping to bring those to market by the early 2020s. (More on that below.)

Last but not least, Toyota said that it will invest in what it calls "social infrastructure" to support these new vehicle types: Charging stations, hydrogen refueling stations (for its fuel-cell vehicles), and systems to reuse and recycle batteries.

How much will all this cost? About 1.5 trillion yen ($13.3 billion) by 2030, executive vice president Shigeki Terashi said during a presentation to analysts and media members on Monday. The company expects at least half of that money to be spent on battery development, he said.

Where Toyota stands in the global electric-car race

Toyota helped pioneer hybrid vehicles, and it has sold more hybrids than any other automaker. But Toyota executives have been skeptical of battery-electric technology for a long time, arguing that consumers would be reluctant to buy battery-electric vehicles because of the costs and the long recharging times.

Rather than investing in battery-powered vehicles, the company has pushed hydrogen fuel cells instead, arguing that a fuel cell is a "better battery" because it can be "recharged" (by refilling the vehicle's hydrogen tank) in about the same time it takes to fill an internal-combustion vehicle's tank with gasoline.

But I think reality has dawned on Toyota: Many other global automakers, including its three largest global rivals, have announced big bets on battery-electric technology, putting Toyota at risk of falling behind -- at least in the minds of investors and the public.

China, where the government is working to hasten the adoption of fully electric vehicle technology, gives Toyota (and its rivals) some assurance that it'll achieve the sales needed to justify the up-front investments. It also provides another kind of nudge: Chinese automakers and battery companies are making huge investments in electric-vehicle technology; if the global auto giants don't do the same, they could find themselves left behind.

Another factor may be at work here: Toyota may be on the verge of a battery breakthrough. It has been working for years on "solid state" batteries, which (unlike existing designs) don't overheat and don't pose a fire risk. They may also be cheaper to manufacture at scale. If Toyota can perfect the technology before rivals do, it may come to market late -- but with a significant advantage.

We should also give some credit to Tesla (NASDAQ:TSLA). If nothing else, by showing a desirable path to a zero-emission future, Tesla's success has inspired the big automakers to get moving on electric-vehicle technology (or scared them into it, at least).

The world isn't going to switch to electric vehicles overnight. There will still be a market for internal-combustion-powered vehicles for decades to come. But that market will likely start shrinking soon, first in China, then in Europe, and then in the United States, India, and elsewhere, as buyers increasingly choose electric vehicles over the gas-burners.

I think Toyota has recognized that reality, and the plan it announced today is probably enough to keep pace in those key markets, at least in the near term. And if it does turn out to have an ace up its sleeve (like those solid-state batteries), it may not suffer a penalty for being "late" in the long run.