Ford Motor Company's (NYSE:F) sales results in China, the world's largest automotive market, have been cringeworthy all year long. Investors have witnessed the company's sales in the region plunge 25% year over year through the first half of 2018, with little hope other than the promise of new vehicles and a fresher lineup a year from now. The bad news? Its sales decline steepened last month, and the scenario could worsen before it improves.

Ford's data doesn't tell an investor-friendly story. June sales in China dropped a staggering 38% compared to the prior year, barely topping 62,000 units. June's result is the fourth time through the first six months that Ford's sales failed to top 70,000 -- something that happened only once in each of 2016 and 2017. When the data is graphed, you can see a clear stagnation and worrisome trend: 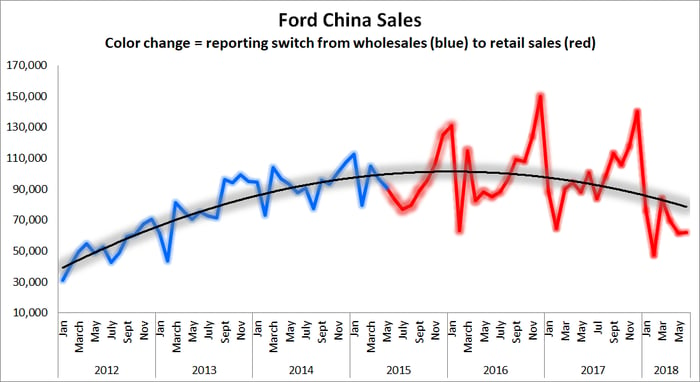 Those following Ford's production cycle likely saw this ahead of time, as the company trudges through a period with fewer new vehicles in its portfolio while awaiting new launches in 2019. The simple truth is that Chinese consumers are calling it like they see it: Ford's vehicle portfolio isn't as fresh as that of the competition.

"Looking forward to the second half of the year, we will continue to bring our strategy to life by further strengthening our relationships with our partners and dealers, providing our customers with more choices and nurturing our local team for a bigger, better and brighter future for Ford in China," said Peter Fleet, Ford China's chairman and CEO, and president of Ford Asia-Pacific, in a press release.

More specifically, Ford is hoping its China 2025 Plan gains traction sooner rather than later. Blue Oval launched the new Mustang and new Ranger Wildtrak in China recently and will unleash the all-new Focus and new Escort before year's end.

The pain could get worse

Sadly, for Ford investors who have endured a weak year in China, things could get worse before they get better. After President Donald Trump escalated trade tensions by imposing tariffs on $34 billion worth of Chinese imports, including auto parts, China retaliated with $34 billion on American goods, including U.S. light-vehicle imports, increasing that tariff from 15% to 40%.

These tariffs threaten one of Ford's few bright spots in China last month. While Lincoln's sales volume was less than 10% of Ford's total China sales, it was at least a 12% improvement over the prior year's result. Lincoln was set to gain even more momentum with the all-new Lincoln Navigator gaining traction with consumers, and launches of the new MKC and all-new Nautilus on the way. Here's the bad news: Lincoln has no plans to produce any units in China -- a move that would bypass the import tariff -- until late 2019, and of the 80,000 vehicles Ford sent to China from North America in 2017, roughly half were Lincoln products. If Ford raises prices (so far management has said it won't), it will hurt demand and likely stall Lincoln sales. If Ford doesn't raise Lincoln prices, it will be forced to absorb the tariff costs, which will erode the otherwise juicy luxury-vehicle margins. The silver lining for investors is that while import tariffs could stall Lincoln's progress -- high-margin sales that are desperately needed to boost profitability in a market far less profitable than North America -- Ford produces a vast majority of its namesake and joint venture products in China and won't be impacted much. The tariffs sure won't help Lincoln catch its crosstown rival General Motors (NYSE:GM), though. GM's Cadillac sales in China are surging, up a whopping 29.2% year to date compared to last year, and the brand has topped 100,000 units compared to Lincoln's 24,314. Furthermore, GM produces Cadillacs locally, avoiding pain from the tariff escalation.

Assuming trade tensions don't worsen -- an assumption we can't make at the moment -- 2018 should be as bad as it gets for Ford investors. Ford has a wave of new models launching next year and plans to drop 50 new models in China by 2025, vehicles which management believes will drive revenue 50% higher over that time frame. Ford's China 2025 Plan is good news because the company needs to convince investors it has a sales growth story as well as a Lincoln expansion strategy to help drive profitability in its most opportune market. So far, it's doing the opposite.