"Your margin is my opportunity."

Amazon (NASDAQ:AMZN) has set its sights on another much smaller competitor, this time in a food and beverage space where it hasn't traditionally been a powerhouse. National Beverage's (NASDAQ:FIZZ) LaCroix brand was simply too popular and profitable not to try to upend, so Amazon is introducing its own version of the product under Whole Foods' 365 brand. Amazon can also leverage Whole Foods to help with distribution across the country, augmenting the online store.

We don't know yet if the Amazon/Whole Foods version of flavored seltzer water will be successful, but it's a warning for any company thinking its profit margins are safe in an Amazon world. 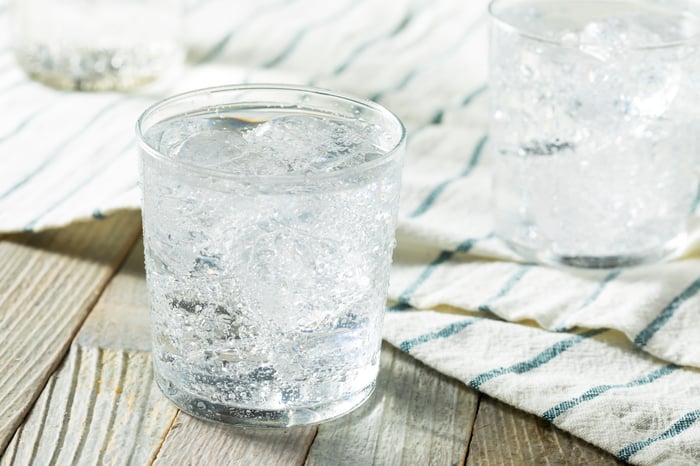 Why National Beverage is a target

If margin is where Jeff Bezos sees opportunity, he's seeing a lot of opportunity to disrupt National Beverage. The company has managed to grow rapidly as LaCroix's popularity has increased. It has raised prices along the way, driving gross margin higher. 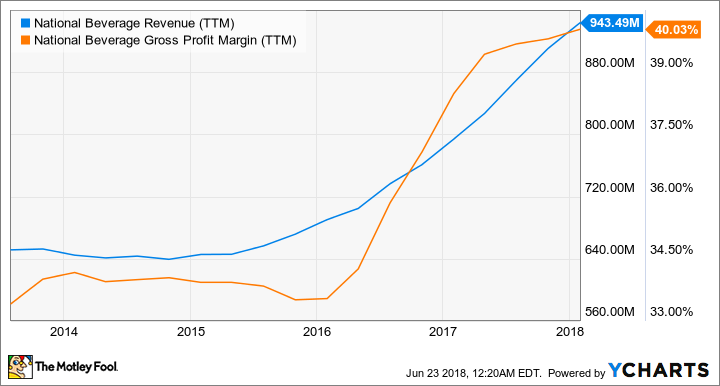 The gross margin increase is what has made National Beverage a target for competitors, including Amazon.

Others have tried to take on LaCroix, with little success, but Amazon may be in a unique position to succeed. With Whole Foods under its wing, Amazon is quickly growing distribution channels and services like Prime Pantry. The formula is simple: Get consumers used to buying sparkling water online from Amazon, and then get them to switch to a less expensive Amazon product.

AmazonBasics shows the formula. The private label brand was launched in 2009 and now includes more than 1,500 products and accounts for over $450 million in sales. A report from Jumpshot estimates that Amazon accounted for 61% of all conversions to private labels online, so as online shopping for groceries grows, we will likely see Amazon try to push customers away from LaCroix to the Whole Foods 365 brand.

We don't know yet how long it will take for Amazon to capture a meaningful share of the sparkling water market. But if batteries, home improvement tools, and skin care products are any indication, it could be quick. Amazon owns 97%, 93%, and 91% market share of online sales for those three product categories, respectively. The growth of e-commerce, Prime Pantry, and private labels within Amazon suggest that National Beverage will start losing market share to Amazon very soon. 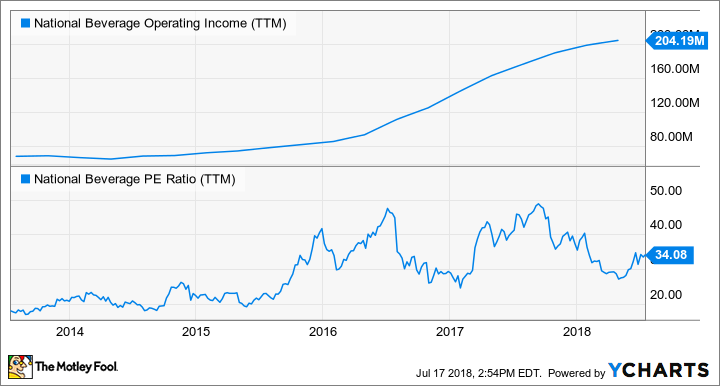 If margins fall, profit growth could slow or even stall, which would be terrible for the stock. National Beverage's current P/E ratio of 34 is nearly double the market average, implying high expectations, whereas National Beverage may see net income decline because of Amazon's competition.

National Beverage has been on an incredible run, both operationally and in the stock market, because of its wildly popular LaCroix flavors. But as the company grows and raises prices to expand its profit margin, flavored sparkling water will become an attractive business for competitors like Amazon to enter. Amazon and Whole Foods may have a winning strategy to put pressure on the brand with local distribution through grocery stores, Prime Pantry, and a large private label business.

Amazon isn't a competitor I would want to fight against, especially in a market where it has built-in distribution, like beverages. I think the downside from lost revenue growth, margin pressure, and (eventually) a falling P/E ratio will be too much for investors to ignore.

LaCroix may be popular with millennials today, but if an equally tasty alternative comes along that's cheaper and more convenient to buy, the draw of switching may be too much to pass up. That's why I think it's time to sell National Beverage stock.