Shareholders of small-cap biotech Cara Therapeutics (NASDAQ:CARA) have had a bumpy ride the last couple of years. Hopes were flying high in early 2017, only to be dashed about a year ago by a failed trial of the only drug in its clinical pipeline. But developments in recent weeks have removed some uncertainty for investors, along with the risk that goes with it. In fact, the path forward has never been clearer for the company.

Cara is developing CR845, recently named Korsuva, to treat pain and pruritus (severe itching). It is an opioid, but is differentiated from drugs like morphine or fentanyl by the fact that it attaches to a different type of opioid receptor in the periphery of the body, at the origin of pain or itching, rather than working in the central nervous system. It also doesn't easily cross the blood-brain barrier, and therefore doesn't have the addiction potential and side effects of today's opioids.

The company has tested the drug in indications for acute pain, chronic pain, and pruritus. After a failure last year in a test for chronic arthritis pain, the company has pivoted to focus on pruritus associated with chronic kidney disease, where test results have been strongly positive. There are no Food and Drug Administration (FDA) approved medications or standard of care for pruritus, and Korsuva has been granted a Breakthrough Therapy designation from the FDA, which means the agency will expedite approval of the drug.

Clinical testing is also continuing for acute pain after surgery, but as a second priority. 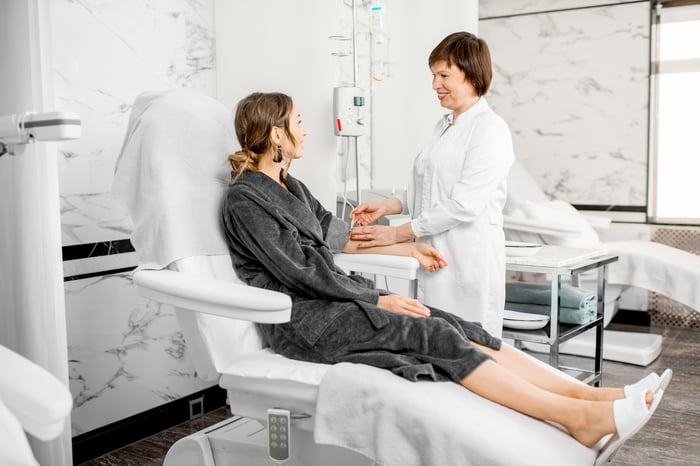 In May, Cara announced a partnership with Vifor Fresenius Medical Care Renal Pharma Ltd. (VFMCRP) to commercialize Korsuva. The agreement grants VFMCRP a license to sell the drug as an injection for the treatment of chronic kidney disease associated pruritus (CKD-aP) in dialysis patients worldwide, except for the U.S., Japan, and South Korea. In return, VFMCRP will pay Cara $50 million up front and up to $470 million in milestone and regulatory payments, buy $20 million in newly issued stock at $17 per share, and pay Cara tiered double-digit royalties once the drug is on the market. The deal takes risk out of Cara Therapeutics stock in three ways.

First of all, the agreement is a huge vote of confidence in the eventual success of Korsuva in treating pruritus. VFMCRP is a joint venture between Vifor Pharma Group and Fresenius Medical Care (NYSE:FMS), a $30-billion market cap company that is the worldwide leader in dialysis care. Last year, Fresenius Medical Care treated about 10% of the 3.2 million dialysis patients in the world in 3,752 clinics. Outside the U.S., the company treated 127,000 patients in what is by far the largest international network of dialysis clinics.

Pruritus is a serious problem for dialysis patients; 60% to 70% of patients in dialysis experience the condition, and nearly 20% get a severe form that is associated with lower survival. The fact that Fresenius has chosen Cara Therapeutics as its partner for treating the condition and is willing to pay a big price up front for the privilege is a very strong statement about the drug's commercial viability.

Second, the partnership answers the question of how commercialization will be financed. Going into the year, Cara had enough cash on hand to carry it into the first half of 2019, but it was clear that wasn't going to be enough to get Korsuva across the finish line for any indication. The cash deal and the small number of shares in the equity sale (for which Fresenius paid a 47% premium over the market price the day before the announcement) accomplished the financing of commercialization with less than 4% share dilution.

Third, the relationship gives the company a way to build momentum for a U.S. launch. Cara still owns full rights for Korsuva in the U.S. for all indications, and worldwide rights for oral formulations of Korsuva. The partnership with VFMCRP gives Cara a ready-made channel to develop domestic sales of the drug.

Fresenius' largest market is the U.S., where it treats about 38% of all dialysis patients. The agreement is for VFMCRP and Cara to jointly promote injectable Korsuva in Fresenius Medical Care clinics in the U.S., with profits being shared equally between the two companies. What's essentially a discount on Korsuva for Fresenius in the U.S. will cost Cara some margin, but should give it a way to rapidly ramp up domestic sales, while it focuses on marketing to the remaining 62% of dialysis patients in other clinics in the country.

A positive result for acute pain

Late in June, Cara Therapeutics announced positive top-line results from its phase 2/3 study of IV Korsuva for post-operative pain. The trial tested two different doses of Korsuva versus placebo in 444 patients who had either undergone ventral hernia surgery or a hysterectomy. The trial achieved statistical significance for the primary endpoint of pain relief within 24 hours for the arm receiving the higher dose. There also was a 73% reduction in vomiting in patients on the higher dose, with a significant reduction in post-operative nausea and vomiting impact scores.

The successful trial is another risk-reducer for the stock, and opens the door for advancing the drug for acute pain indications. With the failure of the chronic pain trial last year, investors faced uncertainty about whether Cara would ever be able to get approval for Korsuva for pain. But the results from this trial would seem to confirm that the drug's pain reduction mechanism is working as expected. Another phase 3 trial will be required, and Cara said it will be consulting with the FDA on the path forward clinically.

But aside from the fact that the drug met the pain reduction endpoint, the reduction in nausea and vomiting may end up being just as important. Post-operative pain is a huge opportunity, with more than 46 million inpatient and 53 million outpatient surgeries performed annually in the U.S. alone. With markets this big comes plenty of competition, and the nausea and vomiting results may enable some differentiation.

Korsuva may actually be anti-emetic (or help suppress vomiting). Emesis is controlled by the aptly name vomiting center, which is in the fourth ventricle of the brain. The fourth ventricle is outside the blood-brain barrier, so Korsuva reaches it, and the drug may actually have a direct physiological mechanism that is suppressing nausea and vomiting. In a conference call, Cara CEO Derek Chalmers suggested that the drug may be a broad anti-emetic that could have applications beyond the post-surgical setting, such as in treating chemotherapy-induced nausea and vomiting.

In pruritus in hemodialysis patients, Cara has already launched a phase 3 clinical trial in the U.S. and plans to start a pivotal global trial soon.These studies are the shortest path to a commercial launch of Korsuva. They will be paid for by the Fresenius deal, and the earlier one could read out on the primary endpoint in Q2 of next year. Since the drug has the Breakthrough Therapy designation from the FDA, an expedited approval process may result in the drug going on the market in late 2019 or early 2020.

Longer term, Cara has a lot of other opportunities for Korsuva related to itching. It has started a phase 2 trial of oral Korsuva for patients in earlier stages of chronic kidney disease and a phase 1 trial for patients with pruritus caused by chronic liver disease, and is working on plans for studying the drug for itching caused by psoriasis. In the U.S. alone, nearly 45 million people are diagnosed with diseases known to trigger pruritus.

In post-operative pain, there may be a longer path to commercialization, as the company has said that it will continue to prioritize the itching indication over pain. Most likely, Cara will form another partnership to advance the drug in this indication, and the announcement of a deal and any encouraging outcome from FDA discussions could provide further impetus to the stock.

Is the stock a buy here?

The stock is hitting 365-day highs now, and there is still no guarantee that the company's only drug in clinical development will make it onto the market. But the stock has been substantially de-risked in the last two months, and I don't think the market has fully recognized that. Shares are still about 23% below their all-time high, which was set in a few, admittedly over-euphoric days last summer. The picture is a lot clearer now, and the failure of the chronic pain trial has turned out not to be so important, with other, lower-risk paths to commercialization unfolding for the company.

Shareholders who got scared out of the stock in the last year missed out on an 88% gain since May 22. With a market capitalization of only $714 million for a company that has a reasonable chance of success in some big opportunities, there is still plenty of upside possible from here. Of course, we won't really know how big the opportunity is until we get a clear sense of pricing and market size, but the stock is selling at a discount to previous highs while also having fewer question-marks. That seems like a potential winner to me.