It's been a rough year for the former Dupont subsidiary now known as Chemours (NYSE:CC). After seeing its stock price surge in 2016 and 2017, Chemours shares have stagnated over the past 12 months, and even fallen -- lagging the performance of the S&P 500 by more than 17 percentage points. That's quite a strange result given that last quarter, for example, Chemours sales surged 20% year over year and its profits doubled.

In the opinion of analysts at RBC Capital, it's also the wrong result. 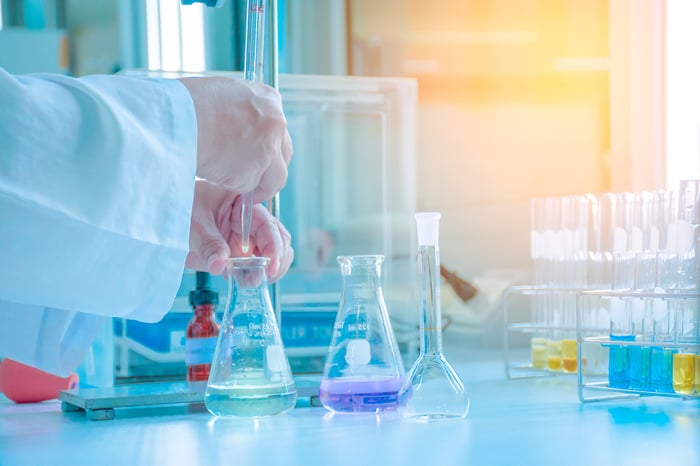 RBC thinks it's got the right formula for success in chemicals stocks. Image source: Getty Images.

Chemours stock should be outperforming the S&P, RBC Capital said in a note covered on Street Insider (subscription required).

Chemours comprises three main businesses: chemical solutions (the smallest unit at $571 million in trailing revenue), titanium technologies (the largest at $3 billion, according to data from S&P Global Market Intelligence), and fluoroproducts -- $2.7 billion in annual sales, and the focus of RBC's buy thesis today.

At $44 a share, Chemours shares currently cost a mere 7.3 times this year's expected earnings of $6 a share. As RBC argues, this greatly undervalues Chemours' fluoroproducts business in particular, which is expected to exhibit double-digit percentage "structural growth" through 2025. It also, in the analyst's opinion, bakes in an expectation that Chemours' titanium business will suffer a massive 25% decline in the price of titanium dioxide, which currently averages $3,200 a ton.

A valuation of 7.3 times earnings certainly does sound cheap, especially when you consider that most analysts who follow Chemours stock do not expect earnings to decline, but rather to grow more than 50% this year, and to grow a further 18% in total over the next two years (so about 9% annually). Combined with Chemours' modest 1.5% dividend payout, this suggests Chemours stock really is trading at a discount.

Granted, there are caveats to this argument.

Debt is one. Chemours carries $2.7 billion more debt than cash on its balance sheet, so its apparent $7.9 billion market capitalization is perhaps better viewed as a $10.6 billion enterprise value.

When you value Chemours on its enterprise value and free cash flow, therefore, the stock turns out to have an EV/FCF ratio of more than 30 -- which looks significantly less cheap than the stock's apparent 7.3 P/E ratio.

Do chemicals investors have any better stocks to choose from? They do -- and in fact, RBC named an alternative pick at the same time as it was recommending Chemours stock today: Chemicals maker Huntsman (NYSE:HUN).

Huntsman also compares favorably to Chemours on debt and free cash flow. Huntsman carries only $1.9 billion in net debt for example (50% less than Chemours). And helping to keep debt levels low, it's a prodigious producer of cash -- $1.2 billion in free cash flow generated over the past year, which is 45% more than the $834 million it reported in GAAP net income. (So for every $1 in profit Huntsman reports, it actually puts $1.45 in its bank account.)

Analysts see little difference between the growth rates of the two companies. According to S&P Global stats, Huntsman is predicted to grow only perhaps 1 percentage point slower than Chemours, with a five-year projected growth rate averaging just under 8%.

At nine times trailing earnings, with an enterprise value less than eight times FCF, and a dividend yield of 2.1%, I think Huntsman offers investors the better value in chemicals stocks. This one's a winner.