Booking Holdings (NASDAQ:BKNG), the owner of several popular travel-related sites, including Priceline and Kayak, said this week that it has invested $500 million in Chinese ride-hailing giant Didi Chuxing.

It's a coup for Didi, which is undertaking an aggressive global expansion. And it almost certainly raised some worries at Didi's archrival, Uber Technologies.

It's more than just an investment

There's more to this deal than a straight-up investment by Booking Holdings in Didi, although that investment is significant. The two companies also announced a partnership that, among other things, gives Booking Holdings' brands the ability to offer on-demand car service through their apps -- and that will integrate two of Booking Holdings' services into the Didi app. 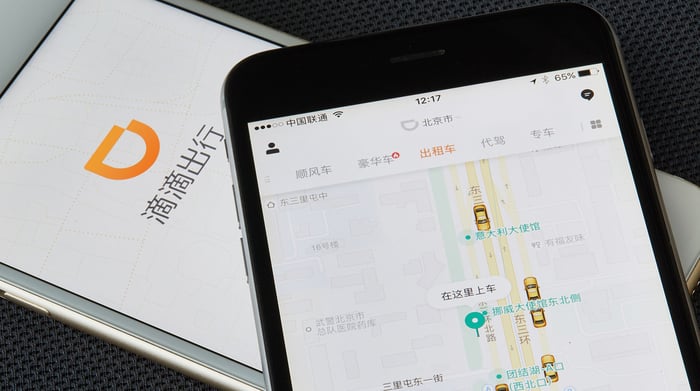 Users of all these apps could soon have one-click access to ride-hailing services, courtesy of Didi and its global network of partners. Likewise, users of Didi's app will have the option to book hotels through Booking.com or Agoda, the companies said.

Booking Holdings' corporate development chief, Todd Henrich, talked about the attraction of Didi for his company:

"Didi has clear advantages in technology and scale in the shared-mobility industry. We believe that together we can offer smarter transportation services to our brands' customers, and help Didi's customers with seamless access to the products and services the brands in our company provide throughout the world."

It's clear that this is a nice move for Booking Holdings, one that will give two of its sites exposure via an app that's wildly popular in some parts of the world. But aside from the investment, what does Didi get out of this deal?

What Didi gets is another piece in its quest to turn its app into a global one-stop shop for travel and mobility services.

Although much of Didi's business is still in China, the company has made investments in other regional ride-hailing companies, including Grab (in Southeast Asia), Ola (in India), 99 (in Brazil), and Lyft (in the U.S.). Significantly, those relationships are also partnerships that help Didi (and its partners) retain their customers when they travel: Didi's customers can use the Didi app to hail a Lyft in the U.S., for example, and vice versa. This new partnership with Booking Holdings builds on that.

Didi has become a key hub in the increasingly interconnected world of ride-hailing. It has acquired some heavy-hitting backers, including Apple (NASDAQ:AAPL), which invested $1 billion in Didi in 2016, and SoftBank Group (OTC:SFTBF), which invested $4.58 billion last year.  Of note, SoftBank, like Didi, also holds significant stakes in Ola, Grab, and 99 -- and it's Uber's largest investor.

(SoftBank's Vision Fund also has an indirect connection with Lyft: It's an investor in General Motors' self-driving subsidiary, GM Cruise, and GM invested $500 million in Lyft in 2016.)

As I said above, it's not hard to see why this is a good deal for Booking Holdings: It puts two of its apps in front of a huge new audience.

But it's also not too hard to see why it's a good deal for Didi Chuxing. It is carefully assembling the pieces to become a global travel-and-mobility powerhouse. It's already close to becoming a one-stop shop for Chinese citizens traveling both in China and abroad (and for foreigners traveling in China, too). As it integrates more tightly with regional mobility partners like Ola, Grab, and Lyft, it could well relegate Uber to also-ran status -- even in markets like the United States.

Long story short: Didi has already beaten Uber decisively in China. Increasingly, it looks to be outflanking its California rival globally as well.