In terms of vehicle sales volume, China is the land of opportunity. In fact, it's expected to carry the global auto sales market higher over the next decade as North America and Europe plateau. For years, foreign automakers have rushed to get their foot in the door, and China has forced them to partner with Chinese automakers in joint ventures to play ball.

Among other things, that joint venture scenario has cut profitability, but with China's recent decision to allow foreign automakeros to own more than 50% of their joint ventures, as rules are phased out through 2022, it could enable automakers to bring more of their profits home. BMW (OTC:BAMXF) is first in line to negotiate.

Let's take a look at BMW's recent development and whether its negotiation for more ownership will set a precedent and indirectly aid General Motors (NYSE:GM) and Ford Motor Company (NYSE:F) in similar moves. 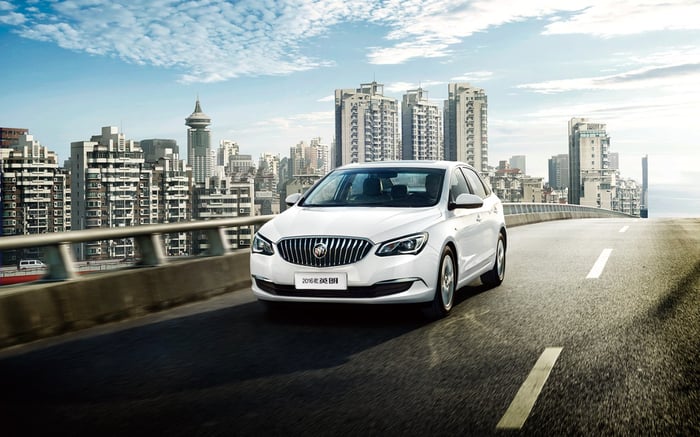 More of the pie

BMW is first in line to own a majority stake in a Chinese joint venture. The German automaker currently owns 50% of its joint venture with Brilliance China Automotive Holdings and is rumored to be boosting that ownership up to 75%, according to Manager Magazin, although BMW has declined to officially comment on the discussion. If and when this ownership increase takes place, likely 2022 when the last of the ownership rules are phased out, it could set a precedent for other foreign automakers to flex their muscles and ask for higher ownership -- and thus more profits.

This could change business for automakers in China as they know it. While China is the world's largest automotive market in terms of sales volume, its profitability pales in comparison to that of North America. Consider that in 2017 General Motors sold more vehicles in China -- it topped 4 million sales for the first time there -- than it did in the United States. However, General Motors generated $11.9 billion EBIT-adjusted in North America while its equity income from China was $2 billion.

Part of the reason China is less lucrative than the U.S. is their respective sales mix. Through June, cars generated only about 33% of total light-vehicle sales in the U.S., and that figure continues to shrink as more and more Americans are driving higher-margin SUVs and trucks off dealership lots. And while demand for larger vehicles and SUVs is rising in China, in general, the sales mix favors less profitable passenger cars outside the U.S. For some context, SUVs and crossovers made up just over 1 in 3 vehicles sold globally last year, which is still triple their share from only a decade ago (according to the auto research firm JATO Dynamics), but a far cry from the more lucrative U.S. sales mix. If GM were able to negotiate for more ownership of its joint ventures, it wouldn't directly boost margins but would allow GM to take a larger percentage of the total joint-venture profits.

Unfortunately, investors shouldn't get their hopes up despite BMW setting a precedent for such a move, because GM has arguably the deepest roots with its joint ventures of any foreign automaker.

"Foreign companies may already be in a box [in China]," said James Chao, Asia-Pacific chief at consultancy IHS Markit, noting the joint venture partnerships are so ingrained that foreign autos might not want to change it, according to Automotive News. "While getting a bigger share could be advantageous in terms of boosting profits, they may actually be already too dependent on their Chinese partners to sever those ties."

China's market can be difficult to navigate, both through government regulations as well as fickle consumers, and insights shared by foreign automakers' joint venture partners are highly valuable in understanding both of those aspects. Furthermore, of the 4.04 million vehicles GM delivered in China last year, 53% of those were under the Wuling and Baojun brands. If GM were to go it alone and drop SAIC, which produces Buick, Chevrolet, and Cadillac with GM, or perhaps negotiate for more ownership that is seen as unfair and could sour relationships, it would likely cause GM to lose Wuling -- the latter is mostly owned by SAIC.

Ford finds itself in a similar position to GM, with pretty deep ties and almost 1.2 million sales in China last year. Ford has also recently inked a deal with Chinese automaker Zoyte Automobile Co. last year to deliver less expensive electric vehicles. Of all Detroit automakers, Fiat Chrysler Automobiles may be in the best position to benefit from the change in ownership rules down the road. FCA was late to the game in China, doesn't exactly have strong ties with its partners, and only produces three products locally -- the Cherokee, Renegade, and Compass -- with sales just barely topping 146,000 units last year.

So while investors can dream of a day when GM brings back more profits from China, those ties appear too important at the moment to disrupt. GM's joint ventures aren't likely to change from the status quo, but could set the stage for it to own more of its future driverless and electric vehicles in China -- and that is excellent news for long-term GM investors.