The secret to GM's booming sales.

General Motors said that its sales in China rose 7.8% in February, outpacing the overall market, despite fewer selling days because of the timing of the Lunar New Year.

Year to date, GM's sales in China are up 12%, outpacing most global rivals' year-over-year gains -- and far outpacing a dramatic sales decline for Ford Motor Company. 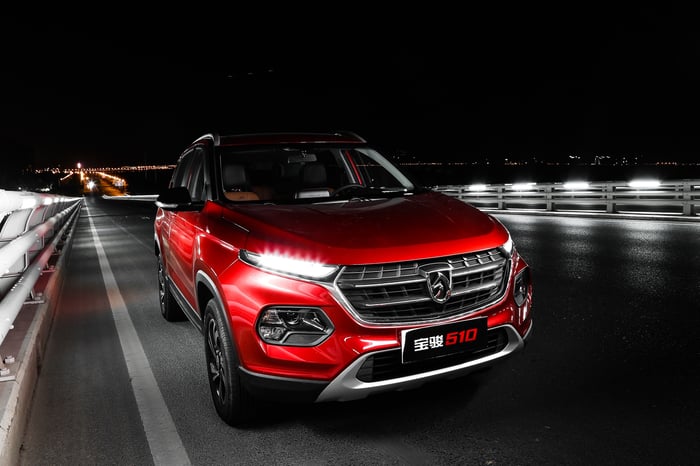 The affordable Baojun 510 crossover SUV has been a huge hit for GM in China. Image source: General Motors.

How GM is faring against key global rivals in China

Evaluating monthly sales results from China in the first two months of the year requires a little local knowledge. Specifically, we need know that the Chinese New Year is a lunar holiday. It sometimes falls in January, and sometimes in February.

That's important because businesses (like car dealers) generally close for several days around the holiday. When the holiday week falls in January one year and February the next, monthly sales results get confusing.

The best way to cut through that confusion is to evaluate results from the first two months of the year combined. When we do that, we see that GM has kicked off 2018 with some nice sales growth, outpacing its big-name global mass-market rivals.

Data source: The automakers, Automotive News. Year-to-date sales are through Feb. 28. Overall figures are for all light vehicles sold in China during the period and are approximate.

It's hard to miss that the chart has one big outlier: Ford. The Blue Oval's sales in China have been falling sharply for months, but the decline seems to have accelerated in 2018. Ford is working on a turnaround plan that will bring new models and better distribution to its China effort, but the problems will take time to solve -- and that gives rivals like GM an opportunity to gain ground.

That's exactly what GM has been doing. Cadillac sales have boomed in China, driven in part by big demand for the XT5. Image source: General Motors.

GM's recent success in China has been driven by a few different things:

It's almost easier to list the things that aren't working for GM in China right now. The big one is Wuling, a brand that for years sold small, inexpensive commercial vans. The market for such vans has shrunk significantly as China's building boom has trailed off. Baojun has responded by revamping its products as inexpensive minivans, with windows and passenger seats, under the Hong Guang sub-brand.

The sheer number of companies selling vehicles in China means products become stale more quickly than they do elsewhere. GM has responded with a steady stream of strong new products, and more are on the way. GM has said that it will launch 15 new or refreshed products in China this year, about half of which will be SUVs or minivans.

At least one has the potential to be a big hit: The upcoming new Cadillac XT4, a compact luxury crossover that is expected to arrive at dealers in China (and the U.S.) in the second half of the year. Given the strong sales of the XT5 since its launch, the new one-size-down Cadillac is likely to find a lot of eager buyers -- and help keep GM's growth streak going.