It's essential for Ford investors, or potential investors, to understand how vital the F-Series is to the automaker's success.

Pick a year -- any year -- of Ford Motor Company (F 3.89%) sales data, and you'll instantly understand how large a chunk the F-Series represents for Detroit's second-largest automaker. Its importance goes beyond sales data as it's been critical to build the Ford Tough brand image, and its rivalry with General Motors' Silverado and Sierra is one that goes beyond the auto industry and is one of the greatest in business.

All of that said, the F-Series is probably still more important to Ford investors than many realize. Here are a few things to consider.

On one hand, as the U.S. new-vehicle market plateaus, the sentiment for automakers has reached a cyclical low. On the other hand, the most profitable part of Ford's portfolio, the F-Series, is on record pace and has recorded 14 consecutive months of sales gains. Through June, sales of the F-Series were 4.1% higher than the first half of 2004, the full-size truck's record year with an impressive 939,511 pickups sold.

To try to put into context just how many F-Series Ford sells in comparison to the remainder of its portfolio, consider that Ford sold more F-Series trucks through the first half of 2018 than its entire SUV portfolio combined. The F-Series alone outsold Ford's entire car segment by nearly 200,000 units through June, making its decision to back off car production more sensible. More than one out of every three Ford-branded vehicle sold through June was an F-Series truck. And at 451,138 units sold through June, the F-Series has outsold the Silverado and Sierra combined by nearly 60,000 units. 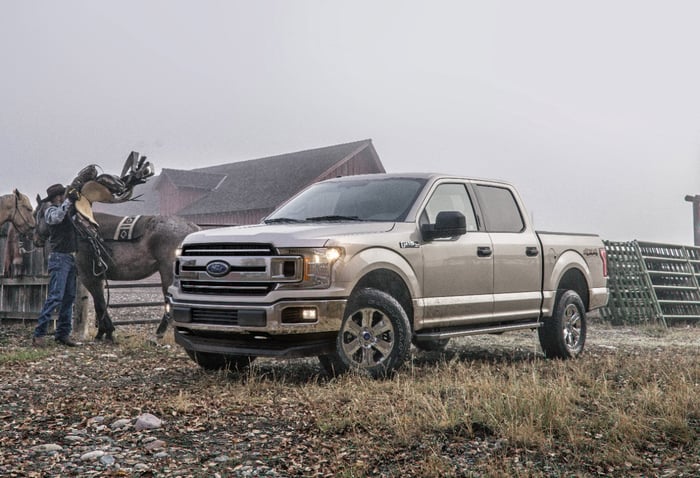 That puts in perspective how massive -- on paper -- the F-Series is for Ford compared to its other vehicle segments as well as competing products, but how much value is the F-Series really generating?

Many understand that Lincoln has fallen a long way from its heyday, and year to date, sales are down 10.8% compared to the prior year. Sales of luxury vehicles pale in volume to mainstream brands, but the profit they generate is substantially higher -- it's becoming increasingly important for automakers to have a successful global luxury brand. But because of Lincoln's struggles, it's even more important that the F-Series thrives, as the full-size truck is basically a luxury vehicle with its high price tags and margins. In fact, according to Ford, the F-Series average transaction prices in June reached $46,800, the highest of any full-size pickup manufacturer.

Make no mistake: It's not all show and no go. The F-Series hauls in the big bucks on the bottom line. In fact, Morgan Stanley analyst Adam Jonas wrote in a March 14, 2018, note to investors: "[w]e calculate the value of the F-150 franchise may be worth more than 150% of the company's enterprise value." Jonas goes on to suggest that even a 5% change in F-150 production could be worth nearly 10% to Ford's earnings. Later in the Morgan Stanley research report, the team calculated that Ford's pickup trucks could generate 105% of its current total operating profit -- much higher than General Motors' 64.7%, which is a great thing when the F-Series has phenomenal years such as 2018, but also a little concerning since it means the company's automotive profit -- remember that Ford makes a lot of money with Ford Credit, which isn't included in automotive operations -- is highly dependent on one product line.

Most investors, and consumers, realize how important Ford's F-Series is to the company's brand and marketing campaigns. Some realize how crucial the product line is to offsetting rising incentives with similarly strong rising average transaction prices, supporting margins. And considering that Ford doesn't yet have a highly successful luxury brand, the F-Series isn't just important to the company's automotive bottom line -- it's practically everything. Remember that when creating your next investing thesis.