Of all the retailers that have announced plans to fill the vacuum left by the demise of Toys R Us, there is good reason to think Party City (NYSE:PRTY) is among the ones likely to be most successful.

You might not think of the place you go to buy balloons, streamers, and plastic dishware as a winner in the highly competitive toy market. But Party City's plan to open 50 pop-up toy stores this fall is actually a sound move that could be a big opportunity for the company. 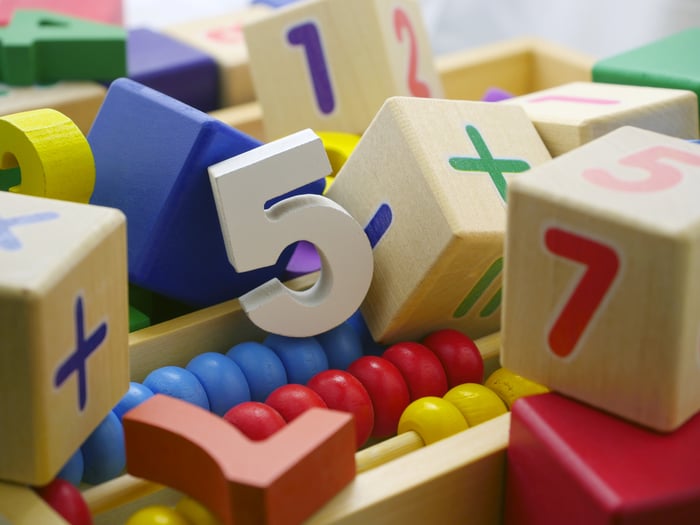 Competition is popping up everywhere

Walmart is expanding its shelf space for toys, while Amazon is printing up a new toy catalog for the holiday season. Even KB Toys and FAO Schwarz are planning comebacks. Retailers see plenty of opportunity to benefit from the void left by Toys R Us.

There are also numerous independent toy stores anticipating a boost in sales, and my fellow Motley Fool Dan Kline even suggests Barnes & Noble has a chance to capture some of the lost sales. While everyone can get a slice of the pie, Party City's pop-up stores may represent the best strategy.

Pop-up stores -- generally small, temporary shops that "pop up" in high traffic areas, creating buzz and sale -- are a hot trend in retailing. Snap used them to sell its Spectacles; Blue Apron is trying to sell meal kits this way; and Macy's is opening a pop-up version of its Backstage discount chain inside its department stores, thereby combining the store-in-store boutique trend with pop-ups.

And it's how the once-bankrupt KB Toys plans to return to the market, too. It plans to open 1,000 pop-up toy stores for Black Friday and the Christmas shopping season, and afterward, make some of them permanent brick-and-mortar locations.

Although Party City's 50-store Toy City plan seems much more modest, the specialty retailer has extensive experience in operating these temporary locations. Every year it opens hundreds of Halloween City stores all over the country, which operate for about two months, and then disappear until the next year.

This type of targeted guerrilla retailing is quite lucrative as Party City's 250 to 300 Halloween pop-up stores generate approximately 20% of its total domestic retail sales, or about $54 million. And it's not alone.

You can also find over 1,000 Spirit stores populating strip malls across the country. In 2015, privately held Spencer Spirit Holdings said that these stores generated about $400 million in sales and represented about half its profits.

While the number of stores it opens and the contribution to revenue varies depending upon which day Halloween falls (weekends, obviously, tend to make those numbers rise), Party City has a chance to score big with its Toy City stores by opening them in September, some two months earlier than KB Toys stores will debut its chain. And it plans to place them alongside its Halloween City stores, which should bring in additional customer traffic.

Party City CEO James M. Harrison says the new concept "will allow us to leverage our existing pop-up store capabilities and capitalize on the category whitespace that has recently been created."

An idea that can snowball

This pilot program for Party City has the potential to grow over time and rival the number of stores it opens each Halloween. It could even surpass the Halloween pop-ups as the holiday shopping season offers a much bigger sales opportunity.

Although consumers spent a record $9.1 billion on Halloween last year, some $656 billion is spent on Christmas. The U.S. toy market, which is the world's largest and sees the greatest amount of sales around the holidays, is a $26 billion industry. That's a big enough toy box to support a number of players, including those not typically dabbling in the category.

Party City may not become the world's biggest toy store, but look where that title got Toys R Us. Instead, Party City can use its existing expertise to grow its top and bottom lines. And investors may find that a much more meaningful and important achievement.