The z14 is outselling its predecessor and driving IBM's revenue higher.

Strong sales of mainframe systems have helped International Business Machines (IBM 0.59%) report three consecutive quarters of revenue growth. The z14 mainframe, which began shipping in September of 2017, has triggered an upgrade cycle that has boosted IBM's revenue for the past year.

Not only is IBM's top line getting a boost, but that boost is bigger than in years past. "We are well in advance of what the prior cycle was," explained CFO James Kavanaugh during the company's latest earnings call.

IBM typically launches a new mainframe system every two and a half years, give or take. An upgrade cycle then ensues, in which some existing mainframe customers replace their aging systems with the latest model. This leads to multiple quarters of strong mainframe sales growth, following by declines as the launch is lapped.

This time around, the z14 has produced stronger sales growth than the z13 before it. Mainframe sales more than doubled in IBM's second quarter, for example, the fourth quarter of z14 availability. Based on year-over-year numbers, this cycle looks like the best one in over a decade: 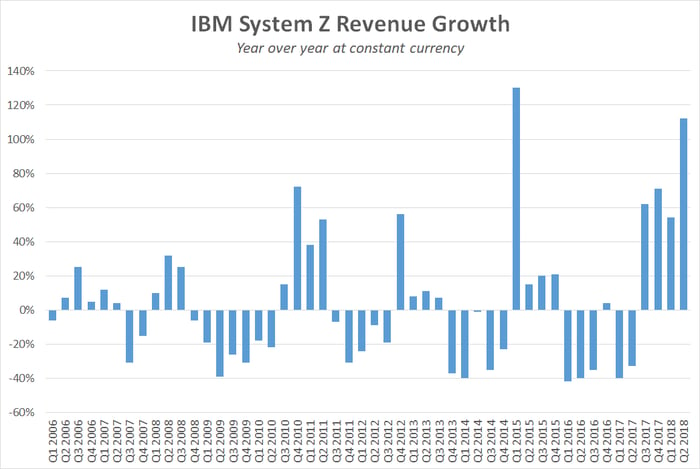 The z14 represents a significant upgrade over the z13. The system is capable of processing five times as many transactions per day as its predecessor, sports triple the memory, and boasts input-output performance three times that of the z13. And a fourfold increase in silicon dedicated to cryptographic algorithms allows the system to encrypt all data without negatively affecting performance.

Systemwide encryption is a key feature in a world where cybersecurity is only becoming more important. IBM's security business, which includes a portion of mainframe sales, is one of its "strategic imperatives" that will drive growth for years to come. Security revenue jumped 79% in the second quarter, reaching $1 billion.

One other reason for strong mainframe growth: IBM is winning what it calls "emerging workloads." Those include areas like blockchain and machine learning. Around 60% of MIPS (million instructions per second, a measure of processing power) shipped went toward these specialty workloads, and total MIPS shipped tripled in the second quarter.

On top of selling systems to existing customers, IBM is adding some new mainframe customers as well. Kavanaugh pointed to a U.S. managed-care provider, a Canadian university, an Italian electronics distributor, and an African bank as examples of new customers embracing the platform. A cloud-ready version of the z14 launched earlier this year, designed to fit into a standard data center, could help IBM win even more new business.

Despite the strong cycle, mainframe sales are almost guaranteed to decline in the second half of the year. This will create a revenue headwind for IBM, so the company will need to find revenue growth elsewhere to offset slumping hardware sales.

Kavanaugh expects the services business to pick up some of the slack: "We know in the fourth quarter that we've got a tremendous compare, and I talked about that 90 days ago. We will have an impact, but we've got momentum in our services businesses returning the growth and, as you know, that's 60% of our business overall."

Kavanaugh also pointed out that the mainframe cycle was not the only thing driving growth in the second quarter:

If you extract out the mainframe cycle, we still had over 60 countries that actually grew. Those are large countries like Japan; like [the] U.K.; like Germany, France, Spain, Australia -- many which are not mainframe-dominant. So, we see continued momentum.

Will this growth outside the mainframe business be enough to propel IBM to growth in the back half of the year? It remains to be seen. IBM stock trades not far off from its 52-week low, so the market isn't exactly pricing in high expectations. Given the mainframe headwind, even a so-so third quarter may be enough to convince investors that IBM's return to growth is here to stay.