Major market benchmarks traded mostly higher on Tuesday thanks to a rising chorus of solid earnings reports hitting the wires.

But investors didn't sing the praises of every stock today. Read on to learn why Whirlpool (NYSE:WHR), Astec Industries (NASDAQ:ASTE), and JetBlue Airways (NASDAQ:JBLU) each tumbled. 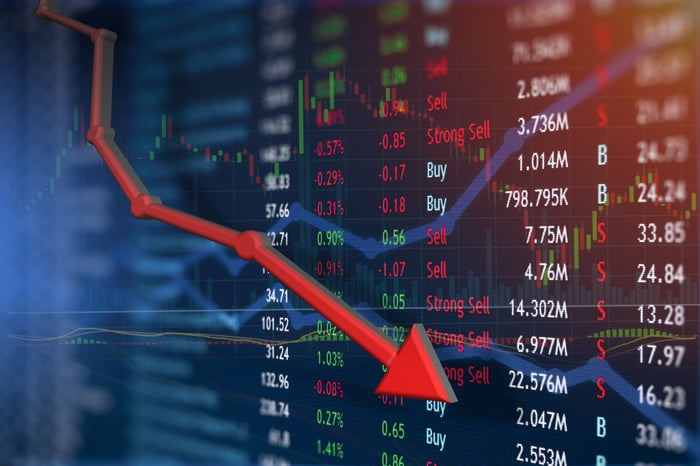 Shares of Whirlpool fell 14.5% after the home appliance leader followed a tough quarter with disappointing guidance.

Whirlpool's quarterly revenue declined 4.5% in constant currency to $5.14 billion, which translated to a GAAP net loss of $657 million, or $9.50 per share. But Whirlpool's loss was driven by $860 million in asset-impairment charges related to weak sales in the Europe, Middle East, and Africa (EMEA) region and a preliminary antitrust settlement with the French Competition Authority. On an adjusted basis, Whilrpool's net income was $3.20 per share, down from $3.35 in the same year-ago period.

"We are pleased to deliver margin expansion in a very challenging cost environment, driven by strong North America margins and significant global price/mix improvement during the second quarter," added CEO Marc Bitzer. "Despite these positives, our performance in EMEA was below expectations."

Astec Industries stock plummeted 20.7% in the wake of the infrastructure, mining, and energy industry equipment manufacturer's announcement of quarterly results and a strategic exit from its obligations related to a partnership with wood pellet plant customer Highland.

Astec's net sales declined 9.7% year over year to $272.5 million, translating to a net loss of $40.7 million, or $1.76 per share. At the same time, these results were largely driven by the Highland development. In particular, Astec says that due to "unresolved issues which inhibited the plant's ability to meet contractual provisions" under a sales contract with Highland, they "decided in it was in both parties' best interest" for Astec to restructure and exit its obligations regarding the plant. In exchange, Astec agreed to pay $68 million in cash over the next 120 days and forgive roughly $7 million in receivables.

Excluding the effect of the contractual exit, Astec's sales would have climbed 16.5% to $347 million, and its earnings would have risen to $24 million, or $1.03 per share.

Finally, shares of JetBlue Airways plunged 10.2% after the low-cost airline announced second-quarter sales that climbed 5% year over year to $1.928 billion -- slightly below expectations -- and a net loss of $120 million, or $0.38 per share. To be fair, that loss was driven by a $319 million pre-tax impairment charge related to the planned 2020 phaseout of its Embraer E190 fleet. Excluding the unusual item, JetBlue's adjusted earnings came to $0.38 per share -- above estimates for $0.36 per share, but down from $0.62 a year ago as average fuel prices skyrocketed 40% year over year to $2.28 per gallon.

Looking forward, JetBlue also told investors it now plans to increase capacity by between 6.5% and 7.5% for the full year of 2018, tempering the high end of its previous target for an increase of between 6.5% and 8.5%.