Synchrony Financial (NYSE:SYF), which issues a variety of store-branded credit card products, suddenly plunged on Thursday afternoon. As of 3 p.m. EDT, the stock was down nearly 12%.

Since we're in the middle of earnings season, you may be thinking that Synchrony's earnings report might have something to do with the plunge, but you'd be wrong. In fact, the bank is scheduled to report its earnings tomorrow.

Synchrony is dropping because of one specific bad news item that came to light. According to reports, Walmart (NYSE:WMT) has chosen Capital One (NYSE:COF) as the new issuer of its store-branded credit card products. 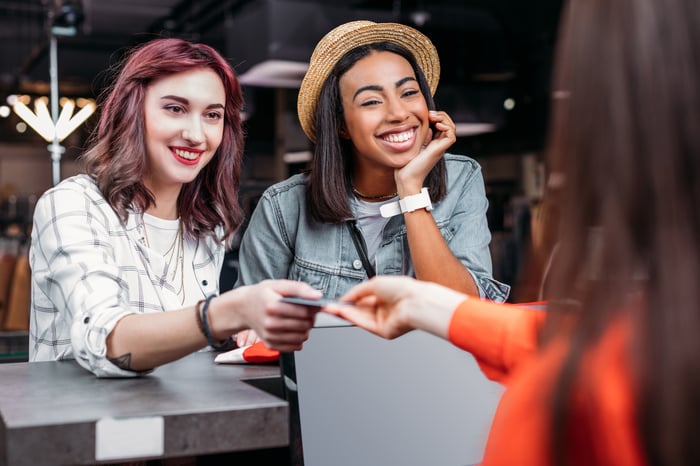 To be perfectly clear, this is a big deal for Synchrony. Of the bank's roughly $53 billion in retail card loan receivables at the end of the first quarter, Walmart card balances made up about $10 billion, according to today's reports. Synchrony has been the issuer of Walmart's credit card products for almost two decades, so this marks the end to a pretty big and long-lasting partnership.

Here are some key points for investors to know:

It's not yet clear what will happen with the $10 billion or so in outstanding Walmart card balances Synchrony already has. Today's announcement only affects future credit cards issued.

The new partnership includes both store cards that can only be used in Walmart, as well as co-branded (Visa, Mastercard, etc.) cards that can be used anywhere.

On one hand, losing its partnership with Walmart is a serious snag for Synchrony. After all, Walmart is the biggest retailer in the U.S. in terms of sales volume. In fact, the Wall Street Journal article that reported the news said that this is the "biggest shake-up in retail credit card partnerships since Costco Wholesale Corp. dumped American Express Co. and moved to Citigroup Inc. in 2016." And I agree.

On the other hand, this is still just one of many partnerships in Synchrony's portfolio. As American Express has proven in the couple of years following the dissolution of its Costco partnership, the loss of one massive partnership can be overcome. So, while this is definitely a big bump in the road, it's not necessarily a reason to go running for the exits unless other retailers begin to follow suit.