Shares of Advanced Micro Devices (NASDAQ:AMD) rose on Thursday after the chip company reported better-than-expected second-quarter results. Despite a headwind posed by weakening demand for GPUs from cryptocurrency miners, strong growth from its Ryzen PC CPUs and EPYC server CPUs pushed up the top and bottom lines. The stock was up 14.3% at market close.

AMD reported second-quarter revenue of $1.76 billion, up 53% year over year and $40 million above the average analyst estimate. The computing and graphics segment, which includes PC CPUs and GPUs, produced $1.09 billion of revenue, up 64% year over year. Revenue declined compared to the first quarter thanks to lower GPU revenue. 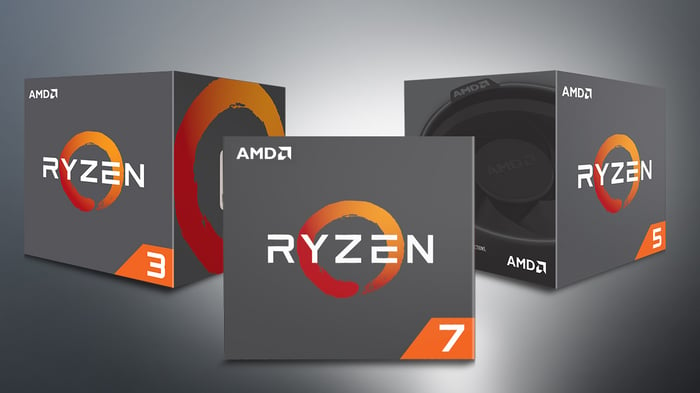 The enterprise, embedded, and semi-custom segment, which includes chips for the major game consoles and server CPUs, produced $670 million of revenue, up 37% year over year. This growth was driven by higher semi-custom and server chip revenue.

Non-GAAP earnings per share came in at $0.14, up from a loss of $0.01 in the prior-year period and $0.01 higher than analysts were expecting. Gross margin jumped 3 percentage points year over year, to 37%, on the strength of AMD's newer products.

"Most importantly, we believe our long-term technology bets position us very well for the future. We are confident that with the continued execution of our product roadmaps, we are on an excellent trajectory to drive market share gains and profitable growth," said AMD CEO Dr. Lisa Su.

AMD expects revenue growth to slow way down in the third quarter. The company's guidance calls for revenue of $1.7 billion, plus or minus $50 million, up just 7% year over year and down about 3% compared to the second quarter. Sales growth for Ryzen and EPYC will be partially cancelled out by continued slumping sales of GPUs tied to cryptocurrency mining.

After Thursday's rally, shares of AMD now trade for about 40 times the average analyst estimate for non-GAAP 2018 earnings. Earnings can grow faster than revenue as high-end products make up an increasing percentage of AMD's revenue, but the company will have to contend with weak demand for its GPUs.