It should be no surprise by now that fewer people will watch traditional pay-TV in the United States this year compared to last year. Viewership is expected to decline 3.8% this year, according to eMarketer, an acceleration from the 3.4% decline last year.

The number of cord-cutters is expected to reach 33 million by the end of the year, as people adopt multiple on-demand streaming video subscriptions as a substitute for the big cable bundle. Companies like Netflix (NASDAQ:NFLX), Amazon, Hulu, and HBO -- now a subsidiary of AT&T (NYSE:T) -- offer enough entertainment for most. And as streaming options continue to expand, the prospects don't look great for traditional distributors like Comcast (NASDAQ:CMCSA) and Charter Communications (NASDAQ:CHTR). 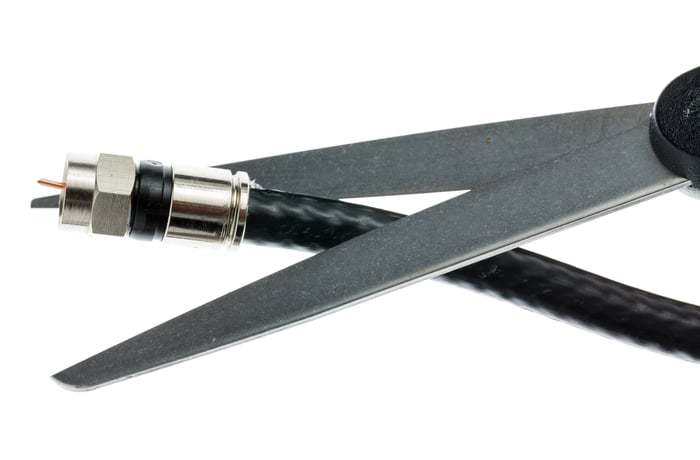 Where are all the cord-cutters going?

Streaming video is the primary force driving subscribers away from traditional pay-TV.

More and more customers are signing up for subscription video on-demand services such as Netflix, Amazon Prime Video, Hulu, and HBO Now. They're also able to stream video entertainment on demand from ad-supported services like YouTube, The Roku Channel, Crackle, and more. Content aggregators like Roku devices and Apple TVs make it easy for consumers to discover and watch content that doesn't require a cable subscription.

A more recent development has been the rise of streaming video services that act as a more direct replacement for traditional cable or satellite service. AT&T has quickly jumped into the lead with its DirecTV Now service. These services often cost less per month than traditional pay-TV, don't require additional fees for installation and equipment rentals, and generally have more transparent pricing.

Comcast has worked with Netflix and YouTube to integrate both streaming services into its X1 set-top-box platform. Comcast began enabling customers to sign up for Netflix through the platform a couple of years ago, and it recently started offering customers a bundle of networks that includes Netflix.

Charter has similar mechanisms to integrate with Netflix and other streaming services, but eMarketer analyst Christopher Bendtsen says he doesn't see these partnerships as having a meaningful impact on subscriber churn away from pay-TV. That's despite the fact that about one in five pay-TV households pays for a streaming video service through its cable provider.

It's only going to get worse for traditional pay-TV

By 2022 there are expected to be 55 million cord-cutters in the U.S., comprising over 20% of all adults, according to eMarketer's forecast. Analysts anticipate satellite and telecom companies such as AT&T will lose more subscribers than cable companies like Comcast and Charter. Comcast and Charter are better positioned to offer high-speed internet through their existing architecture, which has proven a key factor in retaining video customers.

Netflix has been a prime beneficiary of the trend over the past few years, but as more big companies with big budgets enter the market, it's not clear it will be able to add new customers at the same rate that it has in the past.

People generally cut the cord to save money, but bundling four or five different streaming services could end up costing more than a traditional pay-TV bundle. Netflix is still well positioned to win the business of most cord-cutters, but it might not be a no-brainer for everyone as a number of excellent options enter the market over the next few years.

As cord-cutting accelerates, it doesn't necessarily mean well-established streaming services like Netflix will be the biggest beneficiaries. Most pay-TV subscribers already subscribe to Netflix. I believe there are other ways for investors to capitalize on the trend of cord-cutting to a much greater degree.