As more people cut the cord, television advertising dollars have to go somewhere.

I previously argued the best way to invest in cord-cutting is to buy shares of Facebook (META -0.79%) or Google parent company Alphabet (GOOG -0.30%) (GOOGL -0.31%). But Roku (ROKU -0.31%) has since become a publicly traded company, and it makes a great case for being a way to invest in the trend. 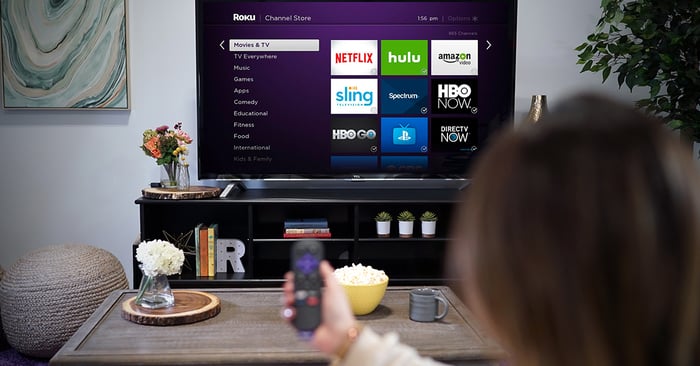 The real opportunity in cord-cutting

While not the only factor, price remains one of the biggest reasons consumers ditch cable. If consumers are looking to save money, however, replacements like Netflix will have a rough cap on what they can charge per month (although it doesn't look like Netflix is close to it yet).

That's why I recommended Facebook and Alphabet to take advantage of the shift in ad dollars from TV to digital -- Google and Facebook combined took nearly all the growth in digital advertising over the last couple years. But Roku may present an even better alternative.

Roku is not a hardware company

Roku follows the razor-and-blade approach when it comes to hardware: it uses its devices to establish a platform to sell content and advertising.

And that platform is growing rapidly. Roku's active accounts increased 48% year over year in the third quarter, reaching 16.7 million. While that's still tiny compared to Facebook or Google's audience, it's getting closer to the top pay-TV providers and top rated television programming.

What's more, those users are increasingly engaged on the Roku platform. Streaming hours grew 58% year over year to 3.8 billion. Roku says its players captured half of all streaming hours among the top four streaming devices.

With a highly engaged audience of consumers seeking cable-free video entertainment, Roku's platform presents a big opportunity for marketers to access "a valuable and difficult-to-reach audience." And Roku is aggressively pursuing traditional TV advertising budgets as well: it's closed agreements with three of the top six ad agencies to buy advertising upfront. Two of those deals just came in the last quarter. Overall, ad revenue more than doubled year-to-date.

Is Roku really a better buy than Facebook or Google?

While Roku has certainly carved out a niche in digital advertising that's poised to grow quickly, Google and Facebook maintain a practical duopoly over the wider market.

What's more, Roku's high margin platform segment (which contains its advertising business) is the fastest growing portion of the business. In fact, Roku may be the fastest growing publicly traded digital advertising business on the market. Even with hardware sales dragging down overall revenue growth, Roku's sales still outpaced Alphabet's by a wide margin, but lagged Facebook's growth.

What Roku doesn't have that Facebook and Alphabet both offer is profits. Roku is still posting losses quarter after quarter, losing $0.10 per share last quarter. Comparing Roku on a profitability basis is impossible at the moment. Roku also doesn't have as wide of a moat as Facebook or Google, but its partnerships with manufacturers and content creators are helping to establish one.

Overall, Roku might be riskier than Facebook or Google, but it presents an interesting opportunity to invest in the growing cord-cutting trend.