Alibaba (NYSE:BABA) took control of food delivery company Ele.me in May and is already launching a $3 billion campaign on its behalf this summer. Ele.me is currently considered the market leader in China thanks to its 3 million strong delivery force registered through its platform.

But based on the expensive summer promotion, Alibaba seems keen to guard its new acquisition's lead position against its top competitor -- Tencent-backed Meituan Dianping. That's because the prize for winning the market is sizable considering China's food delivery market reached $10.7 billion in the 2017 fourth quarter, up 16.2% from the previous sequential quarter, according to Chinese analytics and data provider Analysys. With that kind of money on the line, Alibaba isn't holding back on its plans for Ele.me. 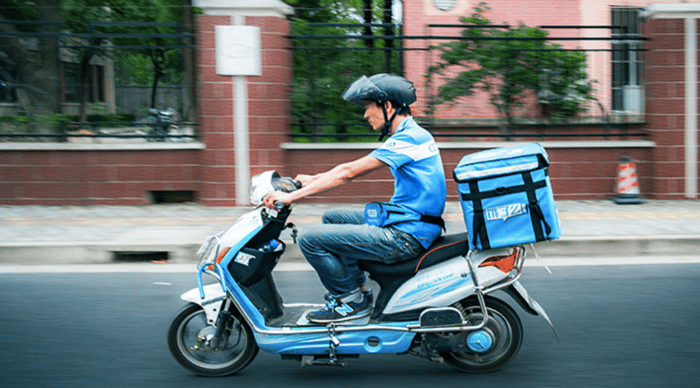 Alibaba is using Ele.me to dive into the food delivery market in China. Image source: Ele.me.

Alibaba said the $3 billion will be split up by $1 billion each month from July to September. The ultimate goal of this summer campaign is to help the service reach over 50% market share in China, Ele.me CEO Lei Wang told Reuters.

As part of the summer promotion, customers were able to use discounts and coupons to order late-night food deliveries during the FIFA World Cup tournament. The sports event led to a spike in deliveries that has been maintained even after the tournament ended on July 15, Ele.me said. In fact, the company claims it added 100,000 customers in the Chinese city of Hangzhou to its membership program in early July.

The new subsidiary also has benefited from the consumer data that Alibaba can pull from its many apps including Taobao, Tmall, Alipay, and Youku, which tell it more about what people want. And these platforms also are driving traffic to Ele.me through ads and promotions, which helped certain delivery categories climb 110% year over year.

Alibaba has a right to be worried about Tencent-backed Meituan Dianping as it's preparing to go public on Hong Kong's stock exchange later this year at a valuation of $60 billion. However, Meituan Dianping reported a $2.8 billion loss for 2017, proving that it also has been forced to spend heavily in order to win customers.

The most obvious use Alibaba has for its new unit is as an easy way to break into the multibillion-dollar food delivery market in China. However, it also has two ulterior motives.

First, management thinks that Ele.me has a long runway because only 10% of the $585 billion Chinese food market went to food delivery in 2017, according to the China Cuisine Association. With the data gleaned from its many apps, including Ele.me, Alibaba can figure out how to make the delivery experience better for people so that they opt for it more and more. This will allow them to take a bigger bite of this burgeoning industry.

Second, Ele.me's Feng Niao Delivery network has 3 million employees who can help make deliveries for Koubei, Alibaba's local-services platform. This could significantly bolster the parent company's last-mile delivery network range and penetration. Alibaba said it sees the local-services market as a crucial area to win over because it helps with overall consumer and merchant engagement for all of its platforms.

This strategy is a clear win for Alibaba because it can use the huge fleet of motorbikes for countless delivery options. Even Alibaba's Hema grocery stores could benefit from faster deliveries to more people. Hema has said that its goal is to deliver groceries in under 30 minutes to as many people as possible in China.

This all goes back to Alibaba's overarching "New Retail" strategy that's been a big focus for the company this past year. Alibaba is trying to blur the lines between offline and online shopping to create a smoother and more enjoyable shopping experience. The company believes customers should be able to visit a physical grocery store during their lunch hour and use their app to order home delivery. Better yet, the customer should be able to schedule the service for three hours later after the work day ends.

Sometimes you'll see a big company scoop up another smaller enterprise mainly to acquire talent. In this case, Alibaba's primary goal is clearly to build a stronger delivery and logistics network. In fact, Alibaba recently pledged to spend $15 billion on its own global logistical capabilities over the next five years to help it reach its ultimate goal of offering 24-hour delivery across China. And Ele.me is just another step forward in that process.