Wednesday was a bad day for American automakers. General Motors (NYSE:GM), Ford Motor (NYSE:F), and Fiat Chrysler reduced their full-year earnings forecasts by a combined total of around $3 billion.

All three automakers pointed to rising commodity costs as a key profit headwind, along with poor market conditions in some parts of the world. These guidance updates confirmed investors' worst fears. As a result, shares of the major U.S. automakers plunged. General Motors stock has now fallen about 9% over the past month, while Ford shares are down 14%. 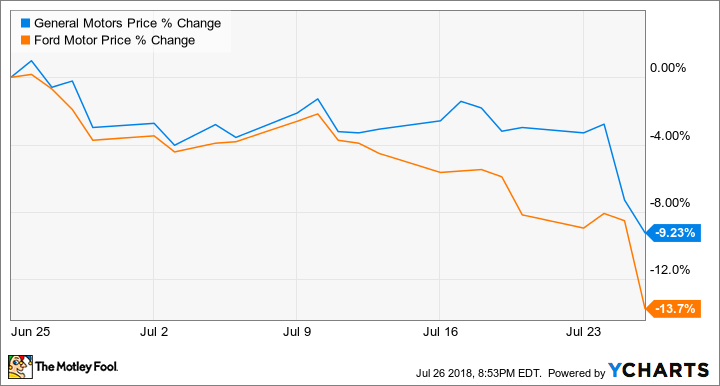 However, the earnings headwinds affecting the two largest U.S. automakers are likely to abate over the next year or two. Furthermore, both companies are planning new-product offensives that should drive substantial improvements in their profitability by 2020.

General Motors posted solid results last quarter, with adjusted earnings per share of $1.81. That beat the average analyst estimate of $1.78 but was down slightly from $1.89 in the year-ago period. That said, GM's operating profit in the key North America region declined to $2.7 billion from $3.5 billion a year earlier.

Of more concern to investors, the General said that it expects to face a roughly $1 billion profit headwind this year from higher commodity costs and currency fluctuations. U.S. tariffs on steel and aluminum imports have driven most of the increase in commodity costs. GM now expects full-year adjusted EPS of $5.80-$6.20, down from around $6.50 previously.

Across town, Ford's earnings report was even more dismal. Operating profit plunged by half to $1.2 billion. The year-over-year decline was driven mainly by company-specific factors. The Blue Oval saw a negative impact of more than $500 million in North America last quarter from a fire at a supplier facility, while sales and profit plunged in China because of product missteps. Still, given the strength of demand for Ford's F-Series pickups, profitability would have been much stronger in the absence of higher commodity costs. Looking ahead, Ford cut its full-year EPS forecast by more than 10%, with the midpoint of its guidance range falling from $1.58 to $1.40. It also warned that it could take up to $11 billion of earnings charges over the next three to five years as it works to restructure its business, which could include exiting markets that have no realistic path toward earning their cost of capital.

While the near-term outlook is somewhat grim for both automakers, Ford stock now trades for just seven times its 2018 EPS forecast. GM stock is even cheaper at six times earnings. This level suggests that investors expect the pain to become even worse over time.

However, the tariff-related commodity cost headwind probably won't hurt profitability much in the long run. For one thing, there's a good chance that the tariffs will eventually be removed. The U.S. and EU seem to be making progress toward resolving their trade disputes. If major steel-exporting countries come to the table -- or the U.S. gives up on its tariff strategy -- the steel and aluminum tariffs could go away, bringing prices back down.

Furthermore, while automakers have to absorb most of the headwind from commodity prices in the short run, they can adjust over time -- mainly by raising prices. At an industry level, this situation would probably lead to lower sales. Fortunately, GM, Ford, and many of their peers have ample flexibility to reduce production while remaining highly profitable.

Another, potentially even more significant, reason for optimism is that GM and Ford are poised to dramatically improve the competitiveness of their product portfolios.

In the key North America region, GM will roll out all-new versions of its Chevy Silverado and GMC Sierra light-duty trucks starting next month. The heavy-duty models will be updated next year. This development will improve GM's pricing power relative to the outgoing models, driving a substantial improvement in profitability. The General will also fill a key product gap in its crossover/SUV portfolio early next year with the new Chevy Blazer.

Ford arguably has even more upside in North America. It has already stopped producing the money-losing Focus sedan, and it will phase out its other traditional car models over the next few years. Meanwhile, it will update and expand its aging crossover/SUV lineup. It will also rejoin the midsize pickup segment with a new Ford Ranger model. The net result should be replacing hundreds of thousands of unprofitable sales each year with a similar number of profitable sales.

Of course, the new product offensives won't be limited to North America. GM's new emerging-markets vehicle platform will be ready next year, allowing the company to profitably produce a variety of low-cost models over time. Ford and GM also both plan to introduce new models in China at a rapid pace in the coming years.

The arrival of these new products should have a meaningful positive impact on profitability for both automakers, independent of commodity prices. Investors in General Motors and Ford may face a bumpy ride, but there's no reason to worry about their long-term prospects.