Yes, Celgene (NASDAQ:CELG) is probably the riskiest big biotech on the planet. The company depends on one drug -- Revlimid -- for 64% of its revenue. It relies on three drugs for nearly 88% of its total revenue, more than any other major drugmaker. Market research firm EvaluatePharma ranked Celgene's pipeline risk, which it calculates by estimating cumulative sales from pipeline products between 2018 and 2024 as a percentage of total revenue, as the highest in the industry.

But after Celgene's second-quarter update on Thursday morning, the biotech appears to be less risky than it's been. Here are three reasons why I think that's the case. 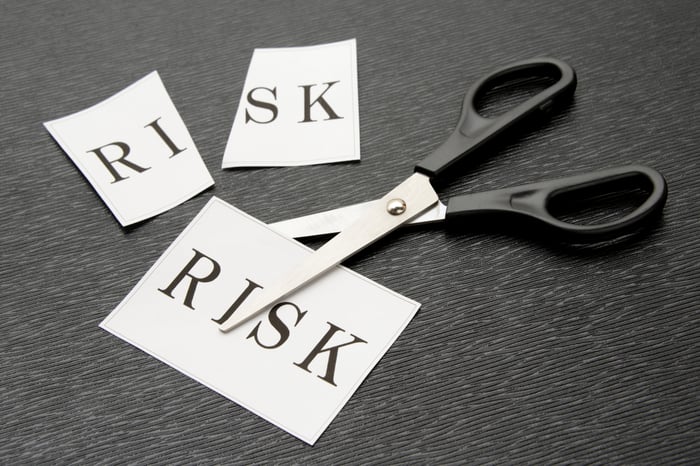 First of all, Celgene reported great Q2 results, beating Wall Street estimates on both the top and bottom lines. Revenue jumped 17% year over year. Adjusted diluted earnings per share (EPS) increased 16% from the prior-year period, even with dilution from the Juno Therapeutics acquisition factored in.

Thanks to the tremendous performance in the second quarter, Celgene boosted its full-year 2018 outlook. The company now expects 2018 revenue of around $15 billion, up $200 million from its previous guidance. Adjusted diluted EPS is now expected to be between $8.70 and $8.75. Celgene previously estimated full-year EPS of $8.45.

Pessimists might point out that the improved full-year projection stems from greater expectations for Revlimid. Doesn't becoming more dependent on the drug increase Celgene's risk rather than reduce it? Only if the company loses exclusivity for Revlimid sooner than expected or doesn't have new sources of growth before it does lose exclusivity for the drug.

I don't think the former scenario will happen. And we'll address why Celgene should have new growth drivers in the next point. In the meantime, a positive adjustment to full-year projections should remind investors just how successful Celgene still is.

Celgene CEO Mark Alles started off the Q2 conference call reminding everyone that the company announced positive results from three late-stage clinical studies in just the last four weeks. How many other biotechs can make that claim?

Two of the studies to which Alles referred featured luspatercept. The drug performed well in phase 3 studies targeting the treatment of rare blood disorders myelodysplastic syndromes (MDS) and beta-thalassemia. Earlier in the week, Celgene announced positive results from a phase 3 study of Revlimid in combination with Rituximab, which the biotech's team refers to as "R2", in treating relapsed or refractory indolent lymphoma.

Celgene plans to file for approval of luspatercept in the first half of 2019. The drug could generate peak annual sales of at least $2 billion if approved for both MDS and beta-thalassemia. Celgene expects to prepare global regulatory submissions of the R2 combo in the first quarter of 2019.

These successes highlight what a great pipeline Celgene has. The company plans to file for FDA approval of fedratinib in treating myelofibrosis by the end of 2018 and for FDA and European approvals of ozanimod in treating multiple sclerosis in 2019 Q1. Celgene also hopes to file for approval of CAR-T therapy liso-cel next year. All of these drugs are potential blockbusters. It's no wonder that EvaluatePharma ranked Celgene's pipeline No. 3 in the biopharmaceutical industry.

3. Increased clarity in its immunology strategy

One surprise revealed in Celgene's Q2 conference call was that the company is "reconsidering" its phase 3 program for Otezla in ulcerative colitis. Why? Celgene thinks that ozanimod is the better horse to ride for targeting inflammatory bowel disease indications.

In my view, increasing the clarity of its immunology strategy is a plus for Celgene. It definitely demonstrates the confidence the company has in ozanimod. Celgene is evaluating the drug in late-stage studies for treating Crohn's disease and ulcerative colitis.

But the move doesn't reflect poorly on the prospects for Otezla. The drug is still on track to generate revenue of $1.5 billion this year. Celgene expects to see tremendous progress for Oztela, with results on the way for a phase 3 study targeting scalp psoriasis, regulatory filings in the U.S. and Japan for Behcet's disease, a potential FDA approval for a once-daily formulation of the drug, and the start-up of a clinical trial targeting mild-to-moderate plaque psoriasis.

Don't expect Celgene's third-quarter earnings to be a lot better than its Q2 result. That might seem like bad news, but it isn't.

The company anticipates higher research and development costs in Q3 will hold back earnings growth. However, the reason for these higher costs is that Celgene thinks it will shell out around $90 million in milestone payments and will spend more on late-stage studies and regulatory submissions. Those are great "problems" to have -- and they underscore a key reason Celgene is becoming less risky and more attractive for investors with a long-term view.