PayPal Holdings (NASDAQ:PYPL) continued to impress across a range of vital metrics upon release of its second-quarter 2018 earnings report on July 25. The payments processing giant also displayed the strength of its operational cash flow and growing balance sheet resources over the last three months. We'll dive into the quarter's details after reviewing headline numbers directly below. 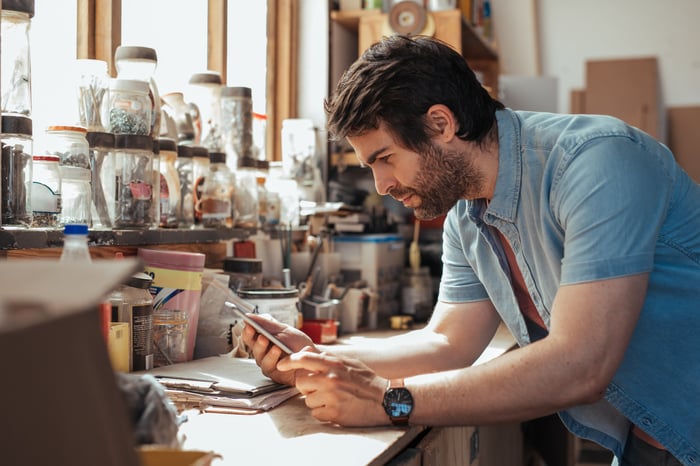 Earlier this year, I explained the advantages of the credit receivables deal that would accrue to both PayPal and Synchrony. PayPal's benefits include the freeing up of capital from a non-core business (lending to customers), which carries a lower margin than the company's transaction processing revenue streams. Just as significantly, the disposition places a cool $7 billion of sale proceeds into PayPal's coffers.

This bounty only adds to the fruits of PayPal's cash prowess. PayPal's consistent double-digit top-line improvement is creating margin expansion, which is resulting in extremely healthy cash flow. After adjusting for an accounting classification of receivables related to the Synchrony transaction, free cash flow in the second quarter hit $737 million. As CFO John Rainey pointed out during the company's earnings conference call, this equated to $0.19 of free cash flow tied to every dollar of revenue.

It became apparent this quarter that PayPal has started to deploy its cash resources in earnest; it announced four new acquisitions during the period. The company purchased Swedish mobile point-of-sale device specialist iZettle for $2.2 billion in a transaction that will close in the third quarter.

PayPal also announced the acquisition of Hyperwallet, a business-to-business e-commerce payout platform, for $400 million in cash in a deal that should settle in the fourth quarter. The company closed the purchase of risk management and fraud detection provider Simility for $120 million in cash in July. Finally, PayPal picked up Jetlore, an AI-powered predictive platform used by retailers, for $16 million in cash in May.

The company's capital allocation strategy going forward anticipates many more bolt-on acquisitions in the interest of maintaining double-digit revenue and earnings growth. Management expects to utilize the Synchrony transaction proceeds and PayPal's vigorous cash flow to fund $1 billion to $3 billion in strategic acquisitions annually over the next four years.

PayPal also aims to reward its investors and has outlined returning 40% to 50% of annual free cash flow to shareholders in the form of share repurchases. Based on the last four trailing quarters, this amount at the midpoint should equal roughly $1.5 billion per year. Alongside second-quarter earnings, PayPal announced a new $10 billion share repurchase authorization to cover these buybacks.

PayPal also increased its guidance for the full 2018 year. Management now expects revenue growth of 17% to 19%, translating to a top line of between $15.3 billion and $15.5 billion. This compares to a previous band of 16% to 18% growth, or $15.2 billion to $15.4 billion in revenue. Full-year diluted EPS, adjusted for recent acquisitions, is now slated to fall between $2.32 and $2.35, versus a previous adjusted EPS estimate of $2.31 to $2.34. Considering PayPal's recent performance, it's entirely possible the EPS target may be nudged up another few cents next quarter.