American Tower (NYSE:AMT) continued benefiting from the rapid rise of mobile data usage around the world in the second quarter. Wireless carriers in most countries where it operates kept locking up more space on its towers, which drove a healthy increase in revenue and even stronger cash flow growth. With mobile data usage expected to continue climbing, this trend should keep driving strong growth for the communications tower company in the coming years. 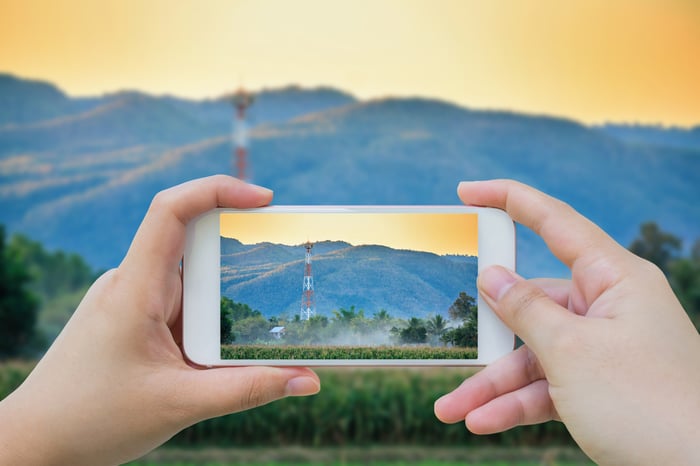 Solid organic growth in almost every market but India drove the quarter's results.

The rapid adoption of unlimited data plans in the U.S. wireless market has elevated aggregate year-over-year mobile data usage growth to roughly 40%. This is in turn fueling record levels of U.S. commenced new business for American Tower, resulting in Organic Tenant Billings Growth of 7.4% in the second quarter. Furthermore, given this robust data growth, deployment of new spectrum and the introduction of advanced technology across our U.S. tenant base, we are increasing our full year 2018 expectations for U.S. Organic Tenant Billings Growth to approximately 7%. We also anticipate a multiyear period of elevated demand in the U.S. as our tenants invest in 4G capacity and quality while launching mobile 5G networks, enhanced Internet of Things services and other initiatives that we expect will sustain demand for our comprehensive telecommunications real estate portfolio.

As Taiclet pointed out, American Tower is benefiting from increased data usage by mobile customers in the U.S., as that's driving wireless carriers to secure more space on its towers. The company doesn't see this trend ending soon because carriers are investing to expand their networks to serve existing customers.

Latin America has also been a source of strength, as it posted double-digit organic tenant billings growth in the second quarter due to healthy demand for tower space in Brazil and Mexico. The only issue right now is India. However, the company "fully expect[s] the reordered India mobile industry to invest significantly to bring 4G to its subscriber base once the carrier mergers that are underway are completed."

While Taiclet noted that the "the carrier consolidation process is progressing as we anticipated" in India, it's having an unfavorable impact on the company's outlook. Due to that, and some changes in foreign exchange rates, American Tower is making a couple of slight adjustments to its full-year guidance:

Overall, while the company does anticipate slower revenue and earnings growth, it still expects cash flow to expand by the same double-digit pace.