But there was more to the quarter than Apple's headline-generating revenue and earnings per share -- both of which handily beat consensus estimates for the quarter. Key highlights from the quarter include record services revenue, soaring growth in subscriptions, accelerating growth in Apple's wearables products, and more. 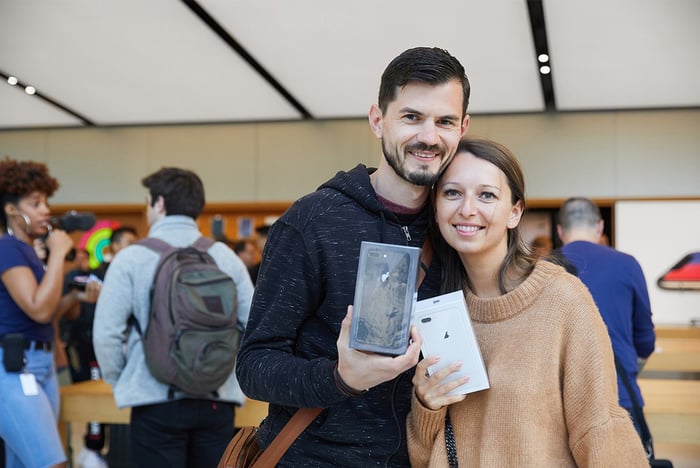 This puts total repurchases during the first half of the year to a stunning $43.5 billion.

One major boon for revenue growth during the quarter was a sharp increase in the average selling price (ASP) of iPhones. iPhone ASPs climbed to $724, up from $606 in the year-ago quarter.

This momentum has Apple management confident that it is on track to double its fiscal 2016 services revenue by 2020.

The strong year-over-year growth in native and third-party subscriptions across Apple's platforms brought total paid subscriptions to over 300 million. This figure is 30 million higher than it was at the end of Apple's Q2. Apple added that there are now nearly 30,000 apps in the App Store offering subscriptions.

Revenue from wearables, which is buried in Apple's other products segment, increased 60% year over year. Consisting of Watch, AirPods, and Beats products, this segment saw its growth rate accelerate from the 50% year-over-year growth it enjoyed in Q2.

Specifically, Apple Watch continued to see notable momentum, with revenue from the device up in the mid-40% range from the year-ago quarter. And AirPod sales "have really gone through the roof," Apple CEO Cook noted during the earnings call.

Overall, wearables revenue has grown to $10 billion on a trailing-12-month basis, Cook said. This is "a truly remarkable accomplishment for a set of products that has only been on the market for a few years," he added.

Combining these metrics with Apple's overall third-quarter performance, the tech giant is demonstrating how sustainable its growth story is.