If you believe in open-source cloud networking, then Arista Networks (NYSE:ANET) is the obvious choice to provide you with the tools and services to gain access to the cloud. With hundreds of companies scurrying to keep up with their competitors by taking advantage of the latest technological innovations, Arista has plenty of opportunities to win business, but it also faces competition from companies that want to defend their own proprietary solutions. Consolidation in the cloud industry has also started to increase, and smart acquisitions can open doors to further growth.

Coming into Thursday's second-quarter financial report, Arista shareholders wanted the company to keep grabbing up sales in a high-demand environment. Arista's numbers were stronger than most had expected, and the company's announced acquisition of Mojo Networks could add further to its growth trajectory in the months and years ahead. 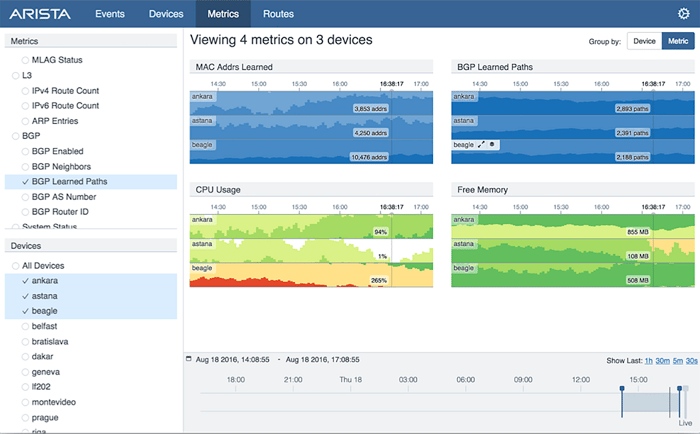 The latest from Arista

Arista Networks' second-quarter results looked soli. Revenue jumped 28% to $519.8 million, which was slightly better than the consensus forecast for a 26% growth rate. Adjusted net income was up by nearly half to $155.7 million, and that produced adjusted earnings of $1.93 per share, topping what those following the stock had expected to see by $0.23 per share.

Arista got growth from both of its key divisions. On the services side, revenue was higher by 46%, as Arista did a good job of providing clients with the expertise and assistance they need to implement product-based solutions. Yet product revenue growth was also substantial, weighing in at 26% and providing the lion's share of top-line gains for Arista.

Of equal importance was the cost discipline that Arista has embraced recently. Research and development costs were substantially higher, but declines in overhead expenses helped restrain overall operating expense growth to just 18%, and that resulted in a 3-percentage-point boost to operating margin levels.

CEO Jayshree Ullal was quite happy with how the company did. "Arista is one of the fastest networking companies to achieve a $2 billion annual revenue rate," Ullal said, "driven by its industry leadership in software-defined networking." She noted the company's record profitability for the quarter as well as her view that top-line growth is sustainable.

The next stage for Arista Networks

In addition to its quarterly results, Arista said that it would acquire Mojo Networks. Mojo is a cloud-managed wireless networking specialist, having invented what's known as Cognitive Wi-Fi. Ullal believes that the move is a milestone for Arista, representing its first acquisition and having considerable significance to the overall vision of a "cognitive campus" for the company. Arista has also won recognition for its accomplishments, with Ullal named one of the world's best growth leader CEOs.

From a product standpoint, Arista keeps releasing new features that can enhance the value of its platforms. During the quarter, Arista introduced cognitive cloud networking to unleash the true power of the Internet of Things, and its multi-function platform for cloud networking takes advantage of new switch chip technology to make systems more flexible and handle a greater array of applications.

Arista's guidance for the coming quarter was consistent with its recent growth trajectory. The networking company sees revenue of $540 million to $552 million for the period, with gross margin coming in between 63% and 65% and operating margin in a range of 32% to 34%. Those numbers would be solid compared to previous quarters, adding another expectation that Arista will maintain its ability to keep innovating.

Arista shareholders didn't seem all that impressed with the report, and the stock fell more than 1% in after-hours trading following the announcement. Yet with growth trends remaining in place, Arista's long-term prospects still look good, and efforts to maintain its leadership role in the industry and to provide an alternative to proprietary networking services look to pay off for the foreseeable future.