Starbucks (NASDAQ:SBUX) has a fairly bleak history when it comes to acquiring other companies and keeping their brands distinct from its own in stand-alone stores. Boulange bakery, Evolution Fresh, Teavana -- all of their outlets wound up shuttered, though the last two brands still exist, and their products continue to be sold in Starbucks locations.

Now, the coffee chain is trying again with another stand-alone brand: Princi. It's a somewhat upscale bakery -- rather like Like Boulange was -- but the small chain started by Rocco Princi in 1968 hasn't had any U.S. locations.

Starbucks changed that when it debuted a Princi store near the company's headquarters in Seattle. It's a similar opening move to the ones it used with Teavana and Evolution Fresh, but this time, the company has a different long-term strategy. 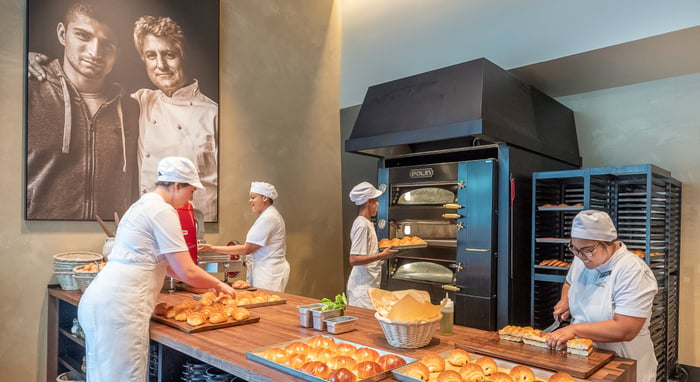 Boulange had 23 locations when Starbucks bought it, but it's fair to say the acquirer never wanted to grow it as a separate business -- the intent was to integrate its menu into that of Starbucks' namesake cafes. The same could be argued for Evolution Fresh -- its super-premium, cold-pressed juices never looked viable as the basis for their own chain, but they make a lot of sense as an option in Starbucks locations and in grocery stores.

Teavana was a different story. It successfully grew to nearly 400 locations, and its failure can largely be traced to the decline in mall traffic that has happened over the past few years. It simply made little sense for Starbucks to keep a second chain of stores open in malls where it already had one (or sometimes more) of its own locations.

Starbucks has already committed to make its new bakery brand the exclusive food partner for its Reserve and Roastery locations. Princi's have already opened inside the Shanghai Roastery and the first Reserve store at Starbucks' Seattle headquarters. Princi will also be part of the upcoming Roastery locations in Milan and New York.

Starbucks only plans a handful of Roastery locations around the world, but it may eventually open as many as 1,000 Reserve stores. It also plans to add Reserve bars to roughly 20% of its existing Starbucks locations. Princi is slated to be a part of that premium segment expansion, and while the company may open more bakeries under the Princi nameplate, that's not its core strategy for the brand.

A piece of the premium puzzle

Seattle is both Starbucks' home base and its No. 1 testing ground. The market that now hosts an outlet for every piece of what the company calls its "Siren Retail" higher-end business. That includes a Reserve store, Princi, and Starbucks stores with Reserve bars.

Stand-alone Princi locations will also open in two other major markets -- New York and Chicago. These cities will also have Roastery locations, and have been prime test markets for the company dating back to its initial national expansion.

Princi is unlikely to face Boulange's fate because Starbucks clearly knows what it wants to do with the brand -- it's going to use the bakery and its products strategically. The brand's baked goods may appear in high-end coffee shops around the world -- but stand-alone locations will remain rare and special.

By pairing higher-end baked goods with pricier and harder-to-find beverages, Starbucks is building a more-complete premium experience -- and one that should lead to larger average checks at the upscale outlets it has such high hopes for.