The factory automation company shrugged off weakness in its automotive end markets and demonstrated it can generate growth from many sources.

Stock in process automation company Rockwell Automation (ROK -0.41%) bounced nicely after its recent third-quarter results and gave investors hope it could have a much better second half than its first. Let's take a look at what's gone on with the company in 2018, and why there's cause for optimism going forward.

Rockwell Automation's stock usually commands a valuation premium to its peers because of its long-term growth opportunity from the Internet of Things (IoT). The company's software, systems, and controls make it a key solution provider for companies looking to collect, store and analyze data in order to run automated processes better.

While long-term secular growth looks assured, it's the cyclical part of its growth that has come under scrutiny in 2018. It hasn't been an easy year for Rockwell shareholders, not least because they watched on as management rejected a $225 bid from Emerson Electric (EMR -0.10%) in the fall, and then watched on as its peer significantly outperformed while Rockwell's stock has declined in 2018. 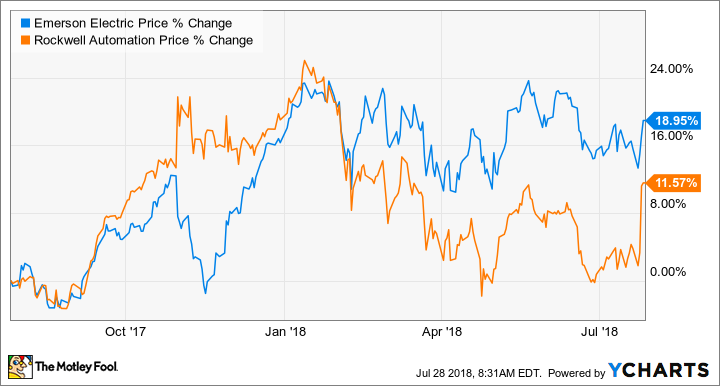 There are three reasons why.

First, Rockwell's traditional end market is factory automation (automated processes in manufacturing and industry) while Emerson Electric's strength is in process automation (continuous flow of fluid materials). As such, Emerson has significantly more exposure to the kind of energy and heavy industries that are bouncing back strongly from a very weak period in 2015-2017. It's not that Rockwell doesn't sell into, say energy and mining industries, it's just that Emerson has more exposure.

As you can see below, Emerson's organic sales growth started to surpass Rockwell's in the latter's first quarter. 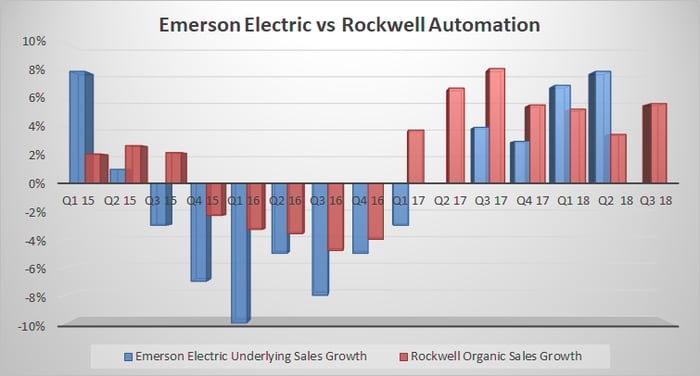 Second, one of Rockwell's traditional end markets, namely automotive, is experiencing a cyclical slowdown in the U.S. For example, Rockwell's automotive market sales were down 10% in the most recent third quarter. Moreover, with analysts forecasting that U.S. car production has plateaued there is a lot of uncertainty around what Rockwell can expect out of automotive in the next few years.

Putting all this together, it's clear that there were significant reasons to doubt Rockwell's earnings guidance going into the third quarter.

What the market may well have forgotten is that U.S. industrial production is improving in 2018 and there are plenty of industries other than automotive which have growth potential. Indeed, the subject matter came up on the second-quarter earnings call with CEO Blake Moret noting that capital spending of its customers "remained on the sidelines compared to some of the historic ratios."

The good news from the third quarter was that customers appear to be starting to spend. According to Moret on the earnings call: "heavy industries performed well and grew above the company average in the quarter, led by growth in semiconductor, metals and chemicals. Consumer also grew above the company average, led by strong growth in food and beverage." Mining was particularly strong in the third quarter.

Moreover, looking ahead to the fourth quarter, Moret argued that automotive would start to come up against easy comparisons, although he declined to give guidance on it for fiscal 2019. 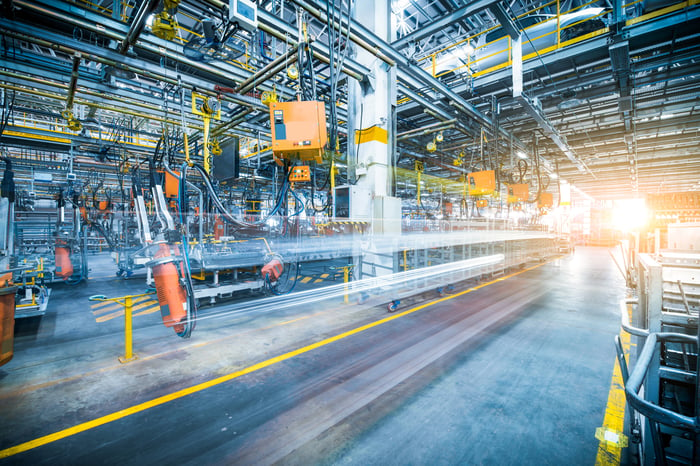 All told, automotive sales/production in the U.S. are slowing, but that doesn't mean Rockwell can't generate growth from other industries. Meanwhile, the company's information solutions & connected services (part of its connected enterprise/IoT initiatives) revenue is growing in the double-digits and at an estimated $300 million for 2018 is forecast to make up 4.4% of sales.

On an estimated PE ratio of 23 times earnings for 2018 and current price to free cash flow multiple of around 25.6 times, Rockwell looks fairly valued to me. However, if you believe it will hit analyst consensus earnings estimates of $8.92 in 2019 then there is upside potential. A fair valued stock can rise in line with its earnings growth (in this case around 12%) and that wouldn't be a bad return for investors.