While the broader apparel retail sector has struggled, these three stocks have surged.

It's tough out there for retailers these days. Nearly 10,000 stores closed last year, marking the greatest number of closures since data has been kept. Mall vacancies are at their highest since 2012, and department store chains, the great standbys of 20th century retail, are fast downsizing.

However, the economy is still thriving, and a number of apparel stocks have surged in recent months as the worst of the "retail apocalypse" appears to have passed. Retail stocks may not be the first place investors look for big returns, but all three of these stocks have tripled over the past year. Let's see why Vince Holding (VNCE 1.08%), Canada Goose (GOOS -4.82%), and Fossil Group (FOSL -15.47%)have all soared. 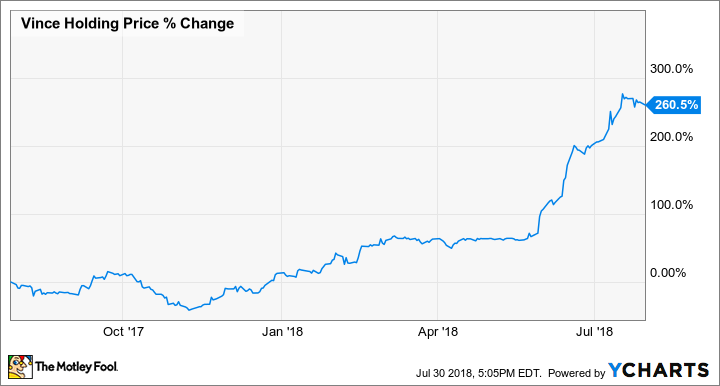 Up 260% since last year, Vince Holding's gains have stayed largely under the radar even as the parent of the Vince chain of luxury clothing stores has posted better numbers than expected. In its most recent quarter, direct-to-consumer sales increased 15% and comparable sales were up 12.5%, with strong growth in the company's full-price stores.

The company is still facing broad challenges: Revenue was down in the recent quarter by 6% due to a planned decline in the wholesale division as the company reduces the number of retail partners it sells to. Gross margin improved 2.7 percentage points to 46.8% due to the shift to direct sales, however, and the company's bottom-line loss narrowed significantly from -$1.88 to -$0.49.  Vince stock is up nearly 50% since that report, as the news seems to confirm expectations of a comeback. 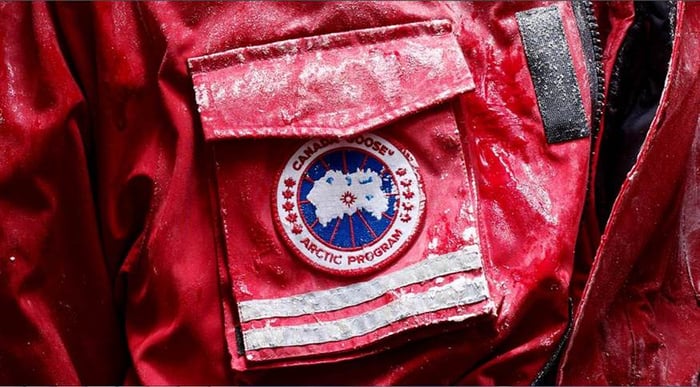 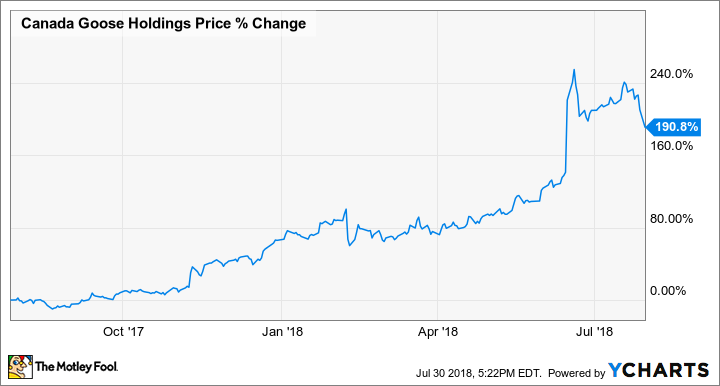 Like Vince Holding, Canada Goose is a luxury brand that has surged over the last year. But its recent IPO puts it in a different class from Vince. Rather than being caught in the midst of a turnaround, Canada Goose shares have exploded -- the company is unlocking the power of a unique brand of high-end winter coats, and expanding carefully. It's adding a handful of stores around the world, and expanding the reach of its e-commerce business.

The stock skyrocketed 33% on June 15 after it announced that revenue soared 144% to 124.9 million Canadian dollars, easily beating estimates. Gross margin expanded 830 basis points to 62.7% as the company transitions away from a wholesale model to a direct-to-consumer one. That strategy also led to a surprise profit of CA$0.09, up from a loss of CA$0.15 a year ago.

At the same time, the company announced three new stores in North America as it continues its methodical expansion. It also recently outlined its strategy in China. As a result, Canada Goose is the rare apparel company that investors see as a growth stock. 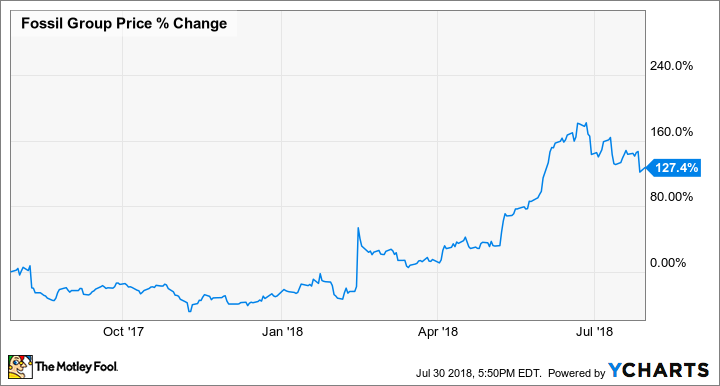 While Fossil Group, the maker of luxury accessories including watches, belts, and wallets, hasn't tripled over the last year, the stock certainly deserves a spot on this list: It is actually up more than 200% year-to-date as its turnaround efforts start to gain traction. Despite those gains, Fossil shares are still significantly below where they were five years ago.

However, the watch-maker is finally showing some progress in wearable tech, and the stock jumped 30% in the days following its most recent earnings results. Although Fossil reported a 2% drop in revenue in the period, results still beat the company's expectations, and gross margin increased 70 basis points to 50.5%. Sales of connected watches, a key growth market for Fossil, nearly doubled in the period, while Fossil brand watches grew 4% and comparable retail sales were up 5%.

Watches make up more than three quarters of the company's sales, so it's crucial for the company to return to growth in that segment. That's also why connected watches will be key in the company's future. Though Fossil is still operating at a loss, growth in the areas above has been enough to spark a recovery in the share price.

The three stocks above have all benefited from growth in the luxury retail market at a time when the global economy is strong and expanding. Fossil and Vince, especially, have jumped over the past year due to low expectations in retail, and the expanding gross margins at these companies, especially Vince and Canada Goose, show that growth in e-commerce and the direct-to-consumer channel may benefit apparel brands on the bottom line.

There's no guarantee that these three stocks will continue moving higher, but their strong performance over the past is a reminder that blockbuster growth can come from even the most unexpected corners of the market.

Why Fossil Group Stock Rocketed as Much as 44% Today
415%