These solid companies have non-prohibitive valuations and could feasibly double their payouts within the next five years.

Any company that can double its dividend over a five-year stretch is delivering rapid payout growth. To reach that target, the company would need to raise its distribution at an average annual rate of roughly 15% over the stretch. Of course, doubling your dividend payout in every five-year period is a lofty target, and taking extra time to clear that bar shouldn't be taken as a negative, but investors seeking dividend growth can generally feel very satisfied if that standard is met.

To get an idea of stocks that stand a good chance of doubling their payouts over the next five years, it helps to look for companies that are paying out a relatively small portion of their earnings and free cash flow (FCF), have catalysts to improve cash flow going forward, and have a history of regular payout growth. Read on to see why Apple (AAPL 0.90%), Southwest Airlines (LUV 0.85%), and Hanesbrands (HBI 4.46%) are attractive stocks that could double their payouts in the not too distant future. 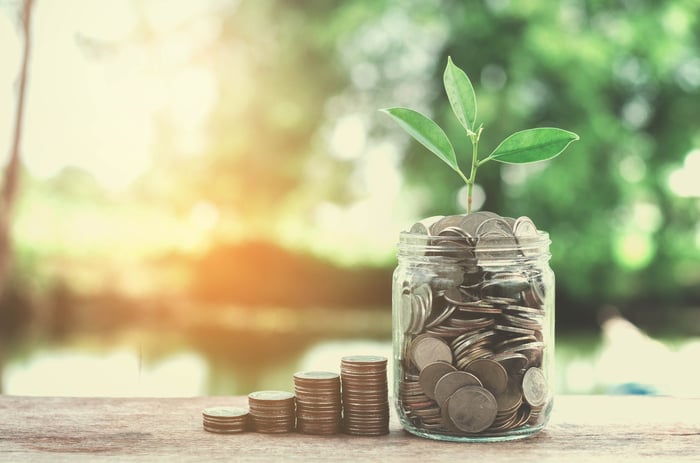 Apple has shown a commitment to dividend growth since it resumed sending income to shareholders in this way back in 2012, delivering payout growth in each subsequent year and boosting its total dividend roughly 93% over the stretch. Apple's current yield comes in at a less-than-world-beating 1.4%, but the company has aggressively raised its payout in recent years and has leeway to continue the trend.

The cost of distributing its current payout comes in at just 28% of trailing free cash flow. That's a ratio that leaves plenty of room for dividend growth -- particularly as FCF looks poised to continue climbing. 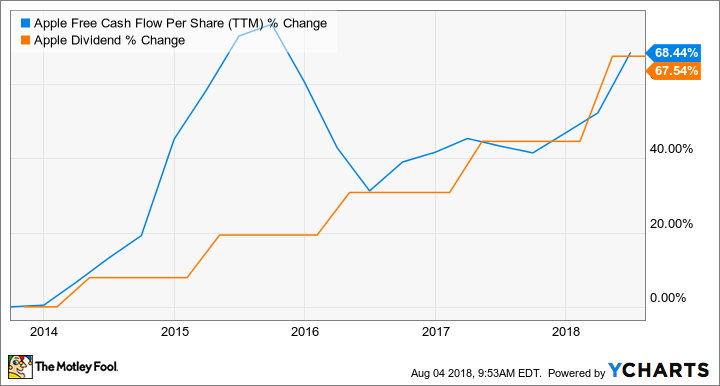 It's worth noting that Warren Buffett and his team have made Apple Berkshire Hathaway's largest holding, citing the company's stellar brand strength and the moat created by the interplay of its hardware-plus-software ecosystem as reasons for betting big on the tech giant. These characteristics should help Apple continue to command enviable profit margins and deliver payout growth for shareholders.

As Buffett has noted, the company has fantastic brand strength and very high levels of customer satisfaction. It's also attracted the most uniquely valuable customer base in its industry. iPhone devotees not only pay top dollar for regular refreshes of Apple's mobile hardware, they also spend roughly 2.5 times more on in-app purchases than users on the Android operating system.

Apple's hardware empire still looks sound, and the company has significant avenues through which to growth as it expands its services segment. This high-margin section of the business sees the company generating recurring sales through its own subscription offerings and taking a commission on each app sold and in-app purchase conducted through its platform. Spending on the iOS ecosystem should continue to grow at a healthy clip, with one estimate from Sensor Tower expecting that per-user sales will have climbed roughly 40% from 2017 through 2020.

Beyond the mobile market, Apple has underappreciated opportunities to leverage its high levels of customer loyalty in the connected home and Internet of Things spaces. It's also got a growth catalyst in the form of international expansion -- particularly in China.

After the iCompany's recent blockbuster earnings report, shares trade at roughly 18 times this year's expected earnings, a level that leaves room for capital appreciation and looks appealing in light of the big dividend growth that's likely in the pipeline.

Like Apple, Southwest Airlines is a stock that Berkshire has been loading up on, and one that deserves the attention of investors on the hunt for big dividend growth. As fellow Motley Fool writer Joe Tenebruso recently pointed out, the airline has been having a lot of success growing its free cash flow, and it has passed the good fortune along to shareholders in the form of big payout increases. 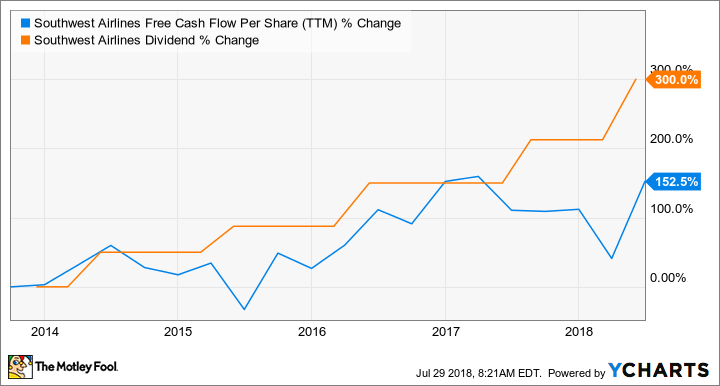 The company has delivered annual dividend growth for six years running and quadrupled its payout over the last five years, and its last increase come in at a hefty 25%. Granted, its 1.1% yield comes in well below the S&P 500 average yield of roughly 1.8% and the 2.9% yield offered by a 10-year U.S. Treasury bond, but shareholders can probably count on robust dividend growth going forward.

The company's payout ratio sits at just 15% of trailing earnings and 36% of trailing free cash flow, and it looks like the airline should be able to continue expanding profits and FCF going forward. Southwest Airlines stock also looks to have big pricing upside, with shares valued at 14 times this year's expected earnings and the company expanding its services domestically and internationally.

Hanesbrands trades at roughly 10 times this year's expected earnings and offers a 3.3% dividend yield. The clothing and apparel company has tripled its annual distribution over the last five years, but it appears to be in position to continue delivering rapid payout growth going forward.

The cost of distributing its current payout comes in at less than half of trailing free cash flow -- and management has made clear that growing the income it returns to shareholders continues to be a top commitment. Hanesbrands' most recent investor day conference listed returning income to shareholders as its second-highest capital allocation priority, trailing only reinvesting in the business. Acquisitions and share buybacks came in at third and fourth on the priority list, respectively.

In addition to the company's relatively low payout ratios, it looks like Hanesbrands is on track to deliver top- and bottom-line growth. The company is reducing operating expenses while also building its online business and continuing its international expansion efforts.

Through these initiatives, Hanesbrands expects that cumulative free cash flow from 2018 through 2022 will reach roughly $4 billion -- up from the $2.2 billion generated from 2013 through 2017. If the company were to hit that target, it could double its dividend payout across that stretch and still have the cost of distributing its payout come in at roughly half of free cash flow in 2022. That's a trajectory that should be appealing for investors seeking dividend growth, especially because Hanesbrands already boasts a solid yield.