Goldman Sachs warns investors to get out while you still can.

Seagate Technology (STX) stock has had an incredible run, more than tripling in price from its low point in May 2016 through its recent high hit in April -- but is that run now done?

One analyst thinks so. This morning, investment banker Goldman Sachs announced it is downgrading Seagate stock from neutral to sell. At a closing price near $55 yesterday, Seagate stock was already approaching Goldman Sachs' $50 price target. But as the banker explains in a note covered today on StreetInsider.com (subscription required), things are going to get worse for Seagate before they get better -- and so Goldman is cutting its price target, this time to just $44 a share. 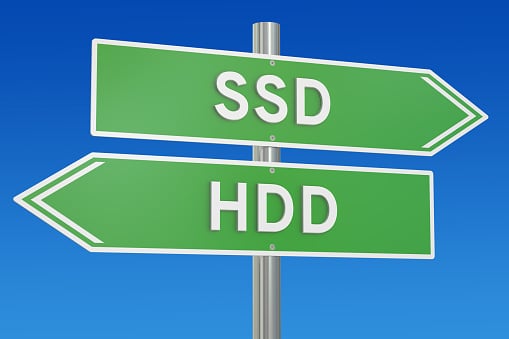 A bit of background may be in order. Seagate has historically been best known for its hard disk drives (HDD) -- the spinning disk that provides memory for your PC. Over time, as semiconductor-based flash memory has become cheaper, and solid-state drives (SSD) more popular, Seagate has begun manufacturing that particular type of memory as well.

But even so, HDD remains Seagate's bread-and butter-business. "We shipped 338 exabytes of HDD storage capacity" in 2018, the company said in its recently filed 10-K report with the SEC. These HDDs made up the bulk of the company's $11.2 billion in fiscal 2018 revenue, helping to earn 30% gross margin for the company.

"Our principal products are hard disk drives, commonly referred to as disk drives, hard drives or HDDs," explains Seagate. While it's true that "in addition to HDDs, we produce a broad range of data storage products including solid state drives ("SSDs"), solid state hybrid drives ("SSHDs") and storage subsystems," HDD sales are what really drive the business for Seagate.

That could prove problematic, however, because in its note this morning, Goldman Sachs warns that things are about to get really bad for the HDD business. Computer storage is a "cyclical" market, characterized by times of undersupply, when prices spike and HDD and SSD makers can earn large profits -- and times of oversupply, such as occur when manufacturers rush to increase production to capture those profits, flooding the market and driving prices right back down.

Right now, the SSD market is in a state of oversupply, and this is creating "secular challenges" for companies like Seagate that sell a lot of HDDs as a result. This is because when one form of memory gets cheaper, makers of the other form of memory often have to drop their prices as well, so as to remain price-competitive.

Goldman sees this dynamic forming this year, and predicts that 2018 will be the "cyclical peak" for HDD prices. As early as next year, therefore, prices could decline, profit margins will be squeezed, and profits will drop for Seagate, creating "headwinds" to profits growth.

So what does this mean for investors? Right now, Seagate stock is selling for a not-unreasonable 18 times trailing earnings -- and a downright cheap-looking 8.5 times forward earnings, according to Yahoo! Finance -- reflecting investors' belief that all is well at Seagate.

Most analysts, too, are calling for Seagate's earnings to continue rising over the next few years -- from $4.05 per share this year to as much as $6.33 per share in 2021, according to data from S&P Global Market Intelligence. Goldman doesn't share this view, however, predicting an imminent downturn in the company's HDD business. This suggests that the company's stock is not as cheap as other analysts' estimates make it appear.

What's truly worrisome, though, is that a few months ago, Seagate competitor Micron predicted that by 2021, 4 out of 5 PCs and laptops sold will have SSDs providing their memory. If that comes true, it's possible that this latest downturn in the HDD price cycle might be one that never turns back up again. While that particular prediction didn't make it into Goldman's sell recommendation, it just might be the strongest argument in favor of following the analyst's advice and selling Seagate stock right now.

And by the way, with Seagate stock down 6% already today, that appears to be exactly what investors are doing.