Here's how the sports apparel company plans to drive growth in the coming years.

When Under Armour (UA 2.49%) (UAA 2.95%) released its second-quarter financial results on July 26, investors focused largely on the company's forecast for higher restructuring costs. However, Under Armour's senior leadership team shared some important information during the subsequent conference call that many investors overlooked.

Here are the key takeaways for long-term shareholders.

Becoming more than just a brand

... I believe as well as do many others believe that Under Armour is a great brand. I think we've proven that. And one thing is certain, is that great brands endure ... And one thing that is certain that we've learned over our 20-some-year history as a company is that great product wins. That is it at the end of the day, and that's what has established and built this brand. But in addition to a great product, we're now also driving operational discipline. We're looking to make it a true core competency for the business that I believe and we believe will really truly unlock the creative potential that this company has. And the good news is that we're making great progress against it. And so hopefully you see that through things like our inventory initiatives that we're attacking.
-- Founder and CEO Kevin Plank

Under Armour has long been respected as a great performance-focused brand for athletes and those who aspire to become more like them. The company appears to be going back to its roots in this regard, by eliminating nearly 50% of its stock keeping units (SKUs) -- essentially, the number of items it sells -- in order to make sure "every product does something." In fact, CEO Kevin Plank said during the call that "when you put an Under Armour product on ... it should make you better." I love this mentality because it gets back to the core of what Under Armour's brand stood for in its early -- and high-growth -- days: a laser-like focus on boosting athletic performance.

But Under Armour is working hard to become more than just a brand -- and more than just a company that makes great products. Plank wants to build greater efficiency into Under Armour's operations by slashing unnecessary costs and optimizing inventory levels. He also wants to maximize the company's return on its marketing investments and quicken its new product innovation. Perhaps most importantly, he wants all this to become part of the Under Armour culture to ensure that it persists over the long-term.

If Plank is successful, Under Armour could once again produce returns for investors that are commensurate with the strength of its brand and the quality of its products.

We'll build over 200 stores in the world ... this year, and we will continue to do that kind of amount going forward and maybe even accelerating it because we do believe that in every part of the world, there is a retail component that's needed to actually meet the consumer, as the consumer expects that 360-degree or always-on experience with the brand.
-- President and COO Patrik Frisk

Under Armour's direct-to-consumer (DTC) operations remain a key aspect of its growth strategy. The company plans to expand its retail store base as a means to strengthen its relationship with its customers. Combined with Under Armour's fast-growing e-commerce site, these retail stores will help to provide a more "holistic expression and experience" of Under Armour's brand to consumers, according to COO Patrik Frisk. 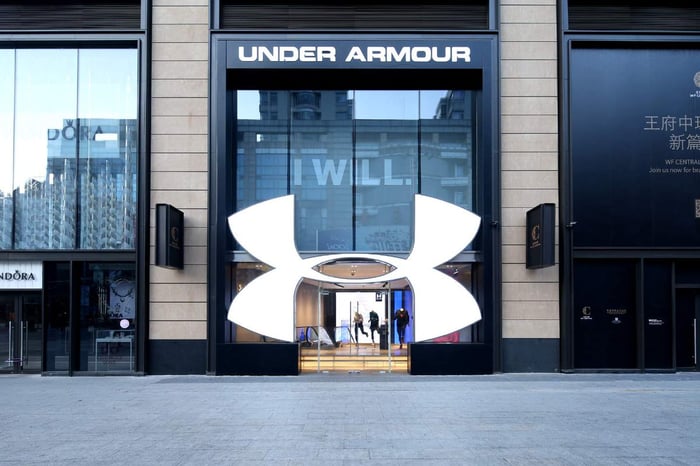 Under Armour's retail stores remain a core component of its growth plan. Image source: Under Armour.

In all, Under Armour's DTC revenue rose 7% to $414 million in the second quarter, and accounted for 35% of the company's total revenue.

Nike isn't the only one partnering with Amazon

... Amazon's a great partner to us. We're not using Amazon at all as any sort of a clearinghouse. We're dealing with Amazon like we deal with our other wholesale customers. And we have a global relationship with them in the sense that we're also doing business with them in Europe and in India. So our business with Amazon is very healthy. We have a strong relationship and the business continues to grow, and we will continue to work closely with Amazon into the future. We believe it's a channel distribution that's important for the brand and we have a very strong relationship.
-- Frisk

Much was made about Nike's (NKE) partnership with Amazon.com (AMZN 3.04%), and rightfully so -- Amazon's powerful e-commerce platform has provided Nike with a valuable new distribution outlet that has helped to boost sales of its products.

Now it appears that Under Armour wants some of that Amazon magic for itself. With strong sales results to date, Under Armour is increasing the number of items it sells on Amazon.com. This should help offset some of the sales pressure Under Armour has faced since the bankruptcy of major sporting goods retailer Sports Authority in 2016 -- as it's done for Nike -- and any additional store closures by other struggling brick-and-mortar retailers.

Revenue in North America was up 2% or 1% currency-neutral. This result was slightly better than our original expectation due to additional inventory management actions and better-than-planned service levels. In EMEA, revenue was up 25% on a currency-neutral basis with strong growth across the wholesale and direct-to-consumer channels and particular strength in the U.K., Germany, and Spain. Currency-neutral revenue in Asia Pacific was up 28%, with strong balanced wholesale and direct-to-consumer growth and continued strength in China, Korea, and Australia. And finally, revenue for Latin America was up 12% currency-neutral, and in this region, we remain focused on optimizing our mix of the right partners and business models across the portfolio.
-- Frisk

Looking even further ahead, investors should expect Under Armour's international operations to drive the bulk of its sales and profit growth in the coming decade.