For almost five years, the "sharing economy" has been the Next Big Thing. Uber, Lyft, and Airbnb are the most popular names underscoring a monumental shift: Access to material goods is now more important than ownership of said goods. There are hundreds more companies banking on this shift.

Tien Tzuo, founder and CEO at Zuora (NYSE:ZUO), would take issue with one part of this narrative: By his thinking, it's really more of a subscription economy than a "sharing" one. And he plans on making sure his company is the catalyst that enables today's businesses to pivot toward a subscription model.

I plan on buying shares of Zuora when Motley Fool trading rules allow. Here are three big reasons I'll be doing so. 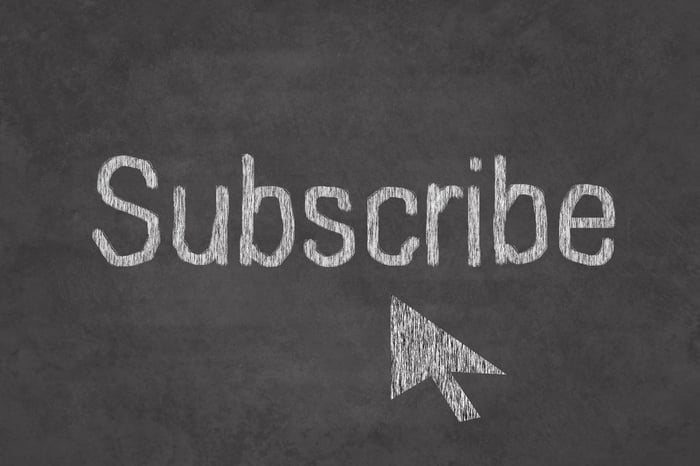 The right man for the job

In 2005, Peter Gassner was an executive at Salesforce when he realized something: Pharmaceutical companies had very specific requirements for their cloud solutions that Salesforce couldn't meet. That led Gassner to found Veeva Systems in 2007, a company I have been following since its 2013 IPO -- and currently own shares of.

In that time, Gassner has used Veeva CRM and Veeva Vault to transform the drug industry. Veeva shares have responded in kind, quadrupling since May 2014.

I bring that story up because it serves as a template for Tzuo's journey. He was Employee #11 at Salesforce, and he, too, noticed a blind spot in the company's approach. Tzuo saw that typical enterprise resource planning (ERP) software was ill-equipped to serve the subscription economy. "We also knew that our companies...were struggling with back-office billing systems, which were critical to the success of this business model."

Therein lay the opportunity: replacing legacy ERP software with an initial focus on back-office billing systems, with the overarching goal of enabling companies to shift toward the subscription economy.

There's no guarantee Tzuo will have the same success Gassner had, but the hallmarks are there: high insider ownership -- Tzuo owns 10.2% of Class B shares -- and high marks for corporate culture. Zuora boasts a 4.6-star rating on Glassdoor and a CEO approval rating of 94%.

The sweet spot of the emerging subscription economy

On the company's first conference call in May, Tzuo demonstrated how far-reaching the subscription economy could be. While many assume it's only technology and ride-sharing companies that are adopting subscriptions, Tzuo talked about how Zuora was helping -- of all things -- a porta potty company adopt a subscription model.

Right now, Zuora is focused on billing and revenue-recognition software. The total addressable market for such cloud-based solutions stood at $2 billion in 2017. The company's $120 million in cloud-based revenue for 2017 means that it's captured about 6% of the market.

But according to technology industry analytics firm MGI Research, that addressable market is expected to grow by 35% per year for the next four years, reaching $9.3 billion by 2022. The pie that Zuora is going after could actually be even bigger: Over time, the company is likely to focus on more than just billing, since the ERP market's estimated size of $40 billion by 2021 could easily be eroded by other Zuora-like upstarts.

Zuora isn't profitable now (more on that below), but that's largely because it's investing hand over fist in its future. That's a wise move given the size of the opportunity here.

Momentum plus a defensible moat

The huge market opportunity would mean nothing to Zuora investors if:

On the former, the company has shown strong momentum. While its total number of customers sits near 1,000, Zuora encourages investors to focus on customers with annual contract values (ACVs) over $100,000. 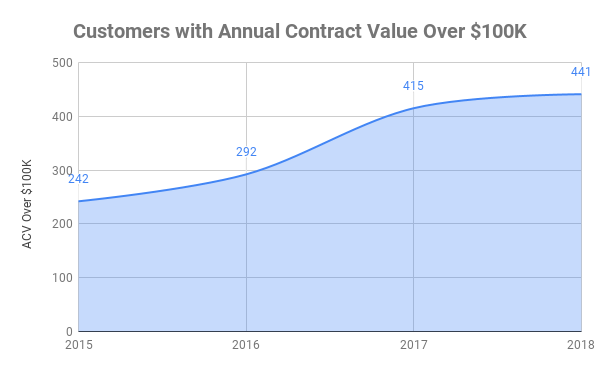 If the plateau in 2018 is alarming, it should be noted that this represents where the company stood after just one quarter in 2018. On a year-over-year basis, management reports that such contracts are growing by a rate of 25% to 30%.

When it comes to subscription revenue, sales have grown by 33% per year since 2015. Gross margins for that revenue have remained steady at an impressive 75%. Equally important, after backing out stock-based compensation, operating expenses have expanded at a slower pace: 20% per year over the same time frame. That means there's a clear path to profitability.

And when it comes to moats, the company has two which are emerging: high switching costs and network effects. Once a company starts using Zuora's products, it becomes a huge headache to migrate all those processes to another provider, pay for that to happen, and retrain employees on a new interface. The cost of switching platforms becomes prohibitive.

Most customers start off using the Zuora Central Platform and expand over time to use some combination of Zuora Billing, Zuora CPQ, Zuora Collect, Zuora Insights, and Zuora RevPro. The best way to measure if the company's products are not only keeping customers locked in but adding solutions over time (i.e. benefiting from network effects) is to hone in on the dollar-based retention rates. Dollar-based retention rates account for the dollar volume of renewed services rather than customer renewal rates.

The sneaky offering that could really widen the moat comes from Zuora's Connect Marketplace. Here, third-party app developers can create tools on Zuora's platform for customers to buy. Over time, the more customers Zuora has, the easier it is to attract third-party developers, which makes the platform more attractive, in turn bringing in more customers.

Although it's still too early in the game to tell if the network effects of Zuora's Connect Marketplace will add noticeable strength to the company's moat, I'm optimistic.

As I said, when Motley Fool trading rules allow, I will be purchasing shares of Zuora for my own portfolio. Because it is a volatile, small-cap stock, fresh off an IPO, it will start by accounting for roughly 1% of my overall holdings. Given increased familiarity and continued momentum, I can fill out the position to a larger size over time.

For investors looking to capitalize on the burgeoning subscription economy, I suggest you consider doing the same.