Activision Blizzard's (NASDAQ:ATVI) second-quarter report once again revealed players are willing to spend massive piles of cash on in-game content -- to the tune of $1 billion for the period. In-game revenue is the lifeblood of the company these days, since its growth strategy is centered around driving player engagement with existing franchises as opposed to launching new ones every year to grow sales.

The Call of Duty franchise was a star performer on this front, helping the company deliver record in-game revenue for the first half of the year. The latest release in the series has been a big hit and it's created a vibrant player base leading to what's shaping up as the biggest Call of Duty launch in history, when the new version launches this fall.

What's more, the game maker announced that a new mobile version of Call of Duty will be released in China, the world's largest mobile market, through a partnership with Chinese tech giant Tencent Holdings (OTC:TCEHY), which could turn out to be very lucrative down the road. 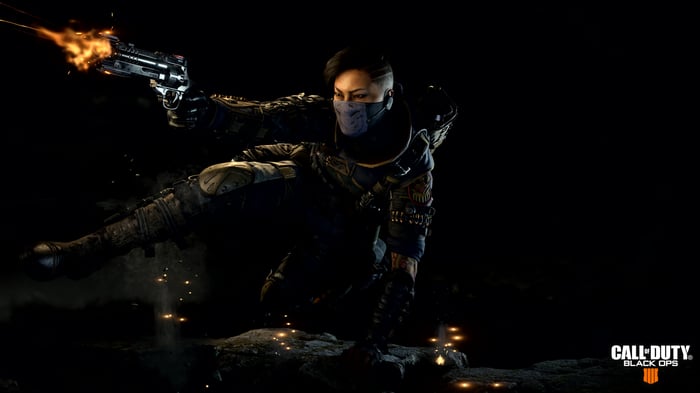 Call of Duty is back

Management attributed this performance to Call of Duty: WWII, Call of Duty: Black Ops 3, as well as Destiny 2. This is notable because the Call of Duty franchise is still expanding 15 years since the first version launched, yet it's still capable of carrying the company.

The first Call of Duty debuted in 2003, and today represents one of the company's four biggest franchises. Recently, however, the franchise started to show signs of reaching a plateau, as recent annual releases of the series have garnered mediocre reviews, and the Activision segment's monthly active users haven't managed to crest the Q4 2015 peak of 55 million.

Call of Duty's struggles seemed to climax with the 2016 release of Call of Duty: Infinite Warfare. Its science-fiction twist on traditional warfare wasn't popular with die-hard fans, who were used to playing more traditional combat scenarios found in the past versions of the game.

Last year's release of Call of Duty: WWII took the game back to its roots, and suddenly this "old" game seemed to be back to its former glory. Management reported that the player base for WWII is "holding a larger active player base than [Infinite Warfare]." Further, there's still an active community of 15 million players who are still engaged with (and spending money on) Call of Duty: Black Ops 3 (2015).

The record in-game spending clearly shows Call of Duty players are deeply engaged right now. Players are currently spending an average of 50 minutes per day across all the companies' games, with Call of Duty obviously figuring in that number. And Activision has a lot more up its sleeve to grow the franchise.

As I stated above, the company recently announced a partnership with Tencent to release a new Call of Duty mobile game in China. Mobile game sales are expected to make up 70% of China's game market by 2021. It's the largest gaming market in the world, valued at about $38 billion, according to gaming market intelligence provider Newzoo.

A release date hasn't been set, but this game has a lot of sales potential. Tencent's Timi mobile game studio will be in charge of developing the game to suit the tastes of Chinese players. This is crucial because multiplayer first-person shooters have found success in China, including the mobile version of Bluehole's smash-hit shooter, PlayerUnkown's Battlegrounds (PUBG), a game for which Tencent and Timi own the publishing rights in China. Placing Call of Duty development in the hands of a very capable developer that knows the Chinese gaming market well could prove a lucrative decision for Activision down the road.

Plus, Tencent has tremendous distribution and marketing muscle given its network of social media outlets, including Qzone and WeChat, with each boasting over 500 million monthly active users.

Black Ops 4 could be the biggest Call of Duty yet

Besides the new mobile game, Activision is gearing up for what could be the most successful Call of Duty release in history with the Black Ops 4 version debuting this fall. The game is receiving much hype for its new multiplayer survival mode called "Blackout," which puts a Call of Duty spin on battle royale-style gameplay, one of the hottest trends in gaming right now.

It seems that Activision is hitting record in-game revenue levels every year. The recent news of a tie-up with Tencent and the hype around Black Ops 4 should help the company keep that momentum going as we move through the end of the year.