The company's weak distribution-coverage ratio is a glaring hole in an otherwise decent earnings report.

The first quarter was particularly challenging for wood pellet producer Enviva Partners ( EVA -0.04% ), as one of its key infrastructure assets caught fire and wreaked havoc on its financials. Fortunately for the company, it was able to resolve this issue by the end of the quarter and was able to work around it without suffering too much more financial damage. Also, Enviva announced several new customer agreements that give it a sold growth runway well into the middle of the next decade.

For all that good news, there was one glaring issue in Enviva Partners' earnings report: Its weak distributable cash flow and the inability to cover its payout to investors. Let's look at the company's most recent earnings results to see what happened this past quarter, and why all these recent announcements may not be enough to get investors excited about this stock.

Even though one of Enviva's key logistics assets -- its Chesapeake, Virginia, export terminal -- was out of commission because of a fire in the previous quarter, the company was able to meet almost all of its contractual obligations in the quarter with its other export terminals. Granted, there were some additional costs with the extra work at its other facilities that ate into margins, but it also helped lead to a better-than-expected earnings result.

The other good news was that Enviva was able to get the Chesapeake facility operational again at the end of the quarter. Aside from potential insurance cost recoveries, this incident shouldn't affect results in the future. In fact, management reaffirmed its 2018 guidance along with confirmation that all issues with Chesapeake are resolved.

Also, as part of this quarter's earnings report, Enviva announced several new contract awards in the quarter that gave it even more revenue visibility over the long term. In total, the contracts that both Enviva Partners and its parent organization signed were for 700,000 metric tons per year for 15 years with several Japanese clients, and 650,000 metric tons per year for five years with a European customer. These contract agreements don't commence until 2021 or 2022, and now all of Enviva's production capacity is fully contracted out to 2025. 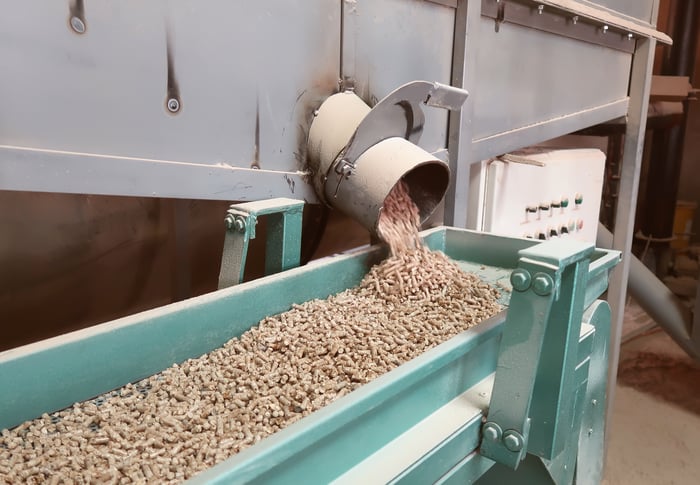 The one thing in this earnings report that should continue to make investors concerned is the company's abhorrently low distribution coverage, which was 0.58 times for the quarter. What that says is that Enviva is only generating enough cash available for distribution to cover 58% of its total payout. Again, the higher costs with working around the Chesapeake fire were partly to blame, but management continued to raise its payout this past quarter, and says it will be able to partly recover some of those shortfalls in the second half of the year.

As part of CEO John Keppler's prepared remarks during the company's conference call, he outlined management's plan for its payout, and gave reassurance that Enviva would be able to maintain its distribution growth:

Given our confidence that the positive production volume and cost trends will continue and the temporary nature of the impact of the Chesapeake event, our board elected to declare a quarterly distribution of $0.63 per unit for the second quarter of 2018, and we reaffirm the full year 2018 per-unit distribution guidance of at least $2.53. Distribution for the second quarter represents a 10.5% increase over the corresponding quarter of last year and is our 12th consecutive quarterly increase since IPO. The long-term fundamentals of our underlying business remain strong, and we expect no change to its growth trajectory from the temporal issues associated with the Chesapeake incident. 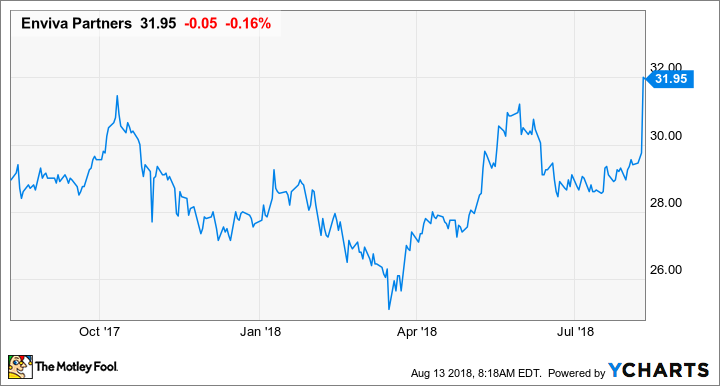 How can it maintain this payout?

I really want to believe in Enviva Partners as a business. The economics of selling wood pellets as a drop-in fuel alternative to coal for power generation are good in places like Northern Europe and Japan, and the company has a backlog of contracts over the next eight years that should ensure a very steady business. Plus, with more opportunities to acquire new facilities from its parent organization over the next few years, there are ample opportunities for growth.

All that said, it's getting harder and harder for management to be able to justify the payout it makes to its investors. Enviva's insistence on growing its payout when it can't cover the current amount with cash from operations just doesn't make much sense. As much as investors like to see larger income checks each year, they're much more attracted to an income investment that can grow sustainably for years. There is no way for Enviva to maintain this pace if its coverage is going to remain this low for an extended period of time.

Perhaps I'm wrong, and bringing the Chesapeake export terminal back into service will plug all the holes in Enviva's financial reports. However, the company has missed payout guidance in the past. At a minimum, we need to see the company generate enough cash to cover its payout. Until that happens, I would stay away from this stock and assume we're going to see a distribution cut sooner rather than later.