Second-quarter sales and earnings plunged lower, but CEO Alex Sinaga expects a return to form in the near future.

Telekomunikasi Indonesia (TLK -0.21%), the largest telecommunications company in Indonesia, reported second-quarter results on July 31st. The company is losing cellphone subscribers to lower-priced rivals, but management insists that charging higher prices for a higher-quality service is the right way to go.

In fact, the worst may be behind Telkom at this point, and the CEO sees better days ahead.

Telkom's business, by the numbers

In the second quarter, Telkom Indonesia revenue fell 7.4% from the year-ago tally to land at $2.30 billion. Earnings declined 48% to $0.21 per American Depositary Share. Backing out the headwinds resulting from a stronger dollar in relation to the Indonesian Rupiah, sales fell 3% in local currencies.

The company's wireless service, under the Telkomsel brand, serves 178 million customers, down from 193 million at the end of theprevious quarter and in line with the year-ago period's tally of 178 million subscribers. Voice and SMS revenues are plunging, but Telkom is enjoying a strong upward trend in data plan sales, which now account for more than half of the company's total revenue. 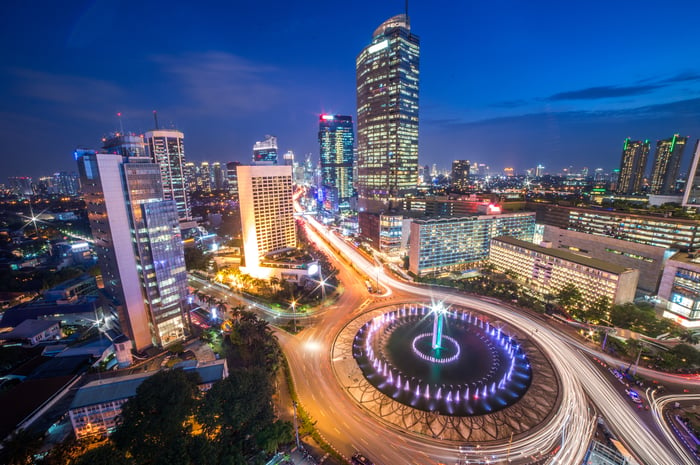 Part of the top-line pain came from intense competitive pressure as the Indonesian cellphone market has seen a price war play out over the last several years. But the company may have found a way out of this environment.

Telkom CEO Alex Sinaga is not interested in a race to the bottom where low service prices become the only selling point that matters. Instead, Telkomsel is building its wireless marketing around service quality and actually raising prices in some markets.

"As we believe that the data price has been too low, Telkomsel increased data price in a few selected areas around the Eid al-Fitr festivities in June," Sinaga said. "Nationwide, data prices increased by around 4% to 11%. Telkomsel will continue its strategy to realize data monetization."

That strategy should start showing stronger results in the third quarter, Sinaga said.

The company's capital expenses reached $531 million in the second quarter as Telkomsel continued to build out its 4G cellular network. Telkom added nearly 29,200 cellular base stations over the last year, boosting the network's connection points by 20%. All of these additions were 4G-capable.

In early August, Telkom also launched another telecommunications satellite to fortify its broadband services. Launched from Cape Canaveral on a SpaceX rocket, the satellite is parked in a geosynchronous position just northeast of Jakarta to connect the Indonesian archipelago as well as major hubs across Southeast Asia.

It's not cheap to pursue a quality-based business strategy in a price-sensitive market like Indonesia.

Telkom's investors didn't exactly embrace this report, as share prices are down almost 15% since the release. All told, Telkom's stock price has fallen 35% in the past year. Shareholders can only hope that Sinaga's promise of better results in the current quarter is on target.