It's boom times for the American trucking industry, with companies like JB Hunt and Old Dominion Freight Line enjoying 20%-plus sales growth (and even greater profits growth) in their most recent quarters. One company left out in the cold so far, however, has been rival trucker YRC Worldwide (YELL -0.83%), which last quarter saw sales inch up just 5% -- and profits plummet 24% -- despite strong demand for trucking services across the country.

This was a far cry from the sentiments that YRC's then-CEO James Welch expressed back in February, as he commented on how "positive pricing and demand trends" suggested the company would post strong results in 2018.

And yet, one analyst isn't giving up on YRC Worldwide stock. 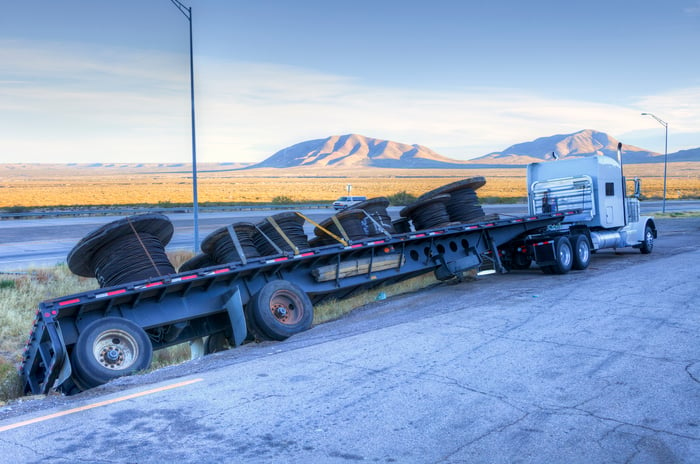 YRC Worldwide stock has had its share of problems, but one analyst thinks it can get back out of them. Image source: Getty Images.

This morning, Deutsche Bank announced it has decided to upgrade YRC Worldwide from hold to buy while maintaining its $13 price target on this $10 stock. After meeting with YRC's senior management -- including new CEO Darren Hawkins, CFO Stephanie Fisher, Controller Bri Simoneau, and investor relations VP Tony Carreno -- Deutsche came away convinced that YRC is finally on a path to improve both "yield" and "driver productivity," so as to more efficiently use its fleet of trucks and reap greater benefits from the improved pricing prevalent in the trucking industry today.

YRC is further taking steps to upgrade its "aging" fleet of trucks, explains Deutsche in a note covered on TheFly.com, and working to "improve labor flexibility" -- both strategies that should improve the company's ability to attract and retain drivers in today's competitive market.

In Deutsche's view, these efforts by YRC management have a chance of righting the ship and driving "better equity value" -- perhaps even enough to deliver 30% profits to investors.

Of course, this isn't the first time we've seen folks predict that YRC Worldwide was ready to turn its business around. Yet at first glance it's hard to see much improvement being made.

Despite a strong market for trucking services in America, YRC Worldwide remains a work in progress -- and an unprofitable one at that. According to the headline figures on Yahoo! Finance, YRC has no trailing P/E whatsoever, because it has no earnings.

YRC's net profit margin today sits at negative 0.1%, and even operating profit margins are a minuscule 2% -- a mere fraction of the 8.8% operating profit margin that JB Hunt earns for example, or of Old Dominion's much more robust 18.2% margin. YRC's still mired in debt -- more than $700 million net of cash. Its free cash flow number for the past 12 months is a discouraging negative $19 million. And without positive free cash flow, it's going to be hard for YRC to work down its debt.

What's under the hood?

But are there any signs of improvement at all at YRC? There are.

Although on a trailing-12-month basis, I admit that the situation at YRC looks grim, if you get a bit more granular and examine YRC's results on a quarterly basis, there do appear to be some signs of improvement.

Take free cash flow, for example. Although YRC has burned cash over the past year, it burned 32% less cash in Q1 2018 than it did in Q1 2017. In Q2 2018, YRC succeeded in generating more than $52 million in positive free cash flow -- a 25% improvement over Q2 2017 results. Add it up, and so far this year, YRC has already generated positive cash profits of $25 million, whereas in the year-ago period the company made just $1.7 million. And with cash starting to flow again, YRC succeeded in adding $67 million to its bank account over these past six months, while whittling down debt by about $7 million.

Granted, it's hard to know for certain that these improvements will last. Semitrailers don't come cheap, after all, and management's commitment to refresh its truck fleet is a promise that could quickly transform into significant deductions from free cash flow by way of capital spending. Unless YRC succeeds in growing cash from operations in tandem to cover its rising costs, the company could find itself right back where it's spent most of the past 12 months: burning cash.

Still, while I can't say YRC is fully out of the ditch just yet, it does appear to be turning the wheel in the right direction. I don't know I'd go so far as Deutsche Bank and declare it a bargain good for a 30% profit, but YRC stock is at least worth watching.

Maybe, just maybe, it's finally on the right road to recovery.