Beating on estimates is nice, but this trend in transaction payments is even better.

There's an enormous opportunity in the Chinese auto market. If a single player can create a platform that provides advertising, website hosting, and an ecosystem that connects auto dealers, car buyers, financiers, and insurance agents, it could be a coup.

That's exactly what Bitauto (BITA) is hoping to do through its namesake advertising and digital marketing arms, as well as its 44% stake in Yixin -- the transaction company aimed at connecting the aforementioned stakeholders. The company released earnings this week that had Wall Street excited, but there was an underappreciated tidbit that should have long-term shareholders very excited. 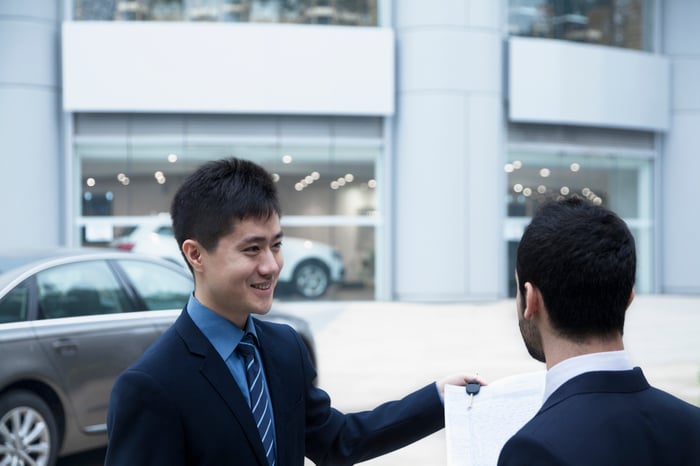 Before we get to that key detail, let's look and see what the company accomplished on the top and bottom lines.

As you can see, Bitauto displayed impressive leverage: a 29% increase in revenue resulted in a 94% jump in non-GAAP earnings! The key behind the huge jump was the fact that selling and administrative spending -- which accounts for the lion's share of all operating expenses -- went up a paltry 11%.

If we break down Bitauto's results by its three reporting segments, it's clear that transaction services continues to be the linchpin in the growth story.

As I stated above, the transaction services -- the bulk of which occur through Yixin, which Bitauto spun out last year and still retains a 44% stake in -- are intended to connect auto buyers with financing and insurance agents.

The key detail for investors to watch

Yixin has the potential for benefit from powerful network effects. If it can attract lots of auto dealers -- and, therefore, the buyers who come to them -- then insurance agents and financiers (i.e., banks) will be incentivized to join the platform. As more agents and banks join, car dealers will have even more incentive to join. It's a virtuous cycle.

But there's a catch that's stopped Yixin from becoming a truly powerful platform: the vast bulk of the financing for cars isn't done by third-party banks, it's done by Yixin itself. Not only does this weaken the network effect (agents might be less likely to join if only one entity is providing financing), but it also makes Yixin a riskier bet -- as the company is on the hook for any loan losses that could occur.

Bitauto and Yixin, however, are working hard to bring in more third-party providers. According to CEO Andy Zhang:

Overall, third-party financiers accounted for 19% of Yixin's 103,000 financed transactions for the quarter, or roughly 19,600 loans. During the first quarter of 2018, there were 8,800 such loans. In other words, the total number of third-party loans grew 120% sequentially. Year over year, the growth of such loans was 9,000%!

This is enormously important because:

For the third fiscal quarter, management sees revenue growing between 23% and 25% to a mid-point of RMB 2.895 billion. Over the past 12 months, the company has brought in roughly $0.93 per share in non-GAAP earnings. That means shares currently trade for roughly 23 times trailing earnings -- a very fair price given the company's growth and improved profitability.

Bitauto also has several other metrics making it look very attractive. The company reported that it has roughly $1.15 billion in cash and restricted cash on its balance sheet -- or about 75% of its current market capitalization of $1.55 billion. As of mid-Wednesday, the company's share of Yixin is also worth about $960 million, meaning the rest of Bitauto is valued at just under $200 million.

At the same time, shares will likely remain very volatile. According to some outlets, 66% of Bitauto's float is sold short -- an enormously high percentage. Time will tell if those shorts will win out or get squeezed, but if the company continues performing as it did in the most recent quarter, long-term shareholders could be handsomely rewarded for their patience.