Looking for a fat dividend and a cheap valuation? These three stocks are for you.

Income investors naturally gravitate toward stocks with big yields and low valuations. However, this type of investing can be fraught with risk, so investors need to be extremely picky about which stocks they choose to buy.

With that in mind, we asked a team of Motley Fool contributors to share a high-yield stock that they think is worth checking out today. Here's why they highlighted Newell Brands (NWL 1.53%), Brookfield Infrastructure Partners (BIP 1.20%), and Bladex (BLX 2.01%). 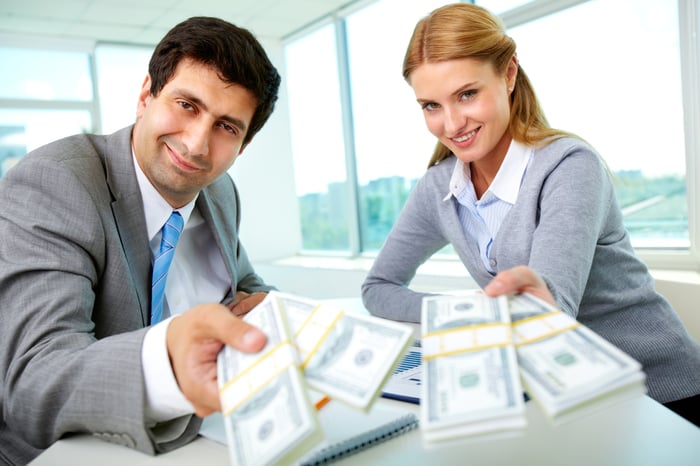 Maxx Chatsko (Brookfield Infrastructure Partners): In the last five years, units of Brookfield Infrastructure Partners have delivered a total return of 110%, compared to 91% for the S&P 500. However, that stat doesn't change the fact that this high-yield dividend stock is historically cheap. It trades at its lowest price-to-sales, lowest EV-to-EBITDA, and among the lowest price-to-operating cash flow per-share values in the last five years. It also sports a PEG ratio of 0.73 -- a remarkably cheap valuation for a $16 billion company.

Rock-bottom prices aren't the only thing that should attract investors. Brookfield Infrastructure Partners has gone on an acquisition spree in recent months, which should help propel the business and maintain growth for years to come. It included data centers from AT&T, Canadian energy pipelines from Enbridge, and an HVAC rental provider, Enercare. The acquisition from AT&T in particular completed the company's vertical integration in becoming a data utility, with assets now spanning tower infrastructure, fiber optic cables, and data centers. The idea of a data utility is relatively new, but it could prove lucrative for unitholders.

In all, those acquisitions totaled $1.3 billion, but management noted it had another $400 million in acquisitions -- also in data infrastructure and energy -- in the pipeline. Assuming all of the deals close, management expects them to deliver approximately $170 million in funds from operations (FFO) in their first year, which would more than offset the $130 million in annual FFO lost from a recent asset sale in South America that has concerned Wall Street in recent months. In other words, when the dust settles, it's likely that the market will have freaked out for nothing, which could allow units to resume their steady climb.

Lots of rubber, lots of glue -- Newell should stick this bounce

Anders Bylund (Newell Brands): At first glance, this household products giant might look like a lost cause. The maker of Sharpies, Elmer's Glue, and Rubbermaid containers is going through a rough patch right now. But there are upsides to Newell's downtrends, too.

The twin buyouts of Jarden and Elmer's in 2015 provided a quick boost to Newell's top and bottom lines, but the profits quickly started to thin out again. The company's annual free cash flows are running below where they were three years ago, despite a 119% wider revenue stream.

Investors embraced the acquisitions at first, followed by a merciless share price plunge when those cash flows began fading out. Today, Newell shares are trading 37% lower year to date and 56% lower over the last 52 weeks.

At the same time, the sinking share prices pushed Newell's dividend yield all the way up to 4.2%. You'd have to go all the way back to the financial crisis in 2009 to find a more generous effective payout.

The stock is trading at rock-bottom valuation ratios such as 9.5 times forward earnings and 0.8 times the company's book value. A price-to-book ratio of less than 1.0 means that investors see less value in running the business than in shutting down the company and selling off its assets.

That's a mighty harsh market verdict -- way too rough in my view.

I'm not alone in that analysis. The company recently authorized a massive share buyback program that should retire roughly one-third of Newell's shares in just a couple of years. Walking the talk, Newell CEO Michael Polk is buying thousands of shares in the open market. Activist investor firm Starboard Value is paring down its Newell holdings, spelling the end of an acrimonious proxy battle over the company's control and long-term strategy. All of these moves amount to votes of confidence in Newell's future, starting from this low point.

I wouldn't necessarily back up the truck to the buying window here, but Newell certainly deserves a second look if you're interested in turnaround stories and bountiful dividend yields.

A great house on a bad block

Brian Feroldi (Bladex): Investing in Latin America isn't for the faint of heart. Between corruption, political upheaval, and runaway inflation, there's always something to worry about.

As a Latin American trade bank, Bladex isn't immune from these troubles. However, the company's business is far more robust than you might assume. The reason is that Bladex doesn't take in deposits or issue loans to consumers; instead, the company helps facilitate international trade between Latin American businesses that need short-term financing or letters of credit.

The short-term nature of Bladex's business enables the company to shift money around rapidly as it sees trouble brewing. In addition, the company only deals with high-quality customers, which helps limit its losses.

Investors aren't focusing on those factors right now, though. Bladex's stock is currently trading near a 52-week low and below its book value. The dirt-cheap valuation has pushed its dividend yield above 7%, which is a monstrous number.

I'm normally wary of high-yield stocks, but I'm willing to make an exception here because I think that Bladex's fundamentals and long-term growth potential remain strong. While this will likely be a volatile stock for the time being, if you're after income, Bladex is certainly worthy of a closer look.