Over the past couple of years, Apple's (NASDAQ:AAPL) iPhone unit volumes have not really been growing much, languishing in the single digits. The first-ever decline in iPhone unit volumes occurred back in 2016, with shipments mostly stabilizing since (subject to seasonality). Instead of relying on unit growth, Apple has leveraged its pricing power to generate revenue growth, a strategy that has worked wonders following the release of iPhone X last year.

This year, the Mac maker is expected to release a trio of new iPhones: a 5.8-inch OLED model, a 6.5-inch OLED model, and a 6.1-inch LCD model. The launch of those new handsets could help Apple drive iPhone unit growth. 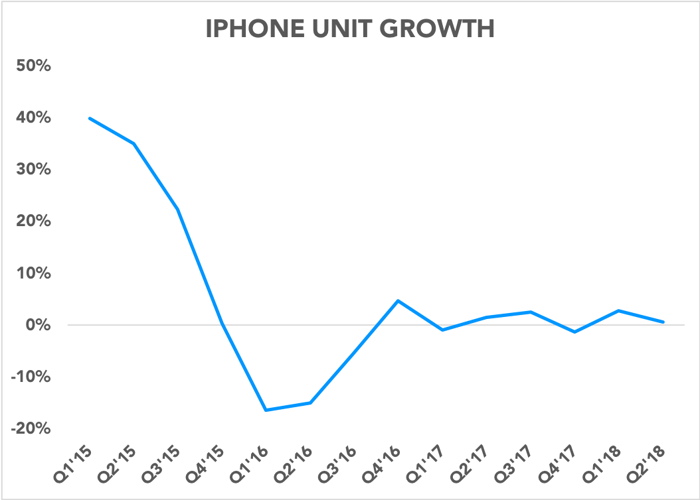 Suppliers are expecting a busy fall

DIGITIMES reports that prominent Apple suppliers Foxconn and Taiwan Semiconductor are expecting to post record revenue in the quarter following the launch. Foxconn has long been Apple's most prominent contract manufacturer, and TSMC has enjoyed a lock on producing the company's A-series processors for a couple of years now. Total shipments of the new lineup are estimated to hit 70 million to 75 million between the September launch through the end of the year, which would make it the most successful product cycle since the iPhone 6 release in 2014. That launch benefited from pent-up demand for larger phones.

While Apple has reported shipments of around 75 million to 78 million iPhones in all December quarters since 2014, it's worth noting that those are total iPhone units, including previous-generation models. The tech titan does not typically disclose granular details around its product mix, although CEO Tim Cook said on the May earnings call that iPhone X was the best-selling model for every week during the March quarter. If the 2018 lineup can command shipments of 70 million to 75 million from mid-September through the end of 2018, then it's quite conceivable that Apple could see stronger unit growth than investors have become accustomed to in recent years.

Pricing will be key

How Apple prices the new models will be of utmost importance, following widespread concerns that the iPhone X's $999 starting price last year limited its appeal. Adopting OLED for the first time was undoubtedly the most significant cost driver, but those costs may come down this year, in part because Apple is reportedly bringing on LG Display as a second OLED supplier. Apple could choose to keep those cost savings for itself, benefiting its margins, or pass along those savings to consumers in the form of lower prices, benefiting unit volumes. The company needs to find the right balance between profitability and volumes.

For what it's worth, longtime Apple analyst Ming-Chi Kuo predicted (via MacRumors) in June that the company would adopt a "more aggressive" pricing strategy after last year's criticisms. Kuo expects the 5.8-inch OLED model to be priced between $800 and $900, the larger 6.5-inch OLED model to cost $900 to $1,000, and the 6.1-inch LCD model to be $600 to $700. Those expected price ranges would make the 2018 lineup much more affordable relative to the 2017 lineup -- iPhone 8 started at $700 and iPhone X topped out at $1,150 -- while bringing newer technologies like 3D sensing and Face ID to more customers.

There are some challenges with walking back iPhone pricing, but doing so would probably be the right call for the iPhone business.