The streaming music pioneer is hitting 13-month highs, but the fundamentals have yet to catch up to the rally.

The gains keep coming for Pandora (P) investors in 2018. Shares of the digital music pioneer have been on fire lately, hitting new 52-week highs on Thursday and nearly doubling so far this year. A bullish analyst update earlier this week is keeping one of the market's most unlikely rallies going strong.

Pandora seemed to be left for dead last summer. Sirius XM Radio (SIRI -1.31%) abandoned plans to acquire Pandora, settling for a more cost-effective minority stake in the streaming platform. With Sirius XM content to ride shotgun instead of taking the wheel and listener numbers languishing, investors started dumping the stock through the latter half of last year.

The stock's scintillating success is limited to its year-to-date chart. Shares were actually trading higher early last summer, and had been trading in the double digits for years. However, momentum is clearly on Pandora's side regardless of when investors got in. The stock is taking the market's fancy once again, even if its fundamentals still leave plenty to be desired. 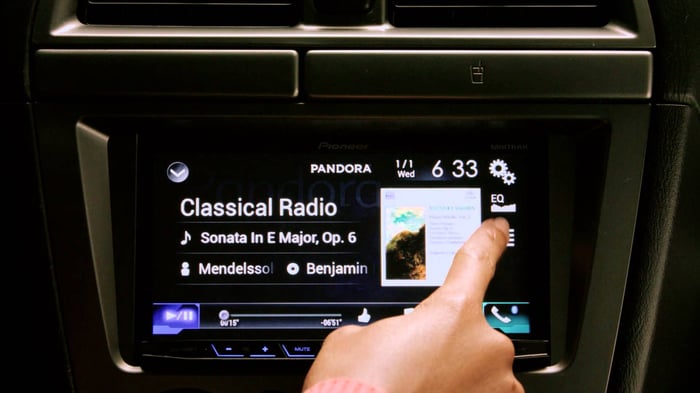 BMO Capital analyst Daniel Salmon sees the stock returning to double digits in the coming months. BMO met with Pandora's CFO, and Salmon walked away with a more encouraging view of the service. There are monetization improvements taking place with its self-serve ad platform, as well as data-driven targeting with its nascent podcast advertising offering. Salmon is sticking to his outperform rating as well as his $13 price target that implies nearly 50% of upside to Wednesday's close.

Investors may not see the renaissance of Pandora as a business if they only skim the surface. Pandora's revenue rose a mere 2% in its latest quarter. However, if you back out the revenue generated a year earlier from selling off its Ticketfly event ticketing business and winding down its service in Australia and New Zealand, you'd arrive at a more palpable adjusted top-line growth rate of 12%.

Pandora's audience continues to thin out. Active listeners have contracted to 71.4 million from 76 million over the past year. But revenue is growing because Pandora's getting more of them to pay up for the service. Subscription revenue has soared 67% over the past year as its premium subscriber base has risen 23% to 6 million.

Pandora is also generating slightly more ad revenue per freeloader, though overall advertising revenue is declining with the overall drop in listeners. It's clear that investors bidding up the stock are focusing on the success of Pandora as a premium service, even if paid subscribers only make up roughly 8% of its listener base.

Investors are happy, and Sirius XM is now getting back to the cost basis of its original investment last summer. Profitability may be a couple of years away and there's no reason to expect a return to audience growth anytime soon, but Pandora still draws a huge audience at a time when digital streaming is a hot niche for growth investors. It would be easy for Pandora to smoke out a buyer now if it wanted to, but with momentum on its side, there's no reason for it to start looking into that option. The highs can keep coming in the short run, but for the rally to be sustainable, the fundamentals will have to start improving in concert.