You don't always have to chase the fanciest tech companies to find growth in the market. A case in point is Texas Instruments (NASDAQ:TXN), which has delivered market-beating returns over the last decade making chips for things as banal as electric toothbrushes, among many other electronic devices.

But then there is NVIDIA (NASDAQ:NVDA), which has blazed a trail of growth lately, expanding its addressable market for graphics processing units (GPUs) to exciting things like self-driving cars.

Let's look at both of these chipmakers to see which stock is the better buy today. 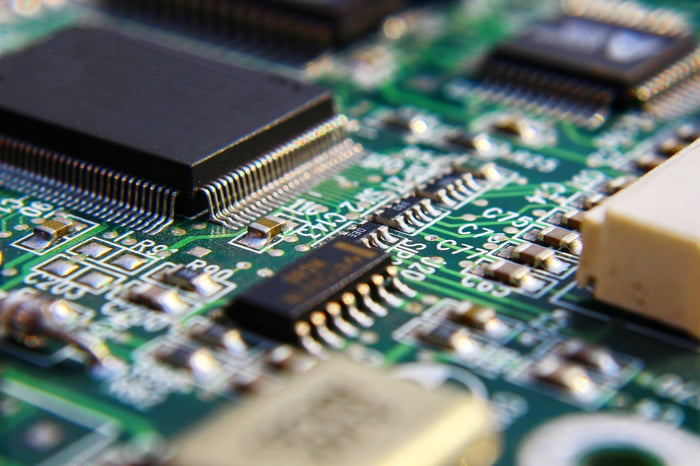 An expanding market for GPU technology

NVIDIA shares have been on a tear over the last three years, rising 1,110%, which brings its market cap to $164 billion. Driving those gains have been the graphics specialist's success at applying its GPU technology across different specialized markets, including self-driving cars and data center providers, in addition to selling graphics cards to PC gamers.

NVIDIA has gained the business of some of the world's biggest data center and cloud service providers, including Alibaba Group, Tencent Holdings, Baidu, Alphabet, Microsoft, and Amazon.com. These companies have turned to the advanced processing power of GPUs to handle massive amounts of data collected from their customers. The data center segment has been NVIDIA's fastest growing business over the last three years, with big wins from the aforementioned tech giants driving a 658% increase in revenue, which now makes up 22% of its total revenue.

The graphics chipmaker also boasts partnerships with more than 370 automakers and researchers working on self-driving cars. This has helped NVIDIA grow its automotive revenue 82% over the last three years.

However, gaming is still the star of the show, with the segment making up 57% of total revenue. The releases of megapopular games like Fortnite and the recent demand from cryptocurrency miners have driven a robust GPU upgrade cycle. NVIDIA has also received a boost providing custom graphics chips for the Nintendo Switch, which has sold nearly 20 million units since its launch in March 2017.

Continued strong demand in the data center and gaming markets fueled revenue and earnings growth of 40% and 91% year over year, respectively, in the second quarter. NVIDIA just announced its latest generation of GPUs for gamers (called Turing), which should put the company in a strong position in the near term against its rival Advanced Micro Devices and keep the stellar momentum going in its largest segment.

Sometimes, boring is just the ticket

On the other side, Texas Instruments' stock price is up 145% over the past three years, which brings its market cap to $112 billion. TI is among the leading suppliers for analog and embedded processors, which are used for a wide range of electronic systems and equipment, including mobile phones.

TI has been around since 1930 and is a more mature business in its respective markets compared to NVIDIA. Over the last decade, TI has only managed to grow its top line from $12.5 billion to about $15 billion. But growth has been picking up lately, reflecting strong demand from the automotive and industrial markets, which management believes represent the best growth opportunities. In the second quarter, revenue grew 9% year over year, much faster than the roughly 2% annual growth rate of the last 10 years.

TI has gained a strong position in the automotive and industrial markets, which made up 54% of the company's revenue in 2017, up from 51% in 2016. In addition to the added growth opportunity, management likes these markets because they have long product life cycles with a growing number of uses for TI's chips. What this means is that the more business TI gains from customers in these markets, the stronger its competitive position becomes as customers develop a relationship with TI over other suppliers.

Another competitive advantage for the company is its efficient manufacturing process, providing tremendous structural cost advantages that have been fine-tuned for nearly a century. Shareholders have certainly enjoyed the benefits of this lately, with TI's expanding margins fueling a 36% growth rate in earnings per share in the most recent quarter.

Looking ahead, TI should be able to continue expanding margins through its ramping up of 300mm analog chips. These chips cost about 40% less to manufacture. Because they made up only about 40% of analog chip revenue last year (about $4 billion), as these chips grow as a percentage of segment revenue, TI's margin expansion may not be over.

Both companies are leaders in their respective markets and are poised to continue growing. I would be happy owning both, so the decision really boils down to valuation relative to growth expectations.

Based on analysts' expectations for earnings growth over the next five years, NVIDIA's PEG ratio is currently 2.17, while TI's PEG ratio is just 1.41. While I'm an NVIDIA shareholder and like the company's long-term potential in data centers and automotive industries, I think TI is a good choice for investors looking for growth in tech without having to pay for a high P/E.

What's more, TI returned 100% of its free cash flow to shareholders between 2015 and 2017. NVIDIA also is committed to returning capital to shareholders, but TI's higher dividend yield of 2.18% compared to NVIDIA's 0.22% might immediately tilt the scales in TI's favor for income investors.

At a forward P/E of just 19, TI has an attractive valuation, double-digit earnings growth potential, and a management committed to returning all of its free cash flow to shareholders. That makes TI the better buy, in my view.