The auto industry had huge years in 2016 and 2017, but good times don't last forever, and cyclical declines in sales volumes for 2018 and beyond now look increasingly likely. Both Toyota Motor (NYSE:TM) and Ford Motor (NYSE:F) have had to adapt to these changing conditions, but it hasn't always been easy. Despite Toyota's having located substantial production capacity within U.S. factories, potential trade disputes between the U.S. and its major trading partners are always a threat. Even U.S.-based Ford has had to navigate rough waters in making decisions about where to locate manufacturing facilities to avoid trade policy backlash.

Because of concerns about future earnings, auto stocks look like they're in bargain territory. Yet some fear the value traps that often accompany downturns in cyclical industries. To help you pick whether Toyota or Ford is a smarter investment right now, let's take a look at how the two auto giants compare on some key measures that can indicate whether they're likely to be successful in the long run. 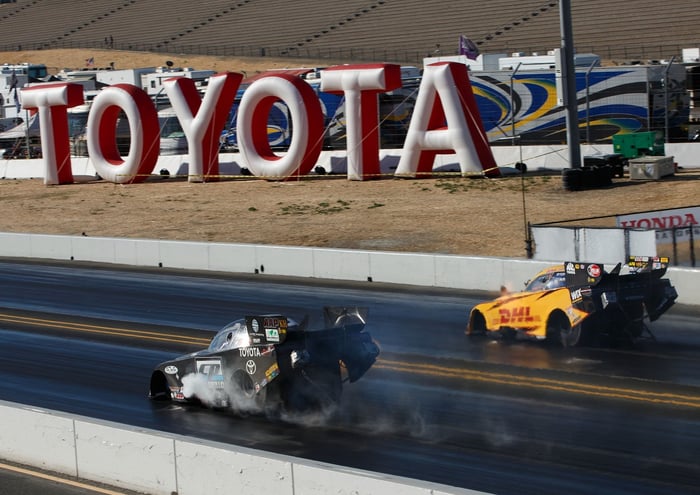 Toyota and Ford haven't had the same experience with their stock performance lately. The Japanese automaker's stock has risen 12% since August 2017, compared to an 8% decline for Ford. More recently, Toyota has been able to overcome challenges to keep its share price roughly flat, while Ford suffered a drop of almost 14% since late May.

Valuation measures based on earnings reflect this disparity. When you look at trailing earnings, Toyota has a multiple of about 8.2, which is well above Ford's 5.9. For both companies, investors already expect earnings to take a mild hit, sending Ford's forward multiple to about 7.2 and Toyota's to 9.1. That's enough to make Ford look more attractively valued than Toyota, which is consistent with the way the two stocks have moved lately.

Both Ford and Toyota pay dividends but there's a pretty wide disparity between the two automakers. Toyota's current dividend yield comes in at around 3.6%, but Ford's stock pays a more than 6% dividend yield right now.

Like many foreign companies, Toyota has a variable dividend policy, so payouts vary from year to year. However, the Japanese automaker targets a 30% payout ratio, based on its net income, with adjustments as necessary to reflect business conditions. That has given Toyota enough flexibility to afford the massive investments necessary for research and development into cutting-edge technologies like driverless vehicles and artificial intelligence. With dividends having risen gradually in recent years, Toyota looks like a stable, predictable stock that income investors can appreciate.

Ford has had a good track record of dividend growth over the past several years, bouncing back from the financial crisis that sent its two American counterparts into bankruptcy. Yet now, financial pressures have some investors nervous about whether Ford's current dividend levels are sustainable. Ford faces several challenges in generating the cash necessary to pay such a high dividend, and if a cyclical downturn adds to those challenges at exactly the wrong time, Ford might be better served using available cash in restructuring efforts rather than for dividend payments. A cut could bring the yield much closer to Toyota's levels.

Toyota and Ford have seen their prospects change as the environment for auto sales begins to look less favorable than it's been in recent years. But Toyota has responded aggressively, and the measures it took have already started to bear fruit. In the second quarter of 2018, Toyota's revenue rose almost 5% on an 18% jump in vehicle sales volumes, and net income was higher by 7% from year-earlier levels. Toyota saw considerable success in Europe, and even though sales were down in Japan, cost-cutting initiatives led to a huge 24% rise in operating income in its home market. Large incentive payments in North America weighed on results there, but sluggishness in China wasn't enough to offset good performance in the rest of the Asia-Pacific region. Despite a slight downgrade to full-year guidance, many of Toyota's predictions stayed unchanged from previous forecasts, and that reassured those who'd expected more extensive deterioration.

Ford seems to be facing a more difficult struggle. In its most recent quarter, Ford reported a bottom-line drop of more than 40%, and challenges outside the North American market were more extensive than most had expected. Chinese sales dropped 30%, and that sent Ford to a $400 million loss for its overall Asia-Pacific segment. Sales figures were better in Europe, but the company still suffered a pre-tax loss despite higher revenue. Investors aren't sure exactly how Ford will respond to these adverse trends. CEO Jim Hackett and his management team are still apparently working on the details of an anticipated restructuring initiative. What investors do know is that it could cost more than $10 billion for Ford to execute its plans, and without any specifics, they seem skeptical about whether Ford's really on the right path.

Toyota's prospects look a lot more solid than Ford's at this point, and that makes the stock a better buy even with its lower dividend yield and slightly higher valuation. Ford could easily bounce back, but there are too many questions for those looking at the stock for the first time to feel entirely comfortable about its future direction.