Go big or go home. That's a philosophy that often works in business, but for industrial giant General Electric (NYSE:GE), it hasn't been panning out so well. One of the best examples of this is the company's 2015 acquisition of French company Alstom's power and grid unit.

When the sale closed in November 2015, company bigwigs like then-CEO Jeff Immelt waxed poetic about the $10.6 billion acquisition, calling it a "significant step in GE's transformation" and claiming it would "further our core industrial growth." Sadly, the deal has done anything but. 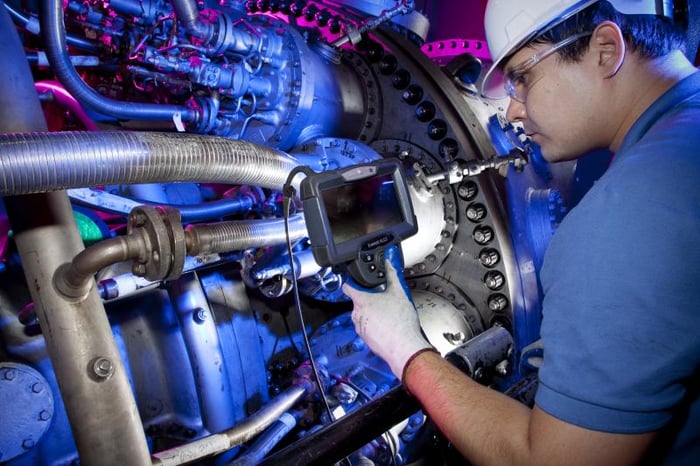 The stock market hasn't been kind to GE, in part thanks to the underperformance of its power unit. Image source: General Electric.

In 2014, when GE first announced the Alstom Power acquisition, things weren't going so well in the company's oil and gas unit. Energy prices had just collapsed, and demand for oilfield services of the type that GE provided were dropping faster than flies at an exterminators' convention.

But GE's power unit -- the company's largest in terms of revenue -- was doing comparatively well. Its 19.4% profit margin was one of the highest in the company, and sales were expanding, up 11% in 2014. Under those circumstances, expanding the power unit by making a major acquisition seemed to make sense. It would move the company away from its prior strategy of aggressively building up its oil and gas holdings and instead boost one of its core divisions.

Alstom was a logical target, thanks to numerous existing projects for which both Alstom and GE were providing equipment, including a Texas power project that would utilize four GE gas turbines and four Alstom heat recovery steam generators. Also, in some cases, Alstom and GE were bidding against one another for upcoming projects. With the acquisition, GE could turn a competitor into an asset.

Ideally, that could help GE get a leg up on its major rival in the space, Siemens (OTC:SIEGY). Finally, Alstom had a large number of existing generators installed worldwide, which meant that it brought good potential to generate high-margin service revenue.

GE's CEO Jeff Immelt hoped to eventually achieve $3 billion in cost synergies through the acquisition and generate a return on investment of between 15% and 20%. But there was one small footnote to these expectations: In Alstom's 2014 Annual Report, management noted that "excess capacity in developed markets" was a concern for its power business. This is a concern GE perhaps should have heeded more before making the buy.

Synergy only goes so far

The Alstom acquisition has been, frankly, an utter disappointment. CEO John Flannery -- who was intimately involved with the purchase as head of business development at the time -- admitted as much in a CNBC interview, saying:

We were looking at a high teens return. I'd say we're in a single-digit return. It's not an acceptable deal from a financial framework right now.

According to Flannery, while the operational synergies were largely achieved, the market for gas turbines has collapsed. Add in that it's a competitive market rife with oversupply issues -- the "excess capacity" mentioned earlier -- and you get lower sales and increased margin pressure. Certainly, GE rival Siemens is weathering the same headwinds and also has underperformed the broader market in recent years.

But some Alstom projects generated losses that the company wasn't able to make up elsewhere. In fact, goodwill from the Alstom power purchase has already well exceeded the purchase price, with Deutsche Bank analyst John Inch projecting $22 billion in Alstom goodwill impairments in Q3 2018. It would be hard to come up with a worse scenario than the current one for a deal that initially held so much promise.

Arguably, GE hasn't been so much a victim of poor strategy as it has of poor timing. Aside from a select handful of analysts -- profiled most notably in the book/movie The Big Short -- nobody saw the financial crisis of 2008 coming. But General Electric was one of the biggest victims as its financial businesses -- which at the time were contributing 40% of the company's revenue -- took a major hit.

Adding insult to injury, the company finally spun off its consumer credit card business as Synchrony Financial in 2014, which promptly began outperforming its former parent. Synchrony shareholders are sitting on a 37.7% gain, while GE shareholders have had to stomach a 48.9% loss.

Similarly, nobody saw the 2014 oil-price crash coming, so it's hard to blame Immelt for making big investments in oil and gas as energy prices were soaring. But when the crash came, it hit GE and other oil and gas services companies hard, to the point that GE had to merge its oil and gas unit with oil services company Baker Hughes to form Baker Hughes, a GE Company -- which it's now going to spin off completely.

Water under the bridge

Regardless of whether it was poor timing, poor management, or poor execution, GE is now stuck with its underperforming Alstom power acquisition and a large underperforming power unit, in general. The bigger question now is if and how Flannery and his team can turn the company's power unit around (or conversely, strategically divest some of it).

At least for now, it seems as though Flannery's strategy is going to be to cross his fingers and try to do what restructuring he can, hoping the power-turbine market sorts itself out in the next couple of years. And he's clearly putting more energy into figuring out how to optimize the company's other units. Investors also should hope he's learned from his mistakes and that his next major acquisition will help the company return to much-needed growth.