Shares of shipping giant United Parcel Service (NYSE:UPS) are up 22% off their lows of earlier this year -- but still lagging the S&P 500 by more than 10 percentage points over the past year. Can UPS maintain its momentum and pull itself out of its funk? That may depend in large part on how quickly investors believe UPS can return to free-cash-flow positive status, as one Wall Street analyst opines in an upgrade covered on TheFly.com this morning. 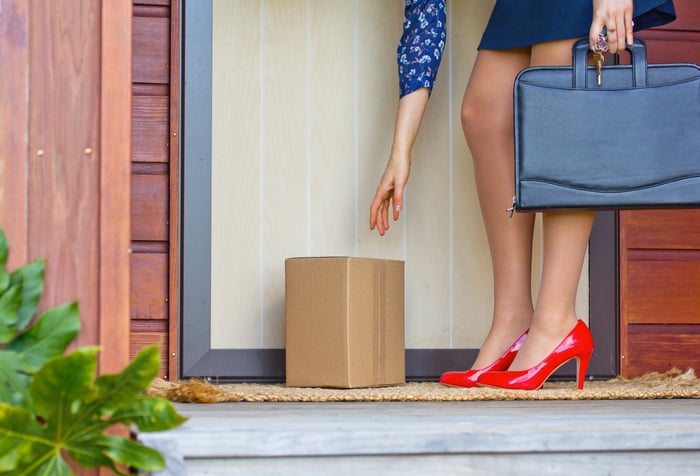 Early this morning, investment banker Raymond James announced it's upgrading UPS two notches -- all the way from market perform to strong buy -- with a price target of $150 a share. Raymond James' reasoning: Although UPS may not be generating positive free cash flow today, a combination of factors, properly implemented, promise to yield annual cash profits on the order of $8 billion per year by as early as 2021.

This is a bold prediction. According to analysts surveyed by S&P Global Market Intelligence, the consensus on Wall Street is that UPS won't hit $8 billion in positive free cash flow before 2022 at the earliest, and probably not even then.

That being said, most analysts do agree that UPS will resume generating at least some free cash flow, and perhaps as early as this year. That would be good news for shareholders -- if the analysts are correct.

UPS, you see, turned free-cash-flow negative last year. After a full decade of never having to spend more than $3 billion on capital investment in a given year (and some years, spending much less than that), last year, UPS suddenly doubled its rate of capital investment in a bid to upgrade its facilities and improve its efficiency to deal with the surge of just-in-time ordering among its e-commerce customers.

In 2017, the company spent $5.2 billion on capital investment, or about 3.5 times more than the $1.5 billion it generated in cash from operations. The surge in spending late in the year means that, over the trailing 12 months, UPS remains free cash flow-negative to this day.

In even worse news for investors, UPS management warned that it would need to invest "between $6.5 billion and $7 billion" in capex in 2018, and then keep on spending at levels approaching 10% of revenue for "the next few years." When you consider that UPS hasn't generated positive cash from operations in excess of $6.5 billion since 2015, this implies the company will have trouble generating any positive free cash flow at all until its capital investment plan has run its course.

That's what went wrong. Now here's what could go right: According to Raymond James, implementation of UPS' "Smart Logistics Network" is costing a lot now, but the heightened capital spending required to build it will eventually ramp back down just as it ramped up in 2017. Perhaps more importantly, once fully implemented, this network should help to save UPS about $225 million worth of annual "operating penalties." The analyst further expects UPS to be spending less on discretionary pension contributions come 2020.

With a lighter financial load, Raymond James projects that two years from now, UPS could be generating $8 billion or more in positive free cash flow annually -- more cash profit than it's ever made before.

So what would that mean for investors?

Assuming Raymond James is right, then with $8 billion in annual cash profit, UPS stock at its current $106 billion market capitalization is trading for just 13.5 times 2020 free cash flow. What's more, if you take UPS' dividend yield of 3%, and assume a modest long-term growth rate of 10% or so, then this should make UPS stock fairly valued if it succeeds in generating $8 billion in annual free cash flow (that's assuming the stock sells for the same price in 2020 as it does today, though).

That being said, I cannot say I'm completely comfortable investing at a set price for UPS stock today in anticipation of profits that might or might not roll in more than two years from now. With all due respect to Raymond James and its optimism, for the time being I have to say that I consider UPS more of a hold than a buy.