Jeremy Bowman, Travis Hoium, and George Budwell
(TMFHobo)
Author Bio
Fool since 2011. I write about consumer goods, the big picture, and whatever else piques my interest. Follow me on Twitter to see my latest articles, and for commentary on hot topics in retail and the broad market. Follow @tmfbowman

The financiers and analysts on Wall Street may be known as the "Masters of the Universe," but that doesn't mean they're infallible. In fact, Wall Street's own oversights and biases are part of what makes the market so volatile and creates opportunity to individual investors like us.

The professionals also have a habit of giving up on stocks that are no longer fashionable or may have fizzled out, again offering an opening for retail investors. See why these three fool.com contributors believe Novavax (NASDAQ:NVAX), Shake Shack (NYSE:SHAK), and Apple (NASDAQ:AAPL) are these kinds of stocks. 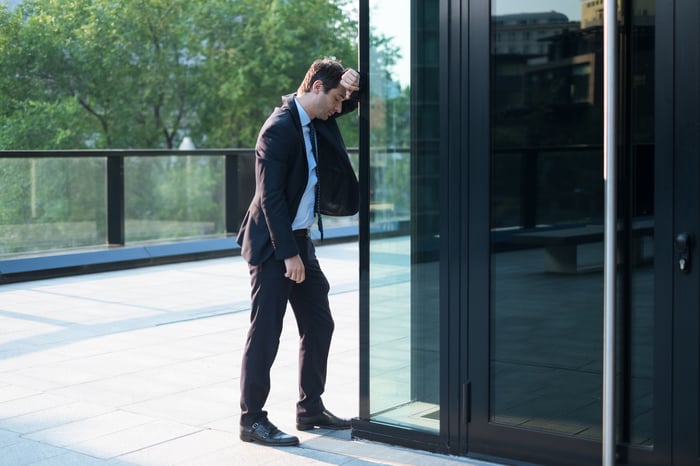 Don't sleep on this downtrodden biotech 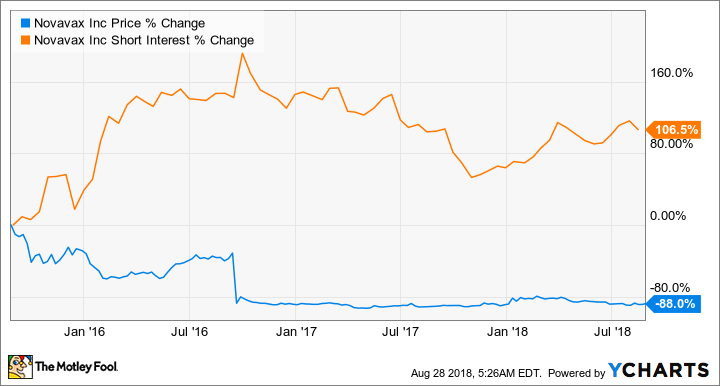 Novavax's slew of clinical updates during its second-quarter earnings release, however, suggests that a dramatic turnaround might be in the cards. Most importantly, the biotech's late-stage ResVax vaccine -- designed to confer immune protection against RSV to infants still in the womb -- is reportedly heading toward a pivotal readout in the first quarter of next year. That's tremendous news for Novavax, as the cash-strapped company could finally be nearing an all-important regulatory filing.

How important is ResVax to Novavax's value proposition? First and foremost, this single vaccine is projected to generate a healthy $668 million in sales by 2024, according to a recent industry report by Evaluate Ltd. Putting this sales estimate into context, Novavax's present market cap is only $531 million.

The bigger story, though, is that a successful late-stage readout would go a long way toward validating Novavax's broader vaccine pipeline. And that's where this story gets truly interesting.

At the moment, Novavax sports the single most valuable vaccine in development -- a combination flu and RSV vaccine in preclinical studies. This combination vaccine is predicted to eventually generate more than $1.8 billion in global sales -- a figure that dwarfs Novavax's current market cap.

All that being said, Novavax still has to get over the hump with its upcoming late-stage trial readout early next year. But there's at least a glimmer of hope that Wall Street might be dead wrong about this beaten-down biotech.

Jeremy Bowman (Shake Shack): The rap on Shake Shack is familiar. Bears, many on Wall Street, argue the fast-casual chain is significantly overvalued -- treated like a tech stock, rather than a restaurant company subject to the usual constraints of a brick-and-mortar business.

Critics also say the stock has benefited from a New York bias, as the Manhattan-based chain has a large fan base in New York City, overlapping with the investor community. That may be one reason why Shake Shack stock surged to nearly $100 out of the gate in its 2015 initial public offering.

While the stock pulled back after that, the burger chain has since proven its mettle: Shares are up 37% as it's briskly opening high-volume stores and crushing Wall Street estimates. And its store openings in Asia are drawing crowds like few restaurants in memory.

However, the SmartConsensus report rates the stock a sell; Thomson Reuters (a SmartConsensus component) has a negative view on it; and Market Edge says to avoid. The average price target among analysts is $58.50, slightly below where the stock trades today.

Still, Shake Shack has consistently outpaced Wall Street estimates. The burger chain has beaten earnings expectations every quarter except one (when it matched them), as the experts seem to be underestimating its profit growth. The stock may be expensive at 84 times trailing earnings, but Shake Shack has a long growth path ahead, with plans to grow from 100 domestic company-operated locations today to 200 by 2020, and 450 eventually. With average unit volumes above $4 million, a level matched only  by Chick-fil-A, Shake Shack isn't your average quick-serve chain. The stock deserves a pricey valuation, and its ongoing expansion should ultimately be more than enough to justify it.

Travis Hoium (Apple): It may be overstating the case to say that Wall Street has given up on Apple, but the fact that institutional investors are selling the most valuable company on U.S. markets at the peak of its power is striking. But that's exactly what has happened, with investors selling 72 million shares in the second quarter of 2018, after selling 153 million shares in the first quarter.

Why are funds giving up on Apple just as it passes $1 trillion in market cap? The reason could be as simple as Apple's size. It's much easier to see upside from companies that are small and have the opportunity to double or more in size. It's hard to see Apple doubling its market cap and becoming a $2 trillion company.

While large investors are selling Apple shares, I think we're seeing the company only get stronger as an investment. No company has more power or makes more money in the smartphone business, and Apple continues to use that position to expand revenue and profit. Macs and iPads are the adjacent products most people think of with Apple, but I think its recent success can be seen in the Apple Watch, AirPods, and Apple CarPlay. The Apple Watch has become a common smartwatch for consumers, while it seems AirPods can be seen on every block. CarPlay has even become a nearly standard feature in most vehicles.

If you take a long-term view of Apple, you can see these products adding to the company's ecosystem and holding on to consumers. That helps drive growing cash flow per share, as you can see below, and ultimately a higher stock price. 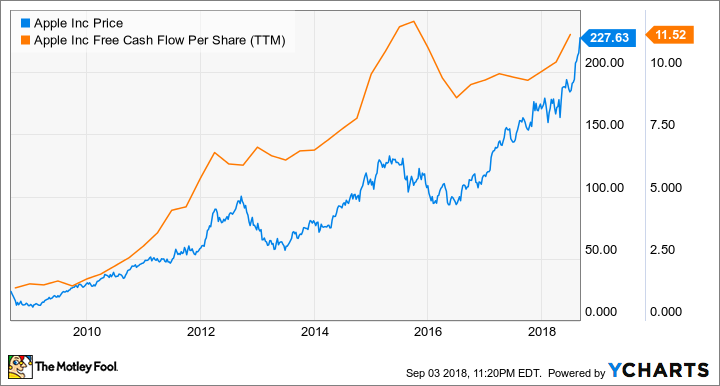 Institutional investors may be seeing more growth opportunities elsewhere, but I think Apple still has a bright future, even if it's just growing cash flow with small product extensions and paying a growing dividend to investors.